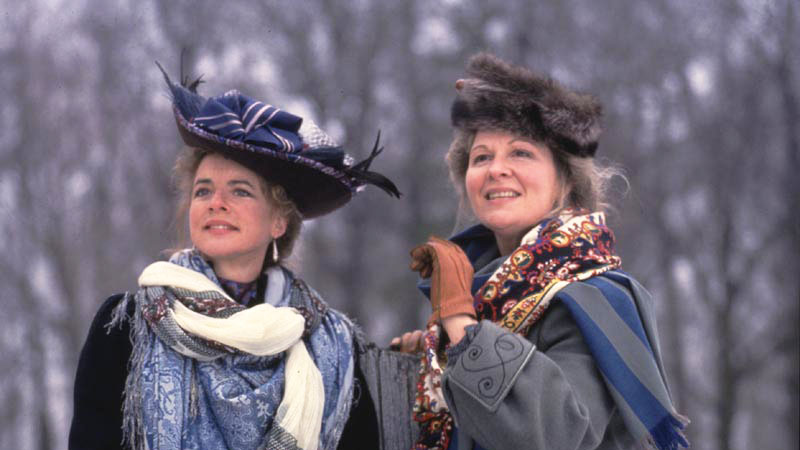 Viola and Janet cause a town uproar and the church committee calls for John Elliot's resignation.

Janet continues her friendship with Viola Elliot and the two wreak havoc at the skating party. Viola is bored and feels like a stranger in the town; and so Janet convinces her to present a magic lantern show, showing the many places and cultures she has visited.  Ullele Bugle, hoping to see a leper colony rather than half naked people, is horrified with the presentation and quickly ushers the attending children out of the room.

Viola introduces Janet to her tonic and the two women quickly become drunk. They take Muriel Stacey's model T for a joyride and end up crashing behind the general store. The town reacts in an uproar from Viola's behavior and the church committee informs John Elliot that he must either discipline his wife or seek a post as minister elsewhere. The reverand refuses, which causes the committee to call for his resignation.

Janet discovers that Viola was using the tonic to aleviate the pain of a back injury she experienced during a typhoon. When the committee learns about Viola's delicate condition, they change their decision on ousting the new reverand.

John Elliot however, admits that he has accepted a post in New Brunswick so that Viola could be closer to a hospital that could provide medical care.

In retrospect, I'm surprised that Disney didn't edit this scene with Janet and Viola's joyride because it dealt with drunk driving. I'm not condeming the scene in any way. It's a part of reality, but it's kind of a risky move for a series that is supposed to be considered 'family entertainment.'

Make no mistake, this isn't criticism about this episode. This criticism is directed toward the television writers that won't take 'Road to Avonlea' seriously because it's considered 'family entertainment.' Sometimes I think that the term 'family entertainment' distracts people from the true brilliance of this series.

Oblivious television critics who only watch the episodes which feature prominant American actors are completely unaware of the complex depth of this show and tend to lump it into a category with other family shows like 'Torkelsons' and 'Alf.'

Television critics should realize that the shows with American stars are not the best episodes. They were only written because the Disney channel required that Sullivan include American actors. While they are not necessarily the worst either, they don't represent the depth of what the show is all about.

Wouldn't you like to try some of Viola's elixir?

"Why should the young have all the fun? There's still some kick left in this girl." -Janet King

"My own mother and the minister's wife are behaving like a pair of teeners." -Felicity King

(1) Stockard Channing was nominated for an Emmy for 'Outstanding Guest Actress in a Dramatic Series' and a Cable Ace Award for 'Best Actress in a Dramatic Series' for her role as Viola Elliot. Channing made another notable appearance in the movie 'Grease' where she played Betty Rizzo. It's funny to note that she was in her thirties while playing the role of the teenage Rizzo.

(2) In an ironic twist that mirrors the recklessness of Viola Elliot, Stockard Channing was arrested for investigation of drunk driving while trying to drive around a roadblock on the Hollywood Freeway in January 2005.  Channing's blood-alcohol levels were .12 and .13.  The legal limit in California is .08.

(3) Alec comments that the church roof is finally paid for. This must mean that Reverand Leonard never paid the money he won from gambling in 'Misfits and Miracles' for the church roof. Leonard's earnings would have covered the roof, but recall that he disappeared shortly after the Misfits beat the Avengers. This suggests that he could have either skipped town with the money or was busted by his peers for gambling. No wonder the town doesn't talk about his disappearance.

This might be the closest we'll ever get to 'Grease' in Avonlea. Thankfully, Booth and Sara never broke into a rendition of 'Summer Loving.'