Recently I received a question asking when Anne Shirley was born. There seemed to be a date floating around that is being widely accepted on the internet: March 5, 1865.

But is it accurate and where did it come from?

When I Googled 'When was Anne Shirley of Green Gables born?" the top result displayed the date "March 5, 1865." For the fun of it, I asked Alexa and received the same response! 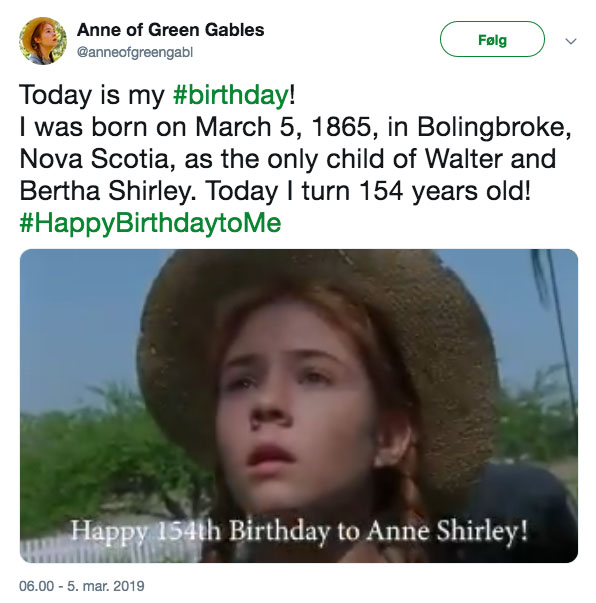 Montgomery leaves several clues about the general time of Anne's birth. In Anne of Green Gables 'Chapter V - Anne's History' Anne tells Marilla that she was born in March: “I was eleven last March,” said Anne, resigning herself to bald facts with a little sigh. “And I was born in Bolingbroke, Nova Scotia."

In Chapter 13 of Anne of Avonlea, Diana mentions that Anne's birthday is in March.

"I was just on my way over to invite you to help me celebrate my birthday on Saturday," said Anne.

Anne's birth year of 1865 is estimated at the Chronology of the Anne Books, based on the approximate ages of Anne's children, Anne's marriage to Gilbert at age 25 (Anne's House of Dreams, Ch 2), and other clues in the Montgomery works.1

While it can be determined with certainty that Anne's birth month was March and there is compelling evidence that her birth year was 1865, this specific date of March 5th is not mentioned in any of L.M. Montgomery's books, short stories, or personal letters. So where did it come from?

I discovered that the mystery date was referenced on the Anne Shirley Wiki page as coming from Budge Wilson's 2008 prequel Before Green Gables. In this work, it's mentioned that Anne is expected to be born in mid-March (Chapter 5) and that she was born on a Friday (Chapter 6). SusannahWithAnH informed me that her birthdate is mentioned in Chapter 34.2

"That's a long time ago. Six years ago on the fifth of March I was born. That's my birthday."  - Anne Shirley, Before Green Gables

So this should answer the question right?

It turns out there is some dispute among Montgomery scholars whether this date should exist in Anne's continuity because L.M. Montgomery did not write the work. On the other hand, Before Green Gables was a prequel specifically authorized by the LMM Heirs as an "official" prequel to Anne of Green Gables.

There are literary precedents where an author's family or estate authorizes official canonical works written after the author's death. In 2014, the estate of Margaret Mitchell approved "Ruth's Story", a prequel to the southern civil war novel Gone with the Wind, in an effort to flesh out the story of Mammy's early history.

Similarly, Budge Wilson's central purpose for Before Green Gables was to explain how Anne Shirley became such an imaginative and intelligent child after enduring a harsh and restrictive upbringing. Wilson sought to answer a critical question left unanswered by L.M. Montgomery, and in doing so, took a literary license and declared Anne's birth date!

While Montgomery purists may dismiss this date, the Montgomery Heirs have given this work their official stamp of approval.  The collective digital consciousness of internet search engines and social media have accepted March 5, 1865 as the gospel-set-in-stone birth day of our beloved heroine.

Should Before Green Gables be accepted as part of Montgomery's literary canon? Let me know in the comments below!

1 Chronology of the Anne Books