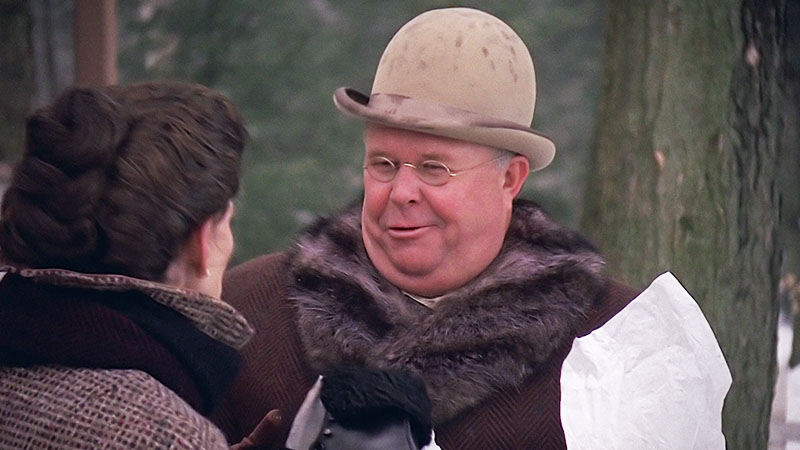 The traveling shoe salesman, Wally Higgins, comes to Avonlea and becomes enthralled by Hetty's shoe size. Wellington Campbell claims that he owns part of King property, which sparks an inevitable conflict with Hetty.

After terribly misinterpreting Hetty, Wally Higgins asks her to marry him and announces this in front of the entire town at the winter skating festival. This naturally sends Hetty into an uproar, pushing Higgins and vehemently rejecting his engagement.

Wellington Campbell claims that his property extends into king property and begins to take down the back fence at Rose Cottage.  Hetty finds documentation that the property belongs to the King family and accidently hammers Campbell's hand while mending the fence.

Hetty is sued by both Higgins and Campbell and comes up with a scheme to get out of paying the lawsuits. Hetty agrees to allow Campbell to own half the property if he will pretend to be her fiance in order to make Higgins drop the lawsuit.

Felicity tries to get Sara to encourage Gus to invite her to the winter skating festival, but Gus refuses to attend. Felicity learns that Gus couldn't skate and that his own pride prevented him from revealing this shortcoming.

After a brief fight (if you can call it that) between Higgins and Campbell, Higgins sees Hetty tending to Campbell and decides to leave her alone.

The possibility of Hetty's shoe size being the exact type that Higgins desired was about as far fetched as Marilla's ordeal with Duncan McTavish (1.4: The Materializing of Duncan).

Hetty pretending to be Wellington Campbell's fiance is absurd and it completely contradicts the character's personality.  Hetty would not have put her credibility, or her families credibility, on the line in a way where the town would see her as creating a deception.

The fight scene between Campbell and Higgins has to be one of the worst in television history, probably because they attempted to make it comical. It looked like they were hugging, not brawling; and I even think you can see Campbell smirking during the altercation.

Having a comical episode is one thing, but by making the moments that are suppose to be dramatic comical, they turned this episode into a parody of Avonlea.

Can they make Wellington Campbell look any more absurd?

If Hetty is so concerned about losing credibility (from the lawsuits), then why is she lying to the town about being engaged?

"We have more spinsters here than a cat's got whiskers." -Rachel Lynde

"You get away from me you hair-brained lunatic!" -Hetty King (to Wally Higgins)

(1) During this episodes first airing on the Family Hour, CBC showed a commercial for a nightly newscast about Montreal strippers and prostitutes. As the salacious spot aired, Newswatch anchor Dennis Trudeau provided the voice-over.  According to the Gazette:

"Women who do the same old grind," Trudeau sneered, as the promo cut to a street prostitute plying her trade at curbside, "and some who bring traffic to a grinding halt."  Bouncing buns and a purse-swinging hooker brought Road to Avonlea to an abrupt halt at our house as we dove for the remote-control clicker.  It was too late. Our young Family Hour fan had travelled from the sun-splashed Road to Avonlea down the slippery slope to midnight on Rue Ste. Catherine.

(2) The Skylark paperback edition of this episode, written by Fiona McHugh, is a rare find and sells on Amazon for a hefty price between $347 and $883.  The reason this book is so expensive is because the Skylark Road to Avonlea series was cancelled during the printing of this edition and therefore there are few "Calamitous Courting..." books available.  This is ironic, considering that the Skylark series was likely cancelled due to poor sales.  The paperbook was released on April 1, 1995--over three years after this episode first aired--and was the 28th and final book printed.

(3) Ned Beatty has been in many movies, including 'Superman' (1978) with Christopher Reeve (aka Robert Rutherford) and 'Deliverance' (1972).

There was too much comedy during moments that should have been dramatic, which killed the believability.