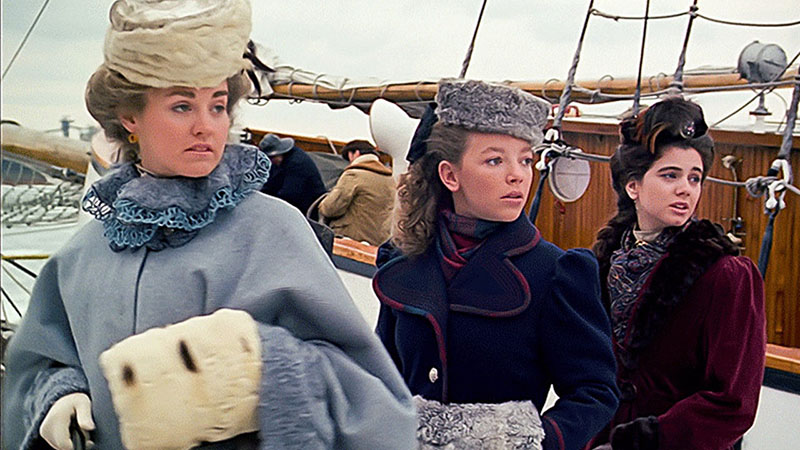 Felicity is invited to apply for a full scholarship at Kingscourt Ladies College in Nova Scotia. In an effort to impress her fellow Kingsport peers, Felicity claims that her real parents were dead and that she was the inheritor of a vast fortune.

After Felicity receives the invitation to apply for scholarship at Kingsport College, most people's lives appear to change. Gus Pike is perhaps the most hurt from the news because of the possibility that he may never see Felicity again.

You might recall that Mr. Methley was played by John Neville (3.7: A Dark and Stormy Night), but because Neville's performance was a one time deal, we only hear his name mentioned as the proprietor. Pierre Lapierre is hired as the head chef at the White Sands Hotel and takes a liking to Felix King after Felix expresses his enjoyment for Pierre's french cooking.

Felicity borrows Sara's french dresses and attempts to learn about exotic cousine from Pierre in order to appear sophisticated when she arrives at Kingsport College. Felicity evokes her mean spirited behavior that she exhibited toward Peter Craig in the first season when she calls Gus a 'country boy' in front of her Kingsport roommates.

Intimidated by her wealthy college peers, Felicity tells the Kingsport girls that Alec and Janet were not her parents and that she inherited a fortune when her real father died, thus, assuming the identity of Sara Stanley. Felicity eventually confesses her deception when the Kingsport Committee requests to speak with her parents.

Isn't it strange to see Sally and Jane actually praising Felicity at the beginning of the episode?

Wasn't it typical that Sally and Jane were ridiculing Felicity at the end of the episode?

"Good breeding and polite manners are very important. How else can one improve their position in life." -Felicity King

"Talk is cheap Sally Potts and so are you." -Felicity

(1) In a Disney promotion video segment, Gema Zamprogna reflected on this episode. "One of my favorite shows to shoot was the episode called 'High Society' when Felicity applies for the Girls' College," Gema recalled.  "They gave me a chance to work on my own character a little more."

(2) Kerry and Christon observed that Felicity continues to wear the dresses that Sara let her borrow for many years after this episode.

(3) The interior and exterior of Penryn Park, a golf and country club, were used as Kingsport Ladies College. The interior was also used for the interior of the Lloyd estate in the episode 'Old Lady Lloyd.'

Felicity finally gets knocked off her high horse!