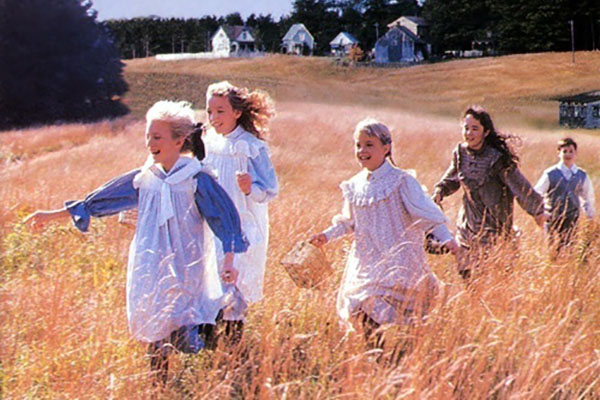 During its run in the 90's, Road to Avonlea was one of the highest rated, most awarded and highly revered series on Canadian television.  However, it's interesting to note that the series almost didn't happen.  Below, I detail five things that almost prevented this show from existing, at least how we know it!

Can you imagine another actress as Felicity King?  In the weeks leading up to the production of Road to Avonlea, Gema Zamprogna (Felicity King) was heading to Winnipeg to star in the CBC made-for-TV movie ‘The Challenge,’ later to be re-titled ‘The Challengers.’ Gema played the lead role as a 12 year old girl who impersonates a boy to join a boys-only club.

"I'd auditioned her for an earlier Sullivan film and her talent was like a clear white light shining through," acting director Anne Tait remembered. "But everyone said 'She's going to Winnipeg, just give up on her.'"  Anne Tait tracked down Gema en route to the airport and managed to obtain a tape of her reading for Felicity. The scheduled filming for Road to Avonlea was delayed one week, allowing Gema to accept the role as Felicity King.  Without Tait's intervention, the role might have been played by Tara Meyer (Sally Potts) who auditioned in June 1989.

In the late 1980's, CBC only had enough money to produce one hour long drama and two programs were in competition: ENG (1989-1994), based on life in a television newsroom and Road to Avonlea.  Although Director of CBC television programming Ivan Fecan would later regret letting ENG get away, the network ultimately chose Road to Avonlea.

Fecan clearly made the right decision by dropping E.N.G.  The dull soap opera was almost cancelled in the first season and received poor ratings when it was shown on Lifetime Television (probably bumped for some god-awful Meredith Baxter Birney film).  The publishers don't even want this out on DVD!  Besides, the soap opera's sexual themes would have gone over like a drunk Viola Elliot in church if it aired on CBC's Family Hour.

3. We Could have had a different Story Girl

In early 1989, Sarah Polley had several acting options that could have prevented her from siezing the pivitol role of Sara Stanley.  Polley auditioned for the role of Cher’s daughter in ‘Mermaids (A role that went to Christina Ricci),’ a starring role as Annie in the bizzare "Annie and Daddy Warbucks Go To Budapest," and a part in the chilling ‘Small Sacrifices’ about an infamous child murderer.

The planned filming for Small Sacrifices in June 26 in Vancouver conflicted with filming for Road to Avonlea and it became apparent Polley's camp would have to decide between the two projects. After serious discussions with Sullivan, Sarah and her family accepted the role of Sara Stanley in the new series.

It's interesting to wonder how things would be different if another actress put on the Story Girl's satin blue slippers.  Would the new actress enjoy her role and stay on as a regular cast member for the full seven seasons?

There were apparently people upset that US television shows had a strong presence on Canadian television.  In 1987, Ivan Fecan was appointed director of CBC television programming “with a mandate from then vice-president Denis Harvey to shake things up.” Around this time, only 78 percent of television content in prime time was Canadian.  Fecan was committed to changing this trend by increasing Canadian content and popularizing Canadian drama on CBC.  This new direction by CBC was critical for the success of Road to Avonlea.

In 1983, the Canadian federal government committed $265 million over five years to expand Telefilm Canada and establish the Broadcast Fund. The Fund invested in privately produced weekly series miniseries and specials popular in Canada. The Broadcast Fund also provided the opportunity and resources necessary for Sullivan to create a Canadian mini-series.

Despite CBC’s commitment to the series, the network could only pay part of the $15 million total budget ($1.2 million per episode) required to produce the show (in addition to Telefilm Canada’s 2.5 million investment). Sullivan was reluctant to accept financial support from The Disney Channel, fearing they would try to “Disney-fy” the series. He ultimately relented, realizing that Disney’s financial investment of $8 million was critical to achieve the standard of quality he envisioned.

Learn more in the first chapter of the Behind the Series section: The Bend in the Road.