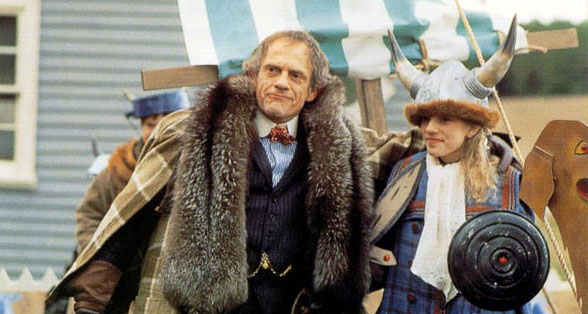 A hoax is described as a humorous or malicious deception, often synonymous with a practical joke, trick or prank.  The series Road to Avonlea has it's share of hoaxes and pranks played on our unwitting villagers.  I was surprised with the sheer number of hoaxes and it was somewhat tough to narrow it down to the top ten.  So without further ado, the following list details the top 10 hoaxes from the series.

Sara and Felix attempt to prevent Edwin Clark's plans to marry Olivia by seeking the help of Peg Bowen. The witch of Avonlea concocts a love potion that will force Olivia to become betrothed to the first unmarried man she sees. Their plan fails however, when Olivia drinks the potion and greets Felix at the door of Rose Cottage, rather than Jasper.

Snibb's World Renowned Traveling Midway arrives in Avonlea and Davey is entranced by the mysterious Melusina, who claims to be a mermaid.  The woman is really named Trissy and she cons Donny Lester into giving her money.  It doesn't take long before Donny and Davey realize they have been conned.  When Hetty and Rachel find out, they are inexplicably shocked to find that the carnival is out to get their money! Irate townspeople storm the midway and Snibb is arrested.

Sara Stanley and Andrew King receive a rude welcome to Avonlea when their cousins send the duo plummeting through a trap door into a muddy pig stall.  The visiting cousins plan their revenge by giving Felix and Felicity magic seeds with the promise that if they wish upon them at night, their dreams will come true.  The seeds, of course, are a hoax that make the scheming Felix and Felicity look foolish.

When Clive and Muriel announce their wedding, Davey and his friends plan to raise money to buy the couple a present. The troublesome Davey meets two ruffians, Hawk and Quint, who tricks the gullible boy into leaving money at the cemetery, promising that the profit will double the following day.  The foolish friends return the next day and find that the money is gone! Dora rushes to Davey's rescue and devises a plan to retrieve the money from the thieves.

6. Marilla had a Beau

Marilla Cuthbert fabricates a beau named Duncan McTavish after village gossips pry into her romantic life. The consequence of Marilla's white lie results in disaster as the real Duncan McTavish arrives in Avonlea, which raises the suspicion of her long time friend Rachel Lynde.

Cantankerous lighthouse keeper Ezekiel Crane recruits Gus Pike to help him pursue an elusive treasure.  The treasure hunt ends in a sea cave where Crane's rival, Captain Borden, plunges Crane into the depths and believes that he has the legendary treasure. To Gus's surprise, Crane faked his death and escaped with the real treasure, leaving Borden with an empty chest.

History is full of prophesies declaring that the world will end.  As a lunar eclipse approaches in the episode Vows of Silence, Felicity believes that judgement day is at hand and is encouraged to confess past wrongs.

Hetty resigns as school teacher after being criticized for pushing her students too hard for an upcoming history bee. An eccentric actor, Alistair Dimple, replaces Hetty and teaches the children through a method of play-acting and theatrics.  As the competition approaches, Alec discovers that Dimple was a total fraud without teaching credentials.

There have been many other imposters in Avonlea, including Jo Pitts as Sara Stanley, Simon Tremayne as a bellhop, Doyle E. Reichenback, various imposters from Zak Morgan's wild west show and even Sara Stanley as the long lost daughter of Callamity Jane!

2. Blair Stanley returns from the dead

Sara Stanley goes to a carnival where she encounters a fortune teller, Isis, who promises to reunite the Story Girl with her recently deceased father.  A seance is staged where Isis and her accomplice, Leo, pretend to evoke the spirit of Blair Stanley. When Sara discovers this elaborate hoax, she is kidnapped by the duo and held for ransom.  Alec heroically rides to Sara's rescue and the malicious con artists are sent to prison.

1. Felicity was switched At Birth

Sara and Felix devise a scheme, writing a letter stating that Felicity was switched at birth with Sally Potts. The hoax sends Felicity into an identity crisis and causes an uproar between the King and Potts families.  A panic ensues, which causes Janet King and Clara Potts to redefine their perspectives of motherhood.