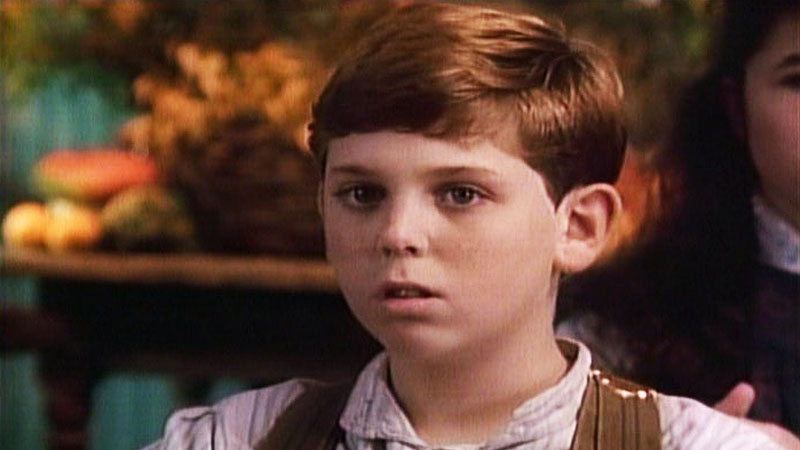 Peter Craig was destined to be the lead male protagonist of the series Road to Avonlea. Lucy Maud Montgomery intended for the hired boy to improve his social standing, become a minister, and marry Felicity King. Instead, he sadly faded from the series and was replaced by another poor yet noble outsider, Gus Pike.

So what went wrong?  Was the wrong actor chosen?  Was the writing insufficient?  Was it a lack of fan support?  Who is to blame for the failure of Montgomery’s number one choice for leading male character and the future husband of Felicity King?

Would Anne fans accept it if Gilbert Blythe was easily dismissed as a weakling and replaced with a strapping Sullivan-picked new comer in ‘Anne of Green Gables?’

Of course not! Anne fans would rise up and revolt with pitch forks and torches in hand! There would be scholarly outcries of “desecration” and wailings that Sullivan ruined Montgomery’s revered work.

So why aren't Road to Avonlea fans outraged about the dismissal of Peter Craig? 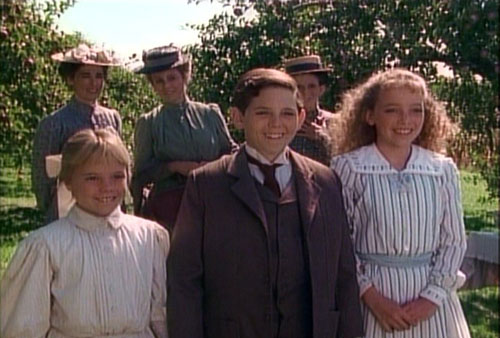 During the Story Girl’s prophesies in ‘The Golden Road,’ Sara says that Peter will become a minister and that Felicity will marry a minister. This story draws closely from Montgomery's own life and her marriage to a minister. Lucy Maud Montgomery and Reverend Ewen Macdonald were married in 1911, the same year that 'The Story Girl' was released.

Peter Craig is one of the rare male protagonists to receive positive criticism from Montgomery scholars. According to Dr. Elizabeth Epperly, “Peter Craig, the hired boy, stands out as one of the most convincing boys Montgomery created.“

When we first encounter Peter in the Montgomery books, he is described as "a slim, shapely fellow, with laughing black eyes and thick black curls."  His description and social status appears amazingly similar to the first impressions of Gus Pike:

Early in the season as it was, he was barefooted. His attire consisted of a faded, gingham shirt and a scanty pair of corduroy knickerbockers; but he wore it with such an unconscious air of purple and fine linen that he seemed to be much better dressed than he really was. 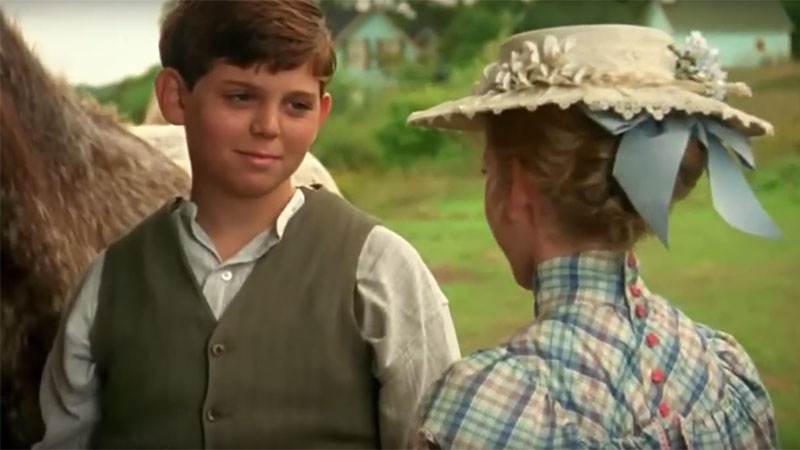 The origins of Peter Craig are generally consistent with the depictions in Montgomery works.  While his mother is a washer and his father is absent, Peter earns his keep as a hired hand at Rose Cottage. Similar to the first impressions of Gus Pike, Peter lacks social sophistication and is described as “belligerent” with “no filter.”

Similar to Felicity's first impression of Gus Pike, she considers Peter Craig to be nothing more than a hired boy.  This becomes clear in an early reference to Peter in 'The Story Girl':

“He is your Uncle Roger’s handy boy,” said Uncle Alec. “His name is Peter Craig, and he is a real smart little chap. But he’s got his share of mischief, that same lad.”

“He wants to be Felicity’s beau,” said Dan slyly.

Felicity tossed her golden head and shot an unsisterly glance at Dan.  “I wouldn’t be very likely to have a hired boy for a beau,” she observed.

In ‘The Story Girl,’ Sara asks Felicity why Peter is “sulking” in the granary. Felicity explains that Peter tried to kiss her and she “boxed” his tingling ears “good and hard.”

“I don’t know about his feelings,” said Felicity, with an angry toss of her shining head, “but I guess I made his ears tingle all right. I boxed them both good and hard.”

“Well, he tried to kiss me, that’s what for!” said Felicity, turning very red. “As if I would let a hired boy kiss me!” 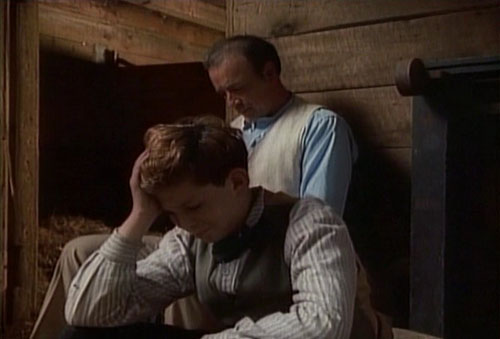 Sara says that Peter is “sulking” in the granary, but he is not crying and broken like he is in ‘Conversions.’  For some strange reason, writer Patricia Watson portrays Peter Craig as an incredibly weak character and not the bold resourceful character from the Montgomery literature. Instead of taking problems on head first, Peter is completely incompetent.

Was the actor who played Peter Craig, Miklos Perlus, too weak to play the leading male protagonist? We may never know as he was never given a chance.

As a result of Watson's weak characterization, Peter Craig never recovers his true purpose in the series as Montgomery's choice for leading male protagonist and Felicity's future beau.  Ironically, this "sulking" incident in 'The Story Girl' leads into Sara’s telling of “How Kissing Was Discovered”--The identically titled episode that launched the romance between Gus and Felicity.

In both 'Conversions' and the Montgomery works, Peter becomes deathly ill.  The King children procur a remedy from Peg Bowen that helps cure the sickly boy. 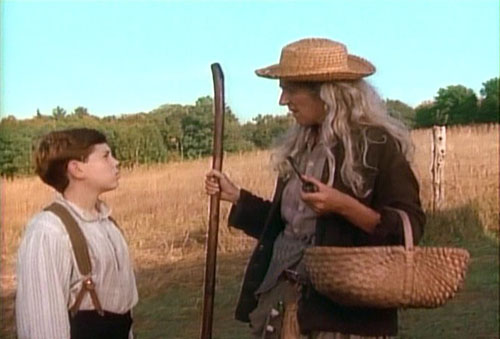 Inexplicably, Peg Bowen's empathy for Peter is never fully explained in the series, outside the implication that both Peg and Peter are fellow outsiders marginalized by their peers.  Montgomery's works however, paint a clearer picture of this relationship.  According to the Story Girl, Peg Bowen was the beau of Peter's father, Jack Craig--which explains Peg's almost maternal protectiveness. Why the series chose not to explain this relationship is unknown.

Peter's sickness brings the King family together and softens Felicity's criticism toward the hired boy. 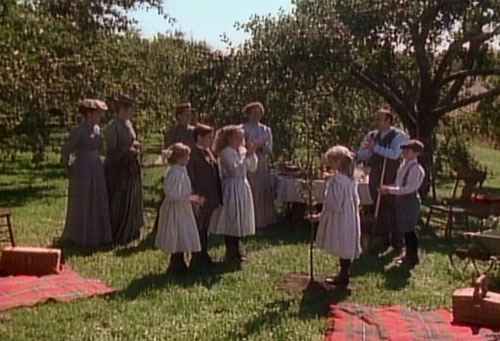 The final moments of Conversions show the King family gathered in the orchard and presenting Peter with a tree in his honor. The scene plays out more like a funeral for Peter Craig, as the character would never overcome the stigmatism of this episode. 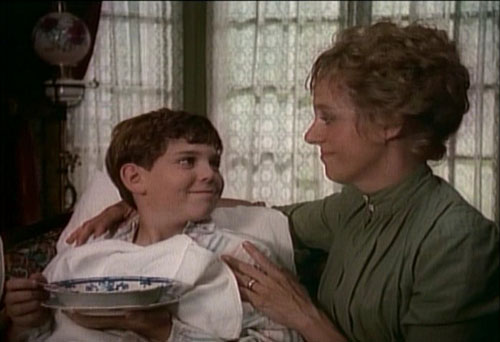 Other than his appearance in Conversions, Peter appears sporadically throughout the first and second seasons and his eventual departure has no real significance and receives no fan fare.  The Montgomery literature takes a more endearing approach as it's explained that Peter will leave for Markdale to live with his reunited parents. In one passage, Felicity expresses that she will miss the boy for whom she has found great affection:

“But you must come and see us often,” said Felicity graciously.  Markdale isn’t so far away, and you could spend every other Saturday afternoon with us anyway.”

“That’s so kind of you, Felicity. I’ll come as often as I can, of course;

Peter's adoration for Felicity is clearly realized in his poem for her on her birthday.  Peter writes:

Oh maiden fair with golden hair
And brow of purest white,
Id fight for you I’d die for you
Let me be your faithful knite. 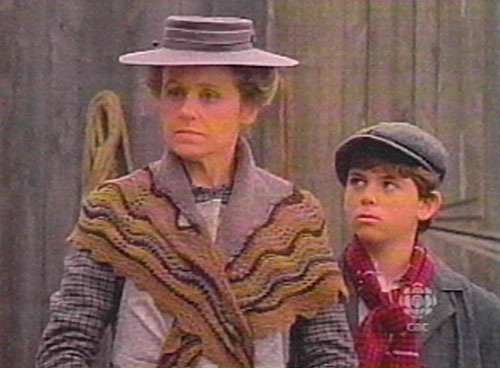 In the series however, Peter is not Felicity's shining knight.  By the time Peter Craig returns in ‘Aunt Janet Rebels,’ he is simply used as a plot device after his mother, Maud Craig, is depicted as a victim suffragette.  It is Sara who encourages Peter to visit Margaret McCorkndale to convince her to take action against her husband's unfairness. Peter is apparently too incompetent to come up with a plan by himself. 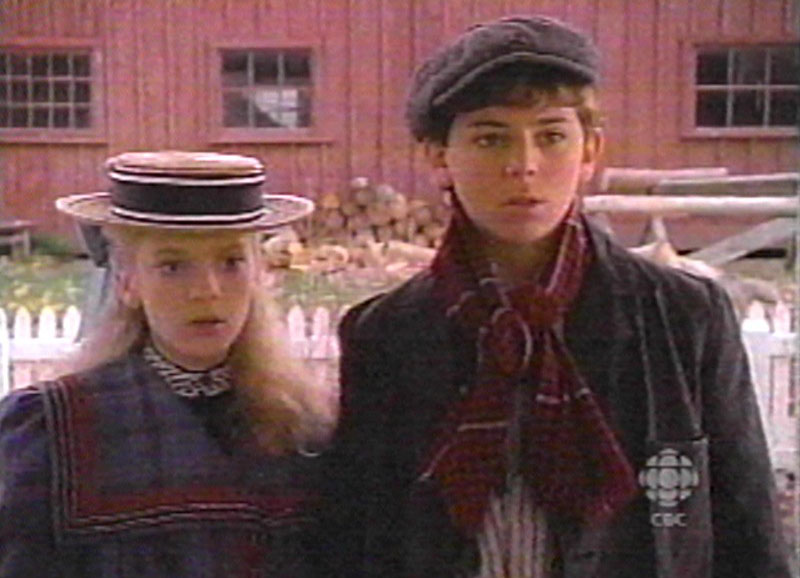 When they confront Margaret McCorkndale, it is Sara who mostly speaks and defends Maud Craig while Peter stands dumbfounded nearby like a broken character stripped of his own voice.  By this time, the boy can't even defend his poor mother!  This is sadly that last time we see Peter Craig in the series.

Unlike the series, Montgomery's Peter Craig stood up for himself and his friends.  After Felicity is mortified for accidently using tooth powder in the rusk for the Governor," Peter "manfully" defends his future beau.  “The rusks were splendid, anyhow, so what difference does it make what they were raised with?”  He scorns the Story Girl. 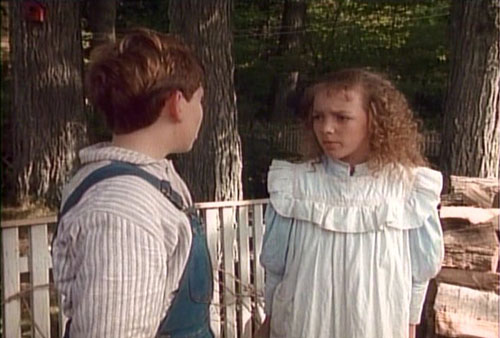 When the fearsome Peg Bowen tells Felicity that her complexion will be too red similar to her mothers, Peter retorts "Well, that’s better than being the colour of mud."  Throughout the books, Peter is defending his ladies honor.

By the second season and the realization that Road to Avonlea would continue as an ongoing series, it became apparant that a strong male protagonist in the spirit of Gilbert Blythe was missing. 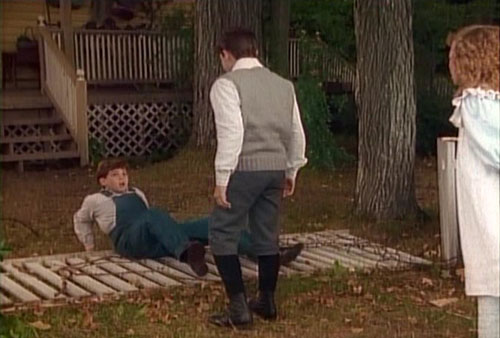 The producers seemed to realize the mistake they made with Peter and corrected it with the the emergence of Gus Pike.  Despite all the terrible things that happened to Gus, he never cried in the corner or shrunk from a challenge. Gus would also stand up to and for Felicity.

The writers accomplished with Gus what they failed miserably with Peter - creating a strong dynamic male protagonist to carry the main romantic arc of the series. 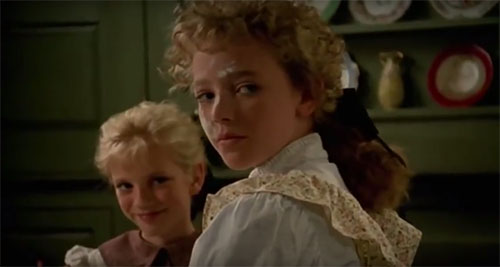 Montgomery's Peter Craig possesses many of the same traits that are later replicated with the emergence of Gus Pike: poor manners, a low social status, an outsider mystique, a drunken father, and a perchance to embarrass Felicity with scandalous behavior.

The Gus Pike character is now so firmly rooted in the hearts and minds of Avonlea viewers that it's hard to believe that his bare feet never stepped foot in Montgomery's King orchard and he never met Felicity, Sara or the other King children. 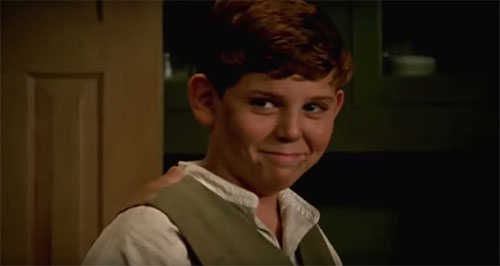 It's hard to acknowledge that Gus Pike simply didn't exist in the Story Girl's world.

It's unlikely the series will ever be rebooted.  As Montgomery critics have pointed out, the Story Girl never really had a story or plot--an unappealing quality to pitch to television producers and investors.  Sadly, Peter Craig will likely never become what Sara prophesized in these closing passages from 'The Golden Road':

“Peter will be a minister,” went on the Story Girl.

“Felicity,” resumed the Story Girl gravely, “will marry a minister.”

“She will be a perfect housekeeper and will teach a Sunday School class and be very happy all her life.”

“Will her husband be happy?” queried Dan solemnly.

“I guess he’ll be as happy as your wife,” retorted Felicity reddening.

“He’ll be the happiest man in the world,” declared Peter warmly.

So let's lift our glasses one last time and bid farewell to Peter Craig - The bold proud unsung hero  and shining knight of the Story Girl.