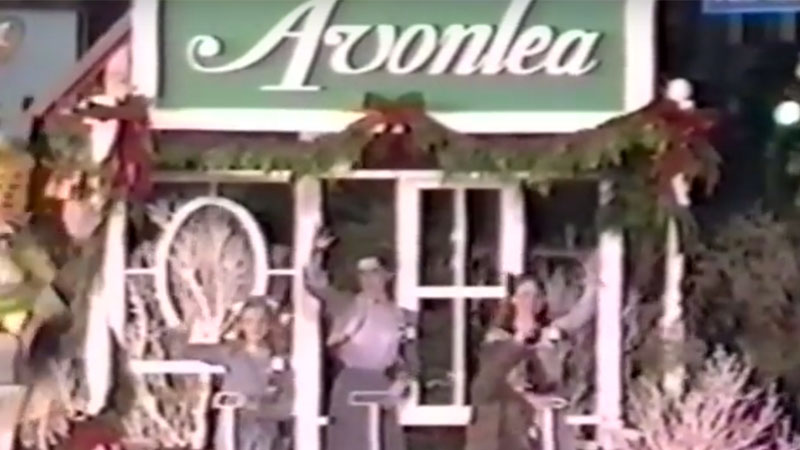 In December 1990, Avonlea had its own float in the Hollywood Christmas Parade. The series representatives sharing the float were Mag Ruffman, Zachary Bennett, Sarah Polley and Gema Zamprogna.

I first read about the parade in The Avonlea Traditions Chronicle and asked Mag about this event in March 2006:

Me: A few years back, you mentioned in an interview about participating in an Avonlea float with Sarah, Gema, and Zach in California. Do you remember when that was? Was it after the first season?

Mag: I think it was between the first and second seasons - it was The Hollywood Christmas parade. The parade announcer kept pronouncing the name of the show as "Eh-Von-Leah". And we all kept yelling back at them "AVONLEEEEEE!!!"1

Mag Ruffman looked back on how much fun the event was for the excited cast. She told the Chronicle:

"That trip was the most fun any four people could have under any circumstances. We got driven around prior to the parade in a giant stretch limousine; Zach thought he'd died and gone to heaven. He would roll back the sun roof and stand up in the opening, yelling and waving and carrying on. Gema and Sarah and I had to do our own hair for the parade.

We were staying on different floors of the hotel, so we were all running up and down, helping each other with our curlers, swapping hair spray, and screaming with laughter at how badly each of us were styling our own hair. Finally, we all just backcombed like crazy and Zach said we looked like hot stuff, so we left for the parade with Big Hair.

The reason we were having so much fun on the float was because we'd pass parade announcers who would tell the crowd we were the "folks from Avon-lee-yah" and we would all scream the correct pronunciation over and over 'till they got it right. Little upstart Canadians."2

Fortunately, Avonlea Rarities has preserved the brief event. The announcer is clearly reading the names as if he is unaware of the actors and even fumbles Gema's last name.

"We are of course looking at the Avonlea float," one announcer reports. "It is by the way the most popular prime time series in the Disney channel history."