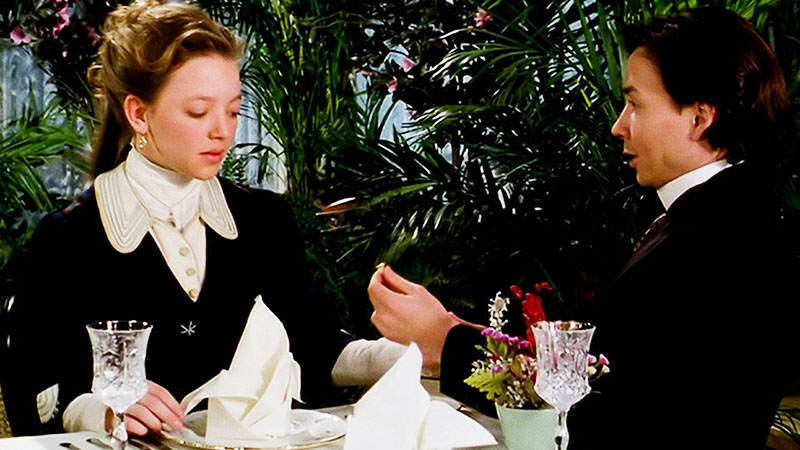 Gus proposes to Felicity and she must make a difficult choice between marriage and medical college.

Synopsis: Gus proposes to Felicity and she must make a difficult choice between marriage and medical college. Izzy arranges a romantic dinner between her unsuspecting father and Muriel Stacey.

The relationship between Gus and Felicity reaches a crucial turning point when Gus is promoted to assistant manager of the White Sands Hotel and Felicity is accepted to Dalhousie University.

Gus proposes to Felicity at the White Sands and an argument quickly erupts when Felicity mentions that she wants to go to medical college in Halifax, which would require her to put aside marriage to achieve her education goals.  Felicity becomes distraught when Gus tells her he won't wait for her to finish school and criticizes the role of women seeking higher education (which could be a retaliation to Felicity's scathing remarks toward Gus's status in 'High Society' and 'Felicity's Perfect Beau').

A fellow sailor convinces Gus to leave the hotel and work with him aboard his vessel. Felix joins them and gets drunk to the point of sickness from the sailor's brandy, which sets up a hilarious scene later when Alec calls for a toast and a hung-over Felix flees from the room.

In fear of losing Gus, Felicity decides to accept Gus's proposal and pursue teachers college in the Spring. Realizing that Felicity would be unhappy if she didn't pursue her career goals, Gus decides to leave on the vessel. Before Gus departs, he offers his ring to her again, but this time with "no strings attached."

In this episodes sub-plot, Izzy plays match-maker and attempts to find a wife for her father. Her first choice is Hetty, but Olivia discourages her, claiming that Clive and Hetty's relationship was purely professional (The romantic gesturing between Clive and Hetty was most likely dropped because of early plans for another King-Pettibone romance between Felix and Izzy).  Izzy then focuses her intentions on Muriel Stacey and together with the Keith twins, arranges a meeting between her unexpecting father and Muriel.

'Otherwise Engaged' provides a critical moment when Gus and Felicity go there separate ways, but keep a lasting promise of devotion to each other, expressed when Felicity keeps Gus's ring. We also see a much needed end to Gus's work at the hotel. When Gus was placed in the stuffy and snobby atmosphere of the White Sands, it only worked to strip away the excitement and mysterious nature of his character.

Although it was necessary for Gus to advance in life in order to provide for Felicity, his harboring at the hotel restricted the adventurous and free-spirited side of his personality. Another significant moment occurs when Gus reflects on his future with Hetty in the classroom. Hetty sits beside Gus in a schoolroom desk, which shows that they are no longer teacher and pupil, but at the same level.

Eliza tells Alec, Janet and Felicity that she lost her former beau, Rodney Binscott, when she told him to wait ten months for marriage. You might recall however, that Eliza remarked that her jilted beau was Lyle Prescott in 'Hearth and Home' and before this, her one true love was Timothy Cotton in 'How Kissing Was Discovered.'

The argument could be made that these inconsistancies are attributed to the possibility of Eliza being senile, but there seems to be little evidence to support this conclusion. Felicity's failure to acknowledge this error suggests that there is an inconsistancy among the writers.

Why did Izzy give up on wearing dresses already?

Wasn't it funny how Felix ran from the room when Alec called for a toast?

"I highly suggest the duck... Oh, but of course you could have the liver and onions. It's very good for you breath." -Felix King

"Father is going to kill me!" -Izzy Pettibone
"Well, it's been nice knowing you." -Davy Keith

"It was just ah means to an end... Ah thought workin' there would make Felicity proud of me." -Gus Pike (on why he was working at the hotel)

Gus tells Felicity that he has "travelled near half way around the world... Never saw ah sight as lovely as the one I'm looking at right here." Izzy gets sappy when she tells Olivia about "counting the stars" while planning to arrange a romantic relationship for her father. Gus gives Felicity his ring and tells her "whenever your lonely or discouraged, look at it and remember... I love you Felicitay. I always will."

(1) This is the first episode where Micheal Mahonen is featured as a special guest star. Gus only appears for one episode in the next season, the season opener, 'The Return of Gus Pike'. Mahonen left the series to live in Los Angeles and returned periodically. In an interview for the winter 95/96 edition of the Avonlea Traditions Chronicle, Mahonen remarked that it was best that the character only returned for occasional episodes.

"I think that's ideal because there is a mystery about Gus Pike that needs to be maintained for the integrity of the character... I'd also like to be free to do other projects in theatre, film and television."

(2) Felicity is to leave for medical school in four weeks.

Gus Pike leaves Avonlea, but his story isn't over. As he tells Felicity, "ya haven't seen the last of me, Felicitay King."