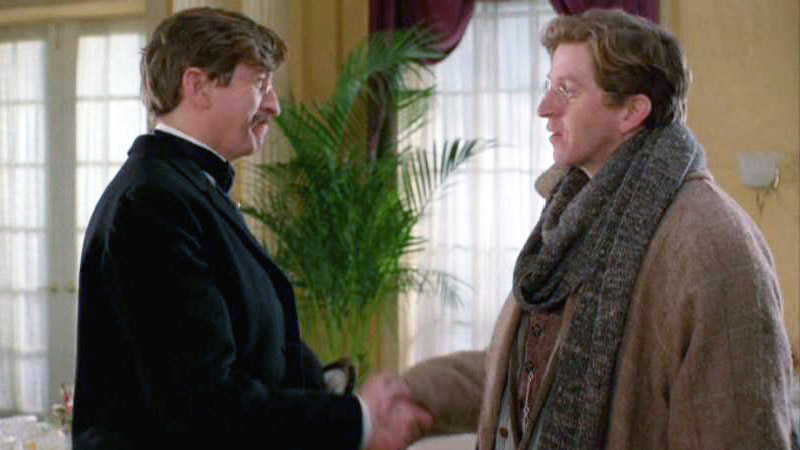 Synopsis: Jasper invents a new material and Olivia convinces him to patent the formula. She seeks out Jasper's cousin, businessman Jeremiah Dale, who arranges investments to mass produce the material. When Jasper and Olivia discover that Jeremiah is a fraud, the wicked cousin attempts to leave town with the investments and the formula.

"But they're cousins... Identicle cousins and you'll find. They laugh alike, they walk alike at times they even..." Oh wait, this isn't the Patty Duke Show! It's kind of similiar though.

The Patty Duke Show featured two cousins, Patty and Cathy, who looked identicle. It was really just Patty Duke playing both parts, similiar to R.H. Thomson playing both Jasper and Jeremiah. Except in the Dale cousins case, one of them is evil (although if you don't like the Patty Duke show, you probably think both Duke cousins are evil).  It's just like having an annoying wicked twin around.

Speaking of troublesome twins, Davey is told by Hetty that he must perform at least three good deeds after breaking one of her vases. He decides to help Jasper with his new invention and accidently alters the chemical combination of the experiment. Consequently, a new material is discovered that can be used for various items such as kitchen appliances.

Jasper is encouraged by Olivia to patent his invention and Olivia seeks out his cousin, businessman Jeremiah Dale to assist them. Jeremiah collects money from the town to invest in the new product and calls the material 'Jasperon.'

The evil cousin however, has plans to steal Jasper's invention and rob the town quicker than you can say 'stolen school library funds.' Jeremiah's ploy is discovered and he attempts to escape the town with the money and Jasper's formula.

The classic switcheroo occurs when Jeremiah shaves his mustache and pretends to be Jasper. Jeremiah escapes town with the formula, but Davey accidently confuses the luggage and keeps the bag with the towns money.

When Jeremiah attempts to patent the material as 'Jeremian,' he learns that the material had already been discovered and was called 'plastic.' He should have just slightly changed the formula and called it, 'I can't believe this isn't plastic!'

Up until this episode, the town has largely considered Jasper to be incompetent. It seems unrealistic that the villagers would invest in his invention.

They finally found a more incompetent Constable to replace Abner Jefferies. After Jeremiah escapes through the White Sands kitchen door, the Constable follows him outside.  After three seconds, the Constable returns and says that there is no trace of him. How does he know? He only looked for three seconds! Even Abner wouldn't have been that stupid.

They could have given Jasper a little more offense in his struggle with Jeremiah. He could have at least been able to fight off that dreaded bed sheet Jeremiah threw at him.

Isn't there something wrong with a family tree when you have two cousins who look exactly alike?

How come everyone who stays in room 12 of the White Sands Hotel is either a corrupt businessman or a dirty politician?

Archie says that Jasper's house is passed the bridge and one fourth of a mile down the road on your right. Isn't that the location of King Farm?

"Three good deeds. This should keep him out of trouble." -Hetty King

"I didn't know you could make money by being good." -Davey Keith

"Where Cathy adores a minuet, The Ballet Russes, and crepe suzette, Our Patty loves to rock and roll, A hot dog makes her lose control -- What a wild duet!" -The Patty Duke Show singers

Olivia swoons and says, "Oh, I'd know Jasper anywhere," followed by a kiss. Jasper tells Olivia, "I am rich. I have you."