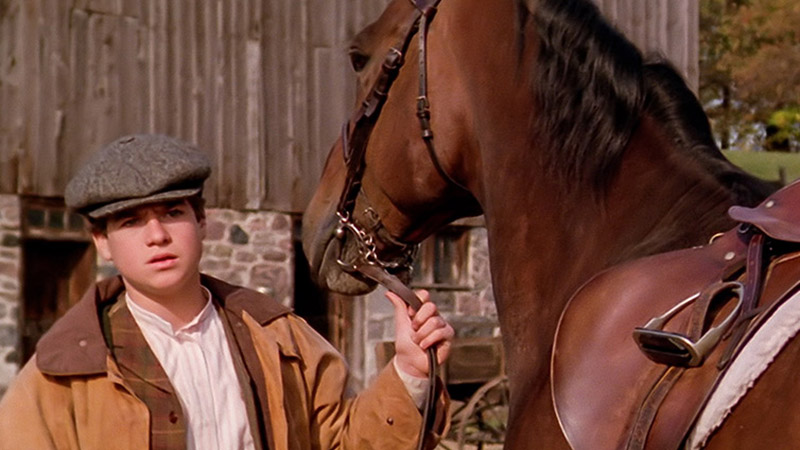 Felix enters a steeple race during the harvest fair, which causes much concern for Janet.

Synopsis: Felix enters a steeple race during the harvest fair, which causes much concern for Janet. Alec supports Felix in the race against his rival, Clive Pettibone, and the two men make a wager. After falling from his horse, Felix becomes fearful of riding, which also causes Janet to remember a frightening childhood memory.

Janet forbids Felix to race with Prince for the harvest fair, but Felix is determined to enter the competition. Alec also disagrees with Felix at first, but Simon Tremayne helps convince him that Felix is old enough to compete.

Clive Pettibone enters the race but Arthur is quick to criticize his father, claiming that he's too old to compete.  In an interesting conversation with Izzy, Arthur says that "if you love something that much, giving it up would be a kind of death." Arthur is most likely eluding to giving up his hopes for a relationship with Felicilty after she rejected him in'Felicity's Perfect beau.'

Alec makes a bet with Clive that Felix will win the race, but Clive is confident that he will win with his horse Annabell (I'm sure Alec still resents the bitter sting of losing his position as Avonlea Volunteer fire chief to Clive Pettibone in 'Boys Will Be Boys', and sees this as an opportunity to extract some type of revenge).

Alec and Felix sneak out of the house to practice racing, and it's funny to note that their practice ground could clearly be seen from the King Farm kitchen and backyard (but somehow, Janet never sees this).

Alec convinces Janet to change her mind, insisting that risks are necessary in life. Felix confronts his fears and enters the race, tying Clive Pettibone at the finish line. Afterwards, Felix and Alec encourage Janet to ride again.

It was obvious that Felix and Prince passed the finish line first. I guess that kind of scene where the race would have to be a photo finish could have taken hundreds of takes to get right.

Doesn't Simon look like the old guy in the Monopoly game with that top hat?

Doesn't the announcer at the harvest race sound like a cartoon villain?

"He's trained enough to give you a good view of his backside when he crosses the finish line." -Alec King (supporting Felix in front of his rival, Clive Pettibone)

"Life is full of risks, you can't avoid them." -Alec King

(1) The current episode was featured on video with the third season episode Felix and Blackie. The video was entitled 'Lessons for Felix.'

(2) A sign advertising the cross country steeple chase for the Harvest Fair stated that the race takes place on October 4th (1908) at 2pm. The grand prize was ten dollars.

Felix should have won.  The double finish was a cop out.