Episode 1.13: Nothing Endures But Change 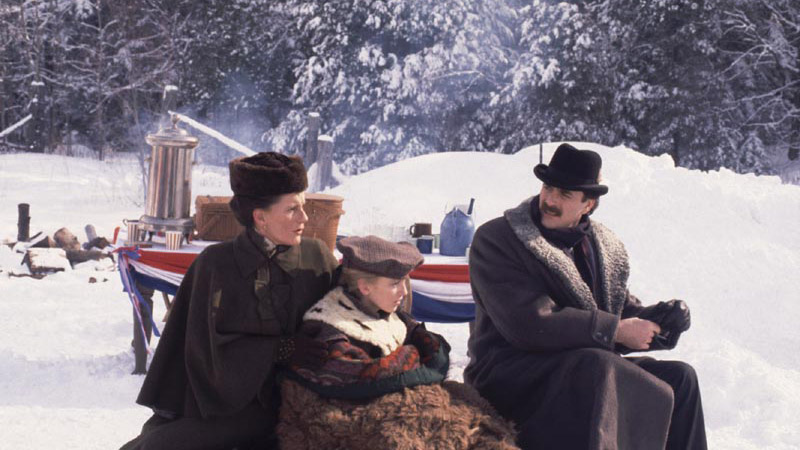 Sara's father is acquitted of embezzlement charges and plans to take Sara home to Montreal. Hetty renews a fierce conflict with Blair Stanley in order to keep Sara in Avonlea.

Similar to the title, the theme concerns change and how families must come to terms with their problems if they are to survive. Hetty blames Blair for Ruth's death and a bitter conflict ensues over Sara's guardianship. Only Sara's resistance causes Hetty and Blair to resolve their conflict.

In another example of the impossible Rose Cottage floor map, Hetty looks outside Sara's window and sees Blair Stanley standing in front of Rose Cottage (the non-arch side). This is impossible, since Sara's room does not face in that direction and is obscured by trees. Sara's 'frog splash' face first fall from the barn looked a bit comical, which wasn't intended.

"Blair Stanley, like it or not, we are bound together by those we love." -Hetty King

(1) This episode is based on 'The Story Girl Goes,' the last chapter of Montgomery's The Golden Road. Contrary to the series, Sara Stanley departs King Farm with her father, thus ending the story girl saga. The reason why this final chapter occurs so early in the series is because the producers did not expect the series to last for more than one or two seasons.

"Blair Stanley dwells excessively on the forest's 'wild heart beating against ours' and on disturbing "the rest of a white, wet naiad" who lives in a woodland spring. Such fanciful talk is amusing when it comes from 11-year-old Anne, but the lengthy imaginative flights of a middle-aged man are tiresome."

(3) In Montgomery's 'The Redemption of John Churchill (see notes from 'The Journey Begins'), Churchill is released from prison after serving a sentence for embezzlement and seeks to reunite with his son Joey, who stayed with an aunt while his father was in jail. Similar to Hetty's disdain for Blair's arrival to fetch Sara, the Aunt is strongly against Joey reuniting with his father.

The first season comes full circle with this episode and neatly ties in with 'The Journey Begins.' Fortunately, Sara's journey continues in Avonlea.