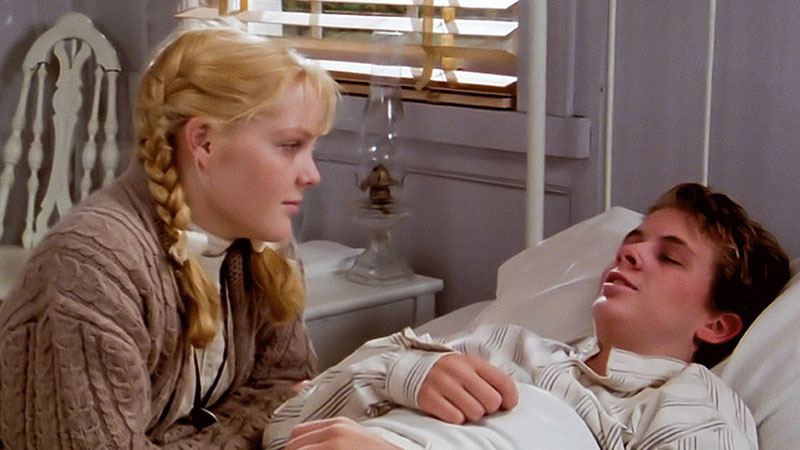 When a troubled and sickly ruffian gets sick, Cecily stages a summer Christmas party to lift his spirits.

Janet visits Cecily in Thornhill sanitarium and becomes concerned about whether her daughter can recover from the life threatening tuberculosis that she contracted in Thursdays Child.  A drastic change is presented in Cecily's behavioral and physical (see criticism) characteristics. The sweet wistful Cecily, played by Harmony Cramp, is replaced with a feisty and rebellious Cecily, played by Molly Atkinson.

Cecily befriends a 14 year old ruffian named Louie, who also suffers from tuberculosis and has a grim outlook on the possibility of his recovery. Despite claims that Louie is a "charity case" sponsored for treatment by a New York newsboy union, Louie insists that he comes from wealthy parents and has travelled the world.  Louie cements his stereotypical tough Brooklyn character with phrases like "you want a knuckle sandwich?" and "the name's Louie toots." Mischief and pranks ensue as Louie entices Cecily into several misadventures, which consequently gets Cecily in hot water.

The head administrator writes a letter to inform Alec and Janet of Cecily's behavior. When Louie discovers the letter, he lights it on fire, which accidentally starts a raging fire at the sanitarium. Louie, on his last leg, admits that he is not wealthy and the newspaper company sponsored his treatment at Thornhill.

In response to this tragic news, Cecily stages a summer Christmas party for Louie. A short while later, she learns that Louie died.  Cecily bids farewell to her departing parents and makes a promise that she will return to Avonlea.

Perhaps it's only appropriate that a place where death occurs frequently would be the location where Harmony's sweet natured Cecily would be replaced by Molly's more upbeat and energetic Cecily. With many of the critical cast members leaving for other projects, producers believed it was important to make Cecily's character more dynamic, which explains this drastic shift in her character traits.

Molly Atkinson has a greater acting range and brings a spunky and rebellious side to Cecily's character, but Harmony's sweet Cecily is sorely missed.

The first order of criticism concerns Molly Atkinson's unpopular replacement of Harmony Cramp as Cecily King. Molly's physical appearance is not consistent with Cecily's age or physical appearance. There is no clear or reasonable explanation how a sickly Cecily could have become so robust while suffering from tuberculosis.  The symptoms of tuberculosis include a loss of appetite and weight loss, which makes Cecily's sudden growth spurt quite a stretch for the imagination.

Louie, on the other hand, is too small for his role. Louie is supposed to appear like a tough kid, but the fact that he is dwarfed by Cecily, makes his appearance wimpy and laughable.  Louie is about as intimidating as Eddie Munster and the only person he can believably push around is the profoundly prissy 'rich kid #1.'  Louie could have at least been given a last name to help avoid being perceived as a flat and stereotypical character.

The Christmas party is rushed and problematic. The most obvious problem is that by celebrating a Christmas Party in June, it dispels any hope that Louie will survive until December. This lack of faith in Louie's recovery creates a somber atmosphere that conflicts with the cheerful intention of the celebration.

Alec gives a very unenthusiastic Santa performance that would make even the most disgruntled mall Santa cringe. Cedric Smith's lack of enthusiasm suggests a desperation to get out of the suit and the scene.

Isn't Cecily too old to be wearing braids?

Wouldn't it have been funny if Alec and Janet demanded to see their real daughter and claim that the current Cecily was a fraud?

Was that a corset or a football that Cecily was wearing?

"Tell all my family and all my friends that I'm going to be home within the year. I made a promise." -Cecily King

(2) Shane Meier, who plays Louie, briefly appeared in the movie 'Unforgiven (1992)' as Clint Eastwoods character's son, Will Munny. Jaimz Woolvett, who played Booth Elliot in Enter Prince Charming, also appeared in the western thriller as the The 'Schofield Kid.'

This episode should win an award for being unintentionally funny.