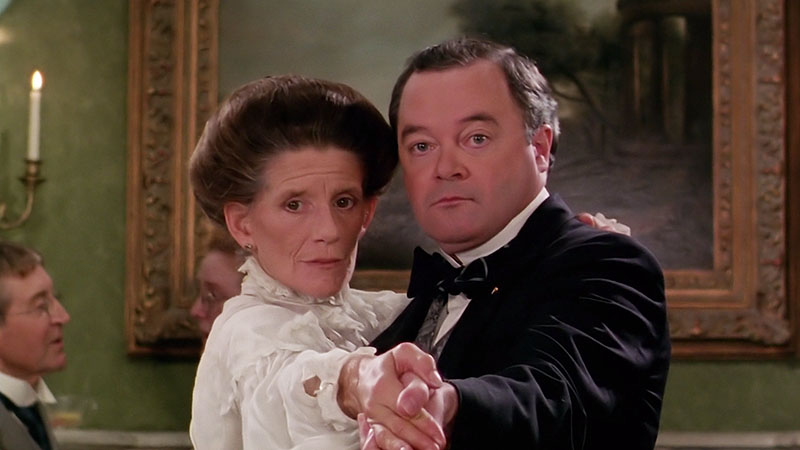 The bachelor auction allows great interaction between all the characters: Pierre LaPierre's hilarious romancing of Rachel Lynde; The early budding romance between Felix and Izzy, hindered only by Janet King's overprotectiveness and the antagonizing Velma bugle; the comedy of Emma Bradley and Laura McDonald's infatuation with self-proclaimed 'ladies man,' Nat Lester; the bittersweet struggle for Becky Lester to raise a few cents to bid on Davy; Muriel's decision to avoid spinsterhood and attempt romance; Hetty's realization that Clive is interested in Muriel; and of course, Simon Tremayne's predicament.

After a misunderstanding, Alec informs Simon that Hetty will bid on him. Hetty however, has plans to bid on Clive Pettibone.  Who doesn't feel sorry for Simon when he realizes that Hetty was bidding for Clive Pettibone and that he would be the odd man out?

While Muriel expresses her feelings about love vocally with Hetty, both Felix and later a reluctant Simon, assisted by Alec, use flour to reveal their love interests.  Felix unconsciously spells Izzy's name in the flour. Later, Alec hints that Hetty will bid on Simon and spells the first letter of her initials in the flour. Simon is stunned and completes the 'K' in Hetty's initials. Much to Simon's eventual dismay, Hetty believes that Clive is interested in her.

In a funny scene, Hetty accepts a bottle of back medicine from Clive and interprets it as a fond romantic gift. At the auction, both Hetty and Muriel make a bid for Clive which creates an awkward moment. Not only does Hetty realize that her friend and former rival, Muriel Stacey was interested in Clive, but Simon learns that Hetty was not interested in bidding on him after all.

Perhaps the best moment however, occurs after Janet makes an unsuspecting bid for Felix and consequently outbids Izzy. Later that night, while Felix was reluctantly entertaining his mother, Izzy suddenly arrives at the King residence. Felix is astounded and pleasantly surprised to find that Izzy has been invited to dinner.

'Lonely Hearts' is a well crafted episode that features an ensemble cast. The fact that Gus, Felicity and Sara are not in this episode, shows that 'Road to Avonlea' is not just about any one big star or moment, but about the strength of all the characters in the town itself.

In the episode, A Friend in Need, ironically also written by Marlene Matthews, we find that Izzy didn't wear dresses when she was younger. Before the auction, Izzy supplies Becky with a dress, that she claims she outgrew.

Isn't it funny how Hetty keeps the back medicine like it's a fond item?

"I would rather put my head in a noose than have some lady bid on me as if I was a prized pig in the county fair." -Simon Tremayne

"The only thing sillier than a girl making goo goo eyes at a young boy is some old bat making a fool out of herself for some old geezer." -Rachel Lynde

(2) Rachel Lynde is not featured as a special guest star in this episode.

(3) Davy and Dora are ten years old. When her brother is entered into the auction, Dora comments, "how can a ten year old be a bachelor?" This doesn't stop her from bidding on the equally young Wiley Lester.

If an episode can make you feel something for Simon Tremayne, then it deserves the highest mark.