Episode 3.7: A Dark and Stormy Night 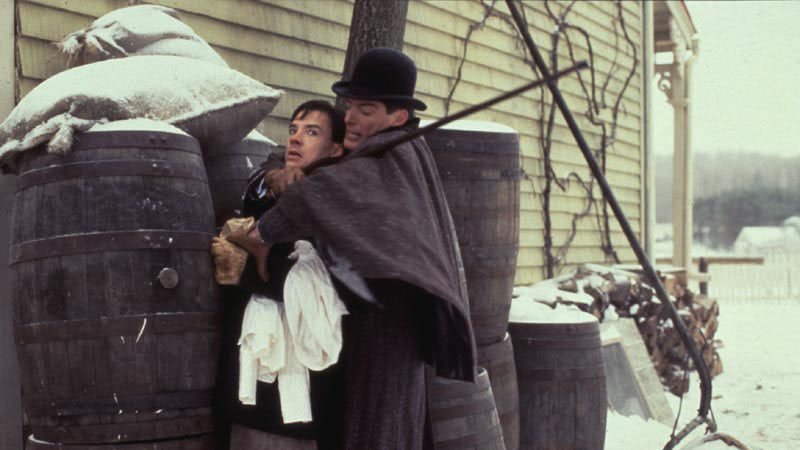 Gus encounters the mysterious Amanda Stone and is caught in a game of cat and mouse with her pursuer, the villainous Robert Rutherford.

Felicity becomes jealous when Amanda Stone kisses Gus in gratitude for his courageous stand against Rutherford, which continues to tease the pending Gus and Felicity relationship.  Gus discovers that Amanda planted precious gems in his possession to hide them from Rutherford.

Hetty helps Gus get a job at the White Sands, where he is instructed by Percy Methley (who might either be the proprietor or the bellhop). At any rate, it appears that Methley is working both the day and night shift.

It's eventually realized that Amanda Stone is a jewel thief and a former accomplice with Rutherford, which might be expected from her terrible acting routine. After using Gus as a pawn in their bizarre game, the couple is reunited.

Stone and Rutherford leave Avonlea in pursuit of the gems that were being held in a safe in the Carmody Constable's office; but for some obnoxious reason, they return the next night.

As the Montgomery influences disappear, we begin to see "cliche" episode titles like the current episode title.

More examples of Hetty's dramatic transformation emerges as she is caught reading the suspense thriller, "Death Rides by Night." The Hetty from the first season wouldn't have been caught dead reading such a story.

After Sara reads part of the same story, Felix comments that "all this because some girl won't pledge her troth, whatever that is." Felix knew very well what this meant. Recall that in 'May the Best Man Win,' Felix was upset that he was betrothed to both Olivia and Sara.

Gus Pike continues to lose his mysterious and adventurous edge when he's presented as a bumbling hotel waitor and is simply used as a naive pawn between Amanda Stone and Rutherford (see notes). This is just another example of how the American guest stars eclipsed the importance of the Avonlea characters.

It's anyone's guess how Digger was alerted to Rutherford's activity at the lighthouse, which is a considerable distance from King Farm (Digger must have staked out half of Avonlea as his territory). Either Digger was innately aware that Rutherford was a menace or Rutherford was carrying a considerably large dog biscuit in his coat.

The ending was awful and unbelievable.

Yes, the night was dark... But why wasn't it stormy?

Why was Felix in jail with Gus?

Did Digger eat the real script to this episode?

"That tramp! Taking advantage of poor Gus like that. ...I'm going to follow that hussy and demand that she leave Gus alone." -Felicity King

(1) In an interview for the Avonlea Traditions Chronicle, Michael Mahonen expressed his disapproval of the way Gus Pike's character was handled.

"I felt that Gus Pike had started out as such a wonderful free spirit," he commented. "He smoked a pipe, played a fiddle, was very genuine, very earnest, and a little mysterious. Then in the next season (season three), for some reason, he was put into a tuxedo in a hotel restaurant as a bus-boy... In one episode in particular, Gus was written as a total fumbling idiot who couldn't understand even the most basic of ideas or concepts, which is untrue."

If I had to stake a bet, I would bet that Mahonen is referring to this episode.

(2) According to the Toronto Star, Christopher Reeve accepted the role of Robert Rutherford without reading the script:

"They called up and asked did I want to do it and I said I'd be happy to. I'm sure it'll be fine. I'd seen Anne Of Green Gables and was close to Colleen Dewhurst, and she'd spoken highly of Avonlea. Colleen was president of Actor's Equity and I was on the council and we did several programs at Williamstown in Massachusetts."

(3) John Neville, who played Percy Methley, played the lead in The Adventures of Baron Munchausen (1988), which also featured Sarah Polley. Neville also played 'Uncle Malcolm' in 'Emily of New Moon' and Professor Billby in By Way of the Stars (1992).It's a wonder why he is playing such a small role in this episode. It's probably because he has to step aside for Disney's demand for American actors.

(4) Christopher Reeve of Superman fame, otherwise known as Robert Rutherford, played in a mystery-thriller style movie called 'Deathtrap (1982),' which was similiar in it's 'who-dunnit' style to this episode and equally as forgetable. Reeve was paralyzed when he was thrown from a horse in 1995. The horse from which he was thrown was ironically named Buck.  Reeve passed away in 2004 at age 52.

There were just too many problems with this episode, but Felix's line in jail saved it from a lower grade.