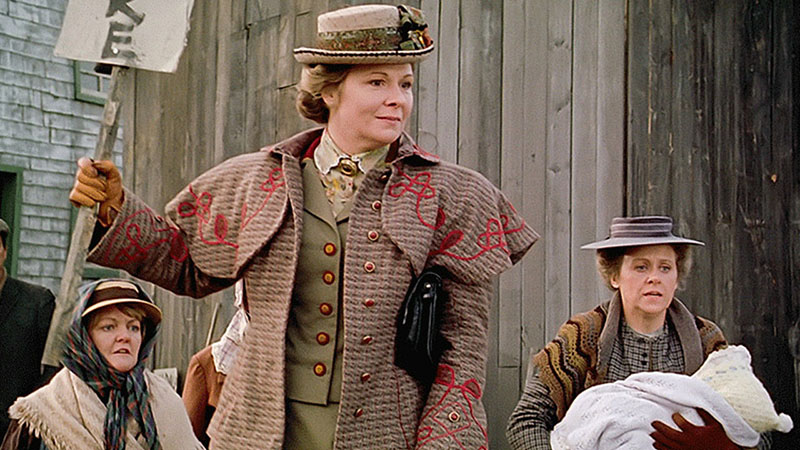 Janet joins the suffragette movement and campaigns for equal wages for the cannery workers. Her struggle and absence from King farm puts tremendous stress on her family and marriage.

Janet is inspired to support the suffragette movement after attending a lecture by the ever popular guest speaker, Amelia Sandhurst (who we never hear of again).

Peter Craig suddenly materializes after being non-existent since the previous season (did he get stuck in the attic?) and is visited by his mother Maude, who has accepted work at the cannery. Hetty calls Peter the best hired hand that King farm has ever had, next to old Jake. This isn't such a great compliment considering that old Jake and Peter were probably King farms only two hired hands.

Angus McCorkndale, The tyranical owner of the cannery, opposes the movement and imposes slave wages upon his workers. Angered by McCorkndale's deplorible working conditions, Janet leads the cause for women's rights and better wages for the cannery workers.

Janet's cause puts tremendous strain on her family and Alec must balance farm work with child care. When a conflict erupts between them, Janet reluctantly flees to Rose Cottage to seek unlikely solace from her unbending and unsympathetic sister-in-law, Hetty King.

Felix accidently dyes all the clothes red while attempting to do laundry. This sets up a hilarious scene where Felicity chases her trouble making brother from the room.

Maude Craig is fired from the cannery by McCorkndale when she signs Janet's petition. In retaliation, Janet joins a strike but is consequently arrested.

Peter maintains his wimpy characteristics that were clearly evident in 'Conversions' when he is unable to stand up against anyone or for anything. Not surprisingly, it is Sara who encourages Peter to visit Margaret McCorkndale to convince her to take action against her husband's unfairness.

When Margaret McCorkndale learns that the cannery is losing money, she forces her husband to accept Janet King's terms and provide better wages for the workers. The irony is that Angus, who was defiant against womens rights, is ultimately controlled by his wife.

This scene is similiar to Olivia's swaying of Mrs. Hardy to take action against her husband in 'Old Quarrels, Old Love.'  Janet is released from prison and reconciles with Alec.

Those poor Craigs.  Whenever the writers need someone to bare the brunt of a problem, they drag Peter and his mother in for a whipping.

This was really a bad way to phase Peter out of the series. At least Andrew King actually left town with his father and was given a reasonable explanations for his exit from the series (despite his brief unexplained reappearance). Peter apparently stays in town and everyone just ignores him.

Isn't it funny how you can always hear Clara Potts's laughter in a crowd?

Isn't it ironic to hear Hetty's lack of hospitality when she tells Janet that Rose Cottage "isn't a hotel," considering that Hetty becomes the co-proprietor of the White Sands hotel in the next season?

If the cannery workers get what they want, then how come we never hear about Peter and his mother again in the series? Do they just drop off the cannery dock after this episode or does the King family just ignore them for the rest of the series?

"The cannery treats women terribly. Now if women had the vote we could change all that." -Sara Stanley

Pillow talk between Alec and Janet. Janet asks Alec what he sees when he looks at her and Alec says he "sees the woman he loves."

(1) Miklos Perlus, who played Peter Craig, would be phased out of the series in this episode. With Gus Pike replacing Peter as a dynamic love interest for Felicity, there really isn't much use for Peter's character in the series. The series writers not only failed to create Peter as a dynamic character, but also provided no explanation for his abrupt disappearance.

(2) Miklos Perlus played Jay Osmond in the 2001 television movie, Inside the Osmonds. In a review for the movie, it was pointed out that the Osmonds downfall was due to "manipulation" from "television executives." Does this sound familiar?

(3) In Chapter XXXI of The Golden Road, titled 'The Last Number of Our Magazine,' it is mentioned that Peter will go to school in Markdale in the winter.

(4) This will also mark the last appearance of Abner Jeffries in the series and there is no explanation for his future absence. Abner is still the Constable at this point, which makes it questionable why he didn't question Felix about skipping school in 'Felix and Blackie.'