Episode 3.10: After the Honeymoon 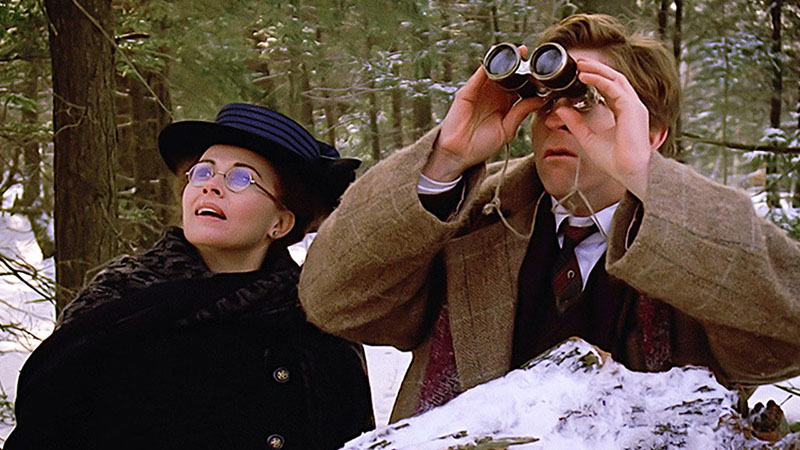 The town begins to gossip about Jasper and his fellow researcher Sydney Carver as they begin to spend time together studying bats.

Felix thinks that Jasper is a vampire after reading 'Dracula,' noticing several marks on Jasper's neck, and learning about the inventor's preoccupation with studying bats.  There seems to be some innuendo when Sara questions Felix about whether he has hairy palms and later when Sydney offers 'warm buns' to Jasper.

Despite her fear of bats, Olivia ventures to the cave where she helps rescue Felix and Sara. Sydney hits on Jasper and he rejects her advances, telling her that he is a happily married man. Olivia is overjoyed to hear their conversation and puts her thoughts of jealousy to rest.

There were a lot of rough transitions between scenes. The scene where Hetty finds Felix with the onion necklace seemed to be left unfinished.

In another scene, it looks like the camera freezes after Jasper pulls his clothes inside his closet using his clothesline invention. There also appears to be a lot of incoherent mumbling in this episode, which could be attributed to the sound editing.

What's the purpose of a ringing tea kettle? Don't tea kettles already make a loud noise when the water gets hot?

Why does Hetty keep a science book in the Rose Cottage kitchen?

Did Felix really have hairy palms?

Jasper tells Olivia that she's the one that he loves and Olivia replies by exclaiming, "I love you too Jasper!"

(1) Canadian born Kate Nelligan, who played Dr. Sydney Carver, has been acclaimed for her various stage and television roles, and even earned an Oscar nomination for her role in 'The Prince of Tides' (1991). Nelligan won a Gemini Award for 'Best Guest Performance in a Series' and an Emmy nomination for 'Outstanding Lead Actress in a Dramatic Series' for her portrayal as Dr. Sydney Carver. Interestingly, Nelligan also appeared in the 1979 movie 'Dracula.'

(2) Nelligan told the Toronto Star that her appearance in this episode was a reunion with R.H. Thomson.  "He'll kill me for this," she confides. "When I was 17 or 18, Rob was my boyfriend, and I haven't seen him since. I've seen some his work - (the miniseries) Glory Enough For All - but the last time we were together we were doing some play in Middle-English, at university, I think. Something no one but the actors could possibly understand."  This relationship is interesting, considering that Olivia suspects an affair between Jasper and Sydney.

(3) Kate Nelligan was pregnant during the filming.  According to the Toronto Star: "She is in full make-up, her classic features lampooned by a large, black Victorian bonnet, her three-month pregnancy concealed, more or less, by a three-quarter-length black velvet coat and a thick cardigan."  The temperature outside her trailer was a bitter 15 degrees celsius and her furnace only blew a frigid air blast.

This episode is not that memorable, probably due to quite a few boring moments.