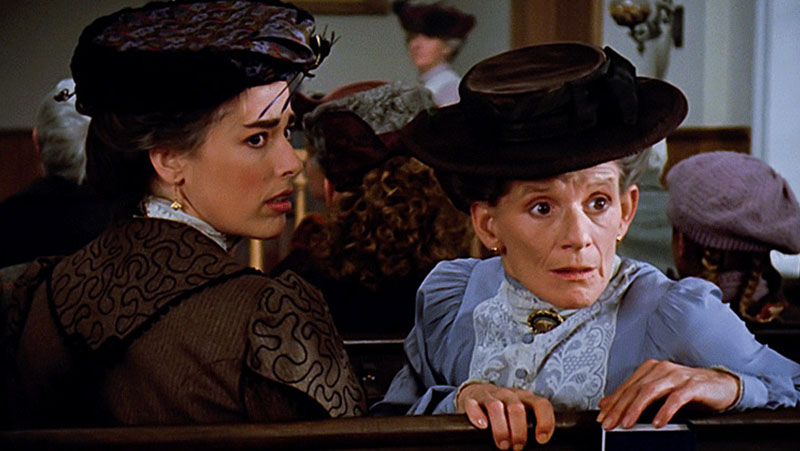 Felicity takes Janet's comb without permission to wear for a social colloquiam, but loses the family antique after an altercation with Felix. Janet believes that she has lost the comb and must endure pressure to wear the heirloom from Hetty, Olivia and Alec.

A new reverand begins his services in Avonlea and his boisterous and cryptic sermons cause a stir.  Felicity takes Janet's comb without permission to wear for a social colloquiam, but loses the family antique after an altercation with Felix.

It's funny how Alec, Hetty and Janet insisted that Janet wear the comb, but would change their minds when they realized how terrible it looked. Janet believes that she has lost the comb and must endure pressure to wear the heirloom from Hetty, Olivia and Alec.

The sibling fued between Felicity and Felix is reignited in this episode. It's hilarious how Felicity loses her temper with Felix and threatens his life with a pitchfork. When Felicity chases Felix into the barn, it's reminiscent of how Felicity chased Felix in How Kissing Was Discovered.

As a lunar eclipse approaches, Felicity believes that the world is about to end and is encouraged to confess past wrongs.  Cecily eventually admits that Digger buried the comb, which causes Felicity to ironically reply by saying, "Oh this is a terrible thing you have done Cecily. I'd hate to see what will happen during your judgement day."

The theme for 'Vows of Silence' deals with the pressure of moral obligations to tell the truth and the possible consequences and perhaps benefits that could result by keeping the truth silent. It's clever the way the ending showed that the truth had been revealed when Alec observed Digger digging up the comb. It's refreshing to have a simple and humerous ending rather than an ending with a typical moral message concerning truthfulness.

'Vows of Silence' marks a point of departure in the lives of Felicity, Felix and Sara, who are about to leave the 'golden road' behind and embark into adulthood. This departure is most apparent in an awkward scene where the King cousins are visiting Peg Bowen.  Their belief in the witch is no longer convincing as it was in the first few seasons (see criticism).

Their childhood adventures would soon be replaced by adult responsibilities, including Felicity's pursuit of a higher education, Felix beginning work at the White Sands hotel and Sara's interest in her future.

Felicity, Sara and Felix have clearly outgrown the influences of Peg Bowen and their belief in her magic isn't believeable anymore. This could explain why we don't see Peg again in the series. Peg always played a mythical and omnipotent character who seemed to know everything that transpired in the town.

As the children are now growing up and taking on adult responsibilites, there isn't a need anymore for a witch of Avonlea. If Peg's one dimensional character was able to develop depth and a human side (and perhaps insight into her background), then she might have had a future in the series.

What happened to Reverand Leonard? Did he get busted for the gambling bid he made for the church roof?

Did you notice how Alec and Janet were keeping Aunt Arabella's blue chest at the foot of their bed? Could a chest symbolic of tragedy have been a playful clue from the director of the alleged end times?

"Close your mouths. You look like a bunch of ignorant country girls." -Felicity King (addressing the Young woman's Colloquiam for Social Betterment)

"Currenly, the loss of the comb is the only black mark on the ledger of my soul, easily outweighted by all my good deeds." -Felicity King

"We've turned the balance of evil! You still have me to deal with however." -Felicity King (to Felix)

(1) This episode was derived from Chapter 19 of Montgomery's Story Girl, titled 'A Dread Prophecy.'  Felix is terrified to read that the world will end in the Charlottetown Daily Enterprise.  “It’s there,” he gasped. “Look—read—oh, do you—think it’s—true? The—end of—the world—is coming to-morrow—at two—o’clock—in the afternoon!”

(2) The Disney title for this episode was inappropriately called 'True Confessions.' This title falls short considering that Felicity and Janet never confessed the loss of the comb to Alec, Hetty or Olivia. Instead, the episode ends with Janet insisting that she and Felicity maintain their secrecy over the combs disappearance. 'Vows of Silence' was clearly the appropriate title.

(3) An eclipse would occur again in the seventh seasons' episode 'Total Eclipse'.

(4) This is the last episode to feature Peg Bowen. Susan Cox, who played Peg, was in a movie released in 1992 called California Hot Wax, or Bikini Carwash as it was billed in the US. The character Susan played was called 'Peaches.' I'm not making this up!

This is a very underrated episode. Despite the cryptic content, 'Vows of Silence' is hilarious from beginning to end!