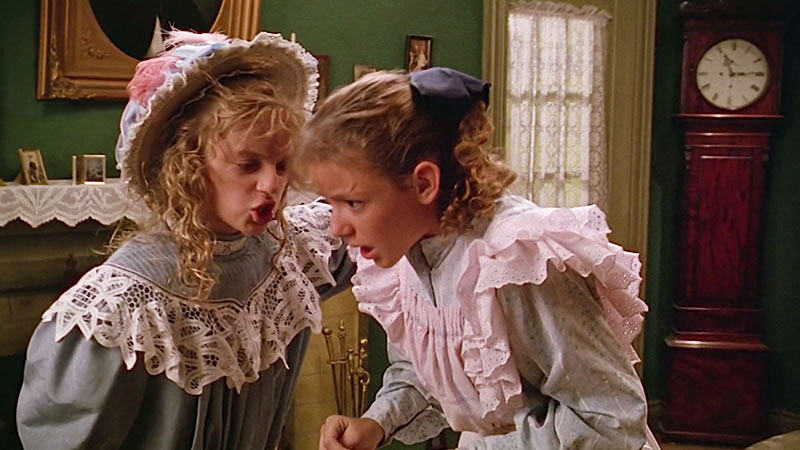 Sara befriends a petty thief named Jo Pitts, who looks exactly like her. When Hetty's disciplinarian nature becomes too much for Sara to tolerate, she switches places with Jo.

It's surprising that the Disney Channel didn't rename this episode 'The Parent Trap with a Twist.'

A conflict between Hetty and Sara begins when Sara attempts to purchase a dress, only to meet Hetty's strict disapproval. Felicity continues to follow in Hetty's disciplinarian footsteps when she informs Sara on the proper methods of housekeeping.

Sara befriends a petty thief named Jo Pitts, who looks exactly like her. When Hetty's disciplinarian nature becomes too much for Sara to tolerate, she switches places with Jo.  The street waif begins to case Rose Cottage and terrorizes Hetty, Felix and Felicity.

Gus Pike receives an urgent message that Captain Crane needs his help and departs for the mainland with Sara, who is willing to go anywhere to get away from Hetty.

Surprisingly, Gus and Sara encounter the treacherous Abe Pike when they reach the main land.

Isn't it great when Jo Pitts terrorizes Felicity in the Rose Cottage parlor?

"This ugly little pinafore has a very big hem. It will last you for years. You can wear it to college, you can get married in it and then you can get burried in it." -Sara Stanley

"Responsible, you? That would be the frosty Friday." -Hetty King

"Go give something of your own away if you want to be blessed!" -Sara Stanley

This episode is almost entirely sap free, which is a welcomed change of pace.

(1) The title of this episode was derived from a poem called, "There Was A Little Girl." Although many believe this is a Mother Goose rhyme, the poem is often credited to Henry Wadsworth Longfellow (1807-1882), who allegedly wrote it for his second daughter.

(2) Interestingly, Montgomery makes a reference to this poem in the chapter "How Betty Sherman Won A Husband" from The Story Girl where the "little girl" is compared to the most unlikely of people, Mr. Campbell (Book Mr. Campbell is 'Wellington Campbell' in the series). "...Mr. Campbell resembled the famous little girl with the curl in the middle of her forehead," narrator Beverley would lament. "When he was good, he was very, very good, and when he was bad he was horrid."

(3) The boat seen when Gus and Sara are departing for the main land is an old time sailing ship called 'The Empire Sandy,' and is often seen sailing in the Toronto Harbour.

(4) In the casting credits, Robin Stevens is given the role of "off camera actress." This most likely is the role for the person playing the back of Sara Stanley's head. This episode has an eerie 'Patty Duke Show' quality to it.

(5) The sailor who notifies Gus about Captain Crane is played by John Weir, who would later play Gurney MacDonald.

Jo Pitts is hilarious in the classroom! It's refreshing to see Sarah Polley play someone other than a goody two-shoes character.