Episode 3.1: The Ties That Bind 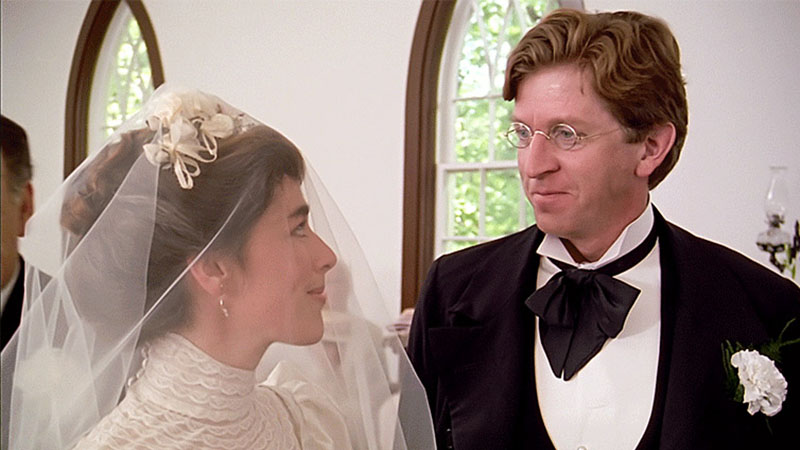 When Hetty catches Jasper and Olivia's trying to elope, she takes full charge of their wedding arrangements. Panic ensues as Olivia's wedding dress is misplaced and the wedding appears to be in shambles.

This episode should have been called 'Family Rivalry part II.'

When Hetty catches Jasper and Olivia trying to elope, she nearly beats Jasper senseless with a broom handle. It's funny when Hetty begins to stutter while trying to say the word "elope" and Jasper has to complete the word for her.

Hetty puts tremendous stress on her family with her momentous wedding arrangements. The conflict between Hetty and Olivia intensifies until they can't even speak to each other.  Issues are resolved when Hetty realizes that a continued conflict would only separate her further from her family.

Jasper struggles to overcome his nervousness around people. Sara helps Jasper prepare a toast to Olivia, but he eventually discards the prepared speech and confesses his true feelings for her his own way.

At the end of the episode, the King family are standing in front of the King farmhouse and waving to the departing newlyweds. The only problem is that Jasper and Olivia are shown waving back while leaving Rose Cottage for King farm! Let's see someone explain that!

Did anyone else find the switching of the dresses too predictable?

Wasn't it surprising how Hetty welcomed Jasper into the King family?

"Rose Cottage isn't going anywhere. It will always be there for you." -Hetty King

After discovering Olivia and Jasper's plans to elope, Sara exclaims "That's the most romantic thing I've ever heard!"

(1) The Disney version of this episode was entitled, "Sister of the Bride." Perhaps this was a ploy by Disney to get a rating from viewers who would confuse it with "Father of the Bride."

(2) This episode marks the first appearance of Ulele Bugle and Digger.

(3) The Pinesgrove Church in Coppins Corners, east of the Avonlea site, was used as the Avonlea Presbyterian Church in the present episode, as well as the episode 'Conversions.'

(4) That really looked like an older Fred bell in the pews during the wedding. You might remember Fred Bell vaguely as one of the boys in Rachel Lynde's Sunday school class from 'Quarantine of Alexander Abraham's.' That guy spends a lot of time in church!