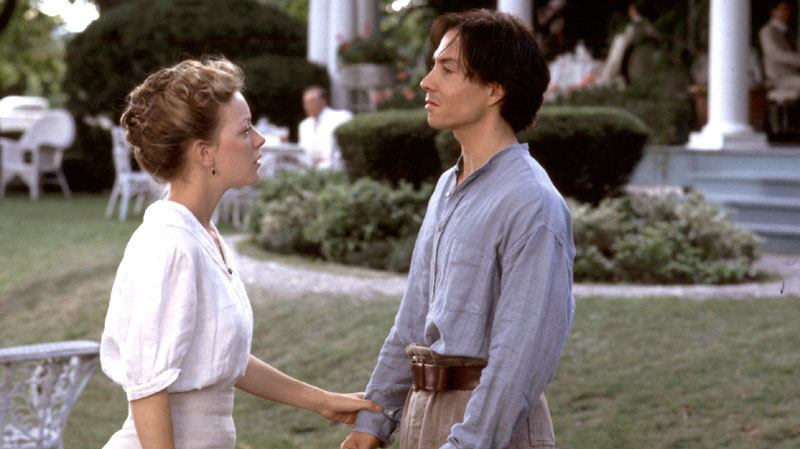 Felicity receives a mysterious call from Charleston and suspects that Gus might be alive.

In the opening moments there are a few signs of what is to come: Felicity is on the beach wearing Gus's ring and Hetty is thinking about Gus and disapproving of Felicity's pending marriage to Stuart.

While Felicity is preparing for the wedding, she receives a call from a nurse in South Carolina. Felicity suspects that Gus is still alive and trying to contact her. Hetty and Felicity begin their voyage aboard the SS Savannah and meet a furniture salesman from Charleston, Horace Beck, who appears to play a caretaker role of sorts.

While questioning several people about Gus, Felicity finally finds a young sailor named Jimmy, who survived the Maid of Calais wreck and knew Gus Pike. Jimmy recalls that Gus refused a lifeboats and heroically stayed behind to send a signal, in hope that a vessel would rescue them. Jimmy claims that Gus drowned, but Felicity is unwilling to give up.

She follows a lead to a hospital, where the nurse, Megget Lydie, claims that she has never seen Gus. A young nurses aid, Odelia, is shocked when she finds Felicity searching for Gus, which raises Felicity's suspicion. Later that night, Felicity sees Odelia with Jimmy and the mystery deepens.

The next day, Felicity continues to search and finds Odelia at the church with Megget Lydie. Lydie finally folds and brings Felicity to her home. Felicity finally meets Gus, but is devastated when he doesn't recognize her and furiously tells her to leave.

Megget Lydie later tells Felicity that Gus was blinded after the wreck and that a troller picked him up while he was barely conscious. Horace Beck encourages Gus to give Felicity a chance and Gus finally allows Felicity to speak with him.

Gus tells Felicity to get on with her life, but Felicity claims that she won't go back to Avonlea without him. Felicity sends a message to Stuart, informing him that she's coming back to Avonlea.  She doesn't tell him however, that Gus will be coming with her; nor does she tell Gus that she is engaged to Stuart.

There is something so absurd about the obscure furniture businessman, Horace Beck. It's hard to believe that he would have all this time to run around and counsel complete strangers on relationships. I'm surprised he doesn't help arrange the wedding too.

Didn't Hetty and Felicity pack a lot of luggage on their trip?

"What is this? Common brawling in the public road? Heavens to Molly! What have the Kings come to?" -Hetty King

"Return to me... Promise?" -Stuart McRae

(1) The events with Gus, Felicity and Hetty continue in the final episode and bring the series to a conclusion. Sullivan Entertainment released a video containing the current episode and the final episode So Dear to My Heart. The video includes cast interviews and a brief behind the scenes glimpse at the production of the series. The title of the video is 'Return to Me' and features newlyweds Gus and Felicity on the front cover (That doesn't give too much away does it?). This is an ironic title, considering that Stuart was the person who asked Felicity to return to him.