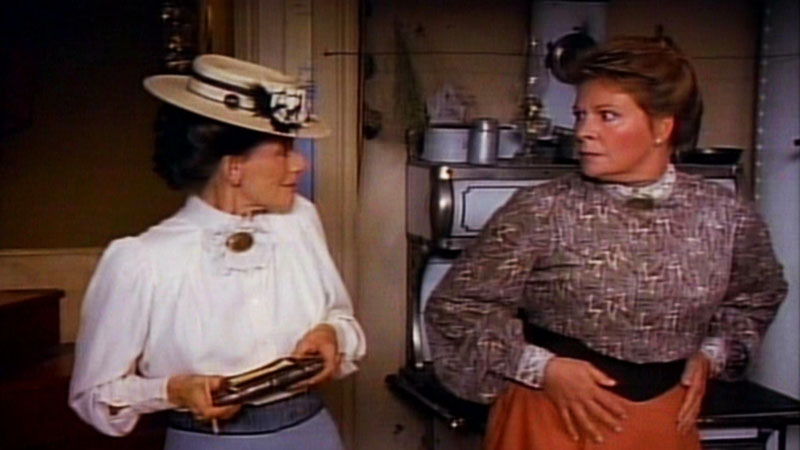 Among the cast, there was a rivalry between Jackie Burroughs and Lally Cadeau that was only tempered by mutual respect. This was demonstrated in Knowlton Nash's 1996 book "Cue the Elephant!: Backstage Tales at the CBC."

Jackie Burroughs intense determination to develop her character onscreen often created tension with other cast, particularly Lally Cadeau. “I’ve heard that they think I’m bossy,” Burroughs said. “I’ve heard I’m difficult to work with. I am bossy, actually. I want to do it the way I want to do it. It’s easy to tread on other people’s toes without even knowing it. If you’re me, it is anyway, evidently. They may think I’m bossy and upstaging, but I don’t mean it. I’m just taking my role to the limit.”

Some felt Burroughs occasionally went beyond the limit. “You just never know what to expect from Jackie,” Lally remarked. “She cares deeply about the scenes. She knows a lot and she’s been around for a long time. She’s an interesting dichotomy of self-involvement and democracy. She’s a humanitarian who doesn’t give a damn about anybody.

“Sometimes she’ll be in every one of your shots so that you never have a clean close-up. She’d twirl and umbrella behind you or get her hand on your shoulder or her head popping up over your shoulder. Once when Jackie was bobbing hysterically up and down in front of me, I said, ‘Will you get out of my face.’ She recoiled like a snake and slithered away, and she didn’t talk to me for about two months."1

Actors upstaging each other is nothing new. Although Jackie believed that she was taking her character to the limit, many of her co-stars felt Burroughs was encroaching on them. This included Patricia Hamilton, who's equally strong willed character Rachel Lynde was entangled in a 36 year cold war with the indomitable Hetty King.

Cadeau remembers Pat Hamilton telling her how alarmed she was at playing a scene with Burroughs. “I’ve got three days to be totally prepared for this scene with Jackie,” Hamilton told Cadeau. “I don’t want her to have any control.” Cadeau said she was chagrined watching Gordon Pinsent act with Burroughs in one TV show. “She did a million-trillion bobs and weaves and banks around him, and Gordon just sat there,” she says. “Maybe Gordon was overwhelmed or tied. It was kind of sad and you’d think, ‘Come on, Gordon, fight back!”

This kind of criticism always surprises the sharply focused, talented Burroughs. “I don’t believe in upstaging,” she says. “I really like working with actors. People say I think like a director, but I wouldn’t want to be one. I don’t want anybody else to boss me, but I don’t want to boss anybody else, either. I just don’t like being controlled.”

“I have to be involved in the entire project,” says Burroughs. “I like to watch other people’s scenes. I just couldn’t come in and do my part. It would be too lonely for me. But then I get bossy and get into terrible trouble because I have lots of opinions on how it’s being shot, the lighting and everything. I’m being a nuisance to help the program.”1

Mag Ruffman recalled one altercation with Jackie while filming the episode 'A Dark and Stormy Night.' "We were out in the snow by the lighthouse and (Jackie) was directing me as usual(laughs). I got really irritable, but not as irritable as (Jackie)... I thrust my coffee cup into the snow and (Jackie) thrust hers... We got a good moment out of it because we ran down the hill screaming."

Despite the antagonisms that existed on the set, there was genuine respect between the actors. Mag has said that she and Jackie would often enjoy fries with each other after filming. Lally has also expressed her respect:

"She's a wonderful actress and working with her has been a fascinating experience," Lally would later comment. "We steered pretty clear of each other most of the time. I think that's because we understand one another and realized that we got on each other's nerves a lot. Jackie has boundless energy and tends to suck up the energy in a room. Everyone else is left to try to hold their own."1