Road to Avonlea was bigger than Hockey in Canada 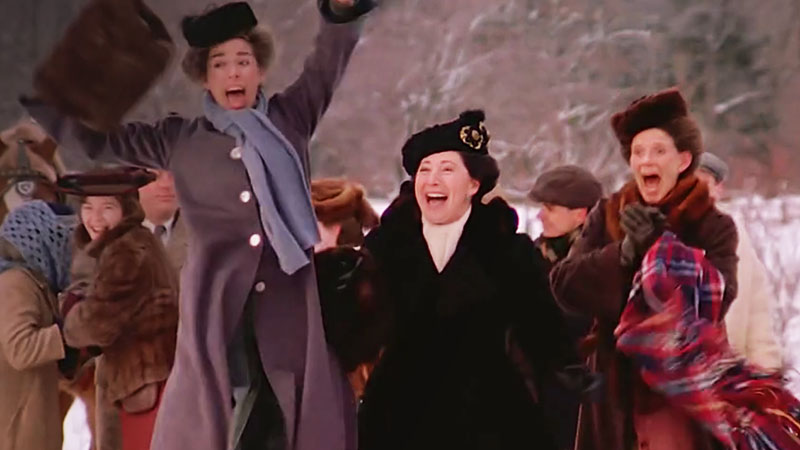 Hockey is more than just Canada's national sport--It's part of the Country's national identity.  Generations of Canadians listened and watched Hockey Night in Canada as a Saturday night tradition.

That's why it may come as a surprise to some that Road to Avonlea consistently beat Canada's national past time in the ratings--Beating, bludgeoning, and sending Hockey Night in Canada staggering to the bench.

Road to Avonlea dominated hockey from the very beginning. The ratings for the BBM Bureau of Measurement on March 7, 1990 ranked Avonlea 5th for that week with 2,240,000 viewers ahead of Hockey Night in Canada with 2,120,000 viewers. Hockey was battered in the ratings by what the Vancouver Sun described as an "appetite for sugar and spice and everything nice. (1)"

Between Jan 1 and December 20, 1991, the Nielson Ratings reported that Road to Avonlea scored another victory over hockey. In the top rated series category, Road To Avonlea led with 1,434,000 viewers; followed by Hockey Night In Canada (2).

Incidentally, the drama E.N.G scored its highest audience of the season, 1,237,000 viewers, still beaten by Avonlea.  You may recall that ENG was almost selected by CBC over Road to Avonlea detailed in the #4 entry for my article Five Things that Almost Derailed Road to Avonlea (As We Know it).

The Toronto Star remarked on this phenomenon in March 1992:

And in Canada, we've never seen anything like the success of The Road To Avonlea. The family drama features several child stars - lead by the utterly charming 13-year-old veteran, Sarah Polley.

It regularly pulls in an amazing 2 million Canadian viewers, has often knocked Hockey Night In Canada off its perch as the No. 1 Canadian show, and has become the No. 1 show on the Disney Channel in the States. (It is seen in some 40 other countries as well) (3).

In April 1992, the Vancouver Sun praised Avonlea as "CBC's good news this season," reporting that Avonlea held fast with 1.64 million viewers for the year overall, outpacing Hockey Night in Canada with 1.4 million viewers. (4)

Reeling from the constant pummeling, The Gazette moved in and scored the victory goal with the following declaration in January 1995:

The best Canadian program on television is finally beginning its season - and I don't mean Hockey Night in Canada.  Road to Avonlea starts Season 6 tonight. The CBC will launch its finest series with two episodes... There is nothing else quite like it on TV (5).

Any hoser that still calls the series only a kids show needs to go to the penalty box.

With this unprecedented ratings triumph over Canada's national past time, the CBC would never disrespect Road to Avonlea by pre-empting the final four episodes of the first season, right?