Caution Ahead: The Road to the Avonlea Christmas Movie 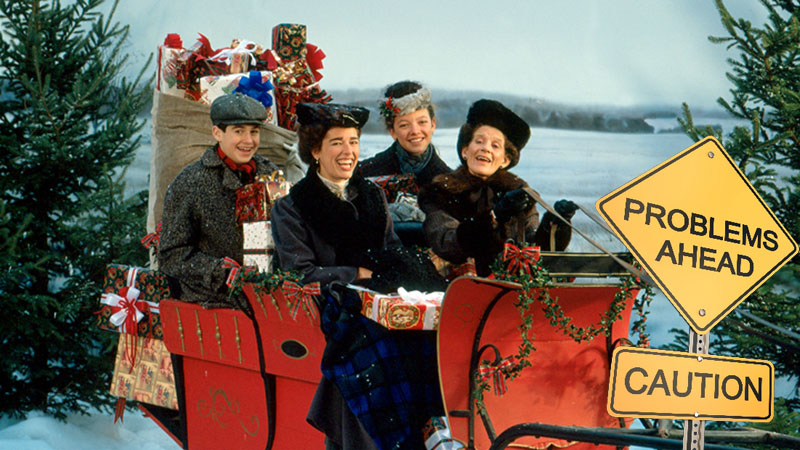 As the 20th anniversary of the first CBC airing of Happy Christmas Miss King approaches, we take a look back at the early production of what would become Road to Avonlea's only reunion film.

When Road to Avonlea wrapped in 1996, Sullivan was hesitant to bring back his hit series.  However, there was one possibility that attracted him.

"We never did a Christmas movie," Sullivan told the Toronto Star.

During the series, Disney and CBC played Scrooge and discouraged a Road to Avonlea Christmas special, claiming that it would somehow disrupt their scheduling.

Nevertheless, Road to Avonlea and Christmas seemed like a perfect match ('Christmas in June' not withstanding) and this tantilizing opportunity was not the only thing drawing Sullivan back to Montgomery's world.

At the time, Sullivan's website was receiving up to 50,000 hits a week from fans clamoring for a reunion film and even asking if the Avonlea cast would appear in Sullivan's 'Wind At My Back.'  "I get a lot of pressure from people to do more with Anne and Avonlea," he said.

Cast members were also intrigued by the possibility of a reunion film. When Jackie Burroughs was asked if there would be a reunion, the actress said "Why not!" But they'd have to rebuild the village first."

The costly Uxbridge set was destroyed after the seventh and final season of Road to Avonlea and the interior scenes from the Scarborough warehouse had been moved or modified.  Despite this, Sullivan told the Toronto Star that the set could be duplicated.

Sullivan decided that Raymond Storey would write the film.  One of the reasons Storey was selected by Sullivan was because the writer has an affinity for period drama and an eye for detail.  "That's why we have an understanding of period (drama): we've studied it. And we're also used to working in a very hands-on way."

Sullivan's next task was to approach the actors.  It was questionable whether Jackie Burroughs would return considering that she used to argue with the producer over how he treated the actors.

Despite these disagreements, the actress was willing to resume her pivitol role as Hetty King.  "I didn't have any unsolved agony, didn't have any axes to grind, because I fought all the way along," Burroughs said. "And I have this lovely house in Mexico thanks to Kevin."

Burroughs built a home in the hills of Ozxaca out of proceeds from Avonlea and her performance in Happy Christmas Miss King paid for the June wedding of her dauther Zoe in Kingston.

Mag Ruffman was filming the second season of her do-it-yourself show, Fix It With Mag Ruffman' on the Women's Television Network. After wearing a corset as Olivia in the mornings, Mag would don her toolbelt in the afternoon to film her repair show.

"It's amazingly hard because I've had emotional scenes. I arrive on the set of my show all puffy-eyed and emotionally exhausted and I've got to plumb a toilet. Plumbing, at the best of times, is really horrible. When you're in a kind of miffed mood, it's pathetic."

"When you create a character, it doesn't go away," Mag reflected. "You sometimes wonder how she's doing."

Cedric Smith returned as Alec King and shot an amusing criticism toward the series' successor.  "Lots of people miss the show because it never has really been replaced," he said. "That's what Wind At My Back is supposed to be doing, but I don't think it has done that at all."

Gema Zamprogna graduated from Queen's University that Spring with a BA in arts, drama and film and was looking to resume her acting career.  "I've lived a completely different life for the last three years and did no acting," she said.

When Gema met Lally Cadeau on the first day of filming they "started laughing and we had tears coming down our faces because we couldn't believe how strange it was we were doing this again."

Happy Christmas Miss King began shooting near Pickering in the sweltering August heat of 1998. In the midst of this heatwave, the film crew were wearing shorts and T-Shirts while the regular cast and extras were wearing overcoats, furs and boots.  Fake snow was draped over the roofs and sidewalks.

The cast was back and the script was set.  Behind the scenes, producer Ray Sager was imagining more Avonlea reunions. And why not?  Road to Avonlea was the greatest series in Canadian television history and had a legion of fans.

The success of the Christmas movie was destined to launch multiple films and possibly a spin off series or two.

What could possibly go wrong?