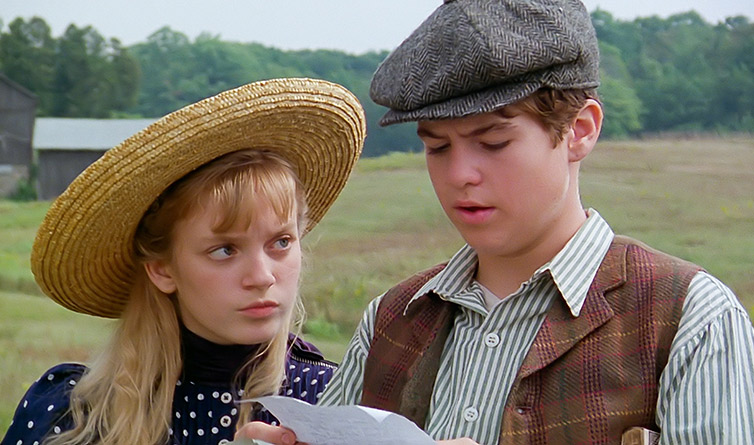 Olivia discovers that Izzy is outgrowing her tom boy appearance and convinces Clive to buy his daughter a dress.

There are actually several friends who are in need, but Rachel is the only person that is vocal about her needs, which isn't surprising.  Izzy and Davy aren't vocal out of embarrassment for their predicaments.

Davy needs to learn how to read, but is too ashamed to tell anyone.  When Davy makes up Sara's essay on how she spent her summer vacation, Sara learns about his problem and promises to help him learn how to read.

Izzy gets pressured from her peers at school for her tom boy appearance and desires a dress, but is too embarrassed to ask her father, who is unaware of his daughter's maturity. Olivia suspects that Izzy tried on a dress she made for Cecily and confronts Clive, convincing him to buy a dress for his daughter.

The town suspects that Rachel's son is in jail for committing murder and the gossip naturally spreads to Hetty. In a hilarious scene which is somewhat reminiscent of a Three's Company episode, Hetty consoles Rachel about the tragedy. Rachel clarifies the misunderstanding by informing Hetty that her son became chief Constable of the prison.

Wasn't it funny how Clive asked Izzy to keep Morgan's picture as inspiration?

"The teacher liked Dora because she sat still and never brought worms to school." -Davey Keith

(1) In a summer 1995 interview for The Avonlea Traditions Chronicle, Heather Brown was asked if she liked the way her character was changing.

"I think they should keep the tomboy aspect of it because it just keeps in that kind of versatility of being a boy and a girl at the same time... I just love doing Izzy. It's a good role and it's hard because I can't relate to it all that much."

(2) Muriel Stacey becomes proprietress of the General Store. Felicity explained that the Lawson's purchased a store and moved to New Brunswick.