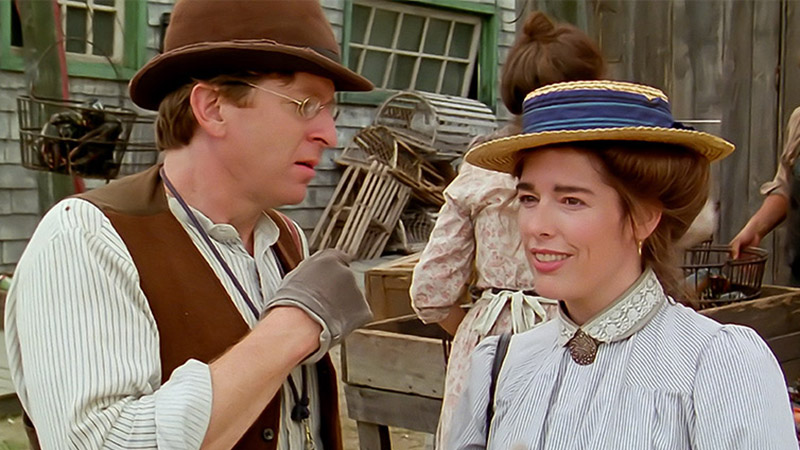 Hetty purchases the cannery to prevent H.B. Dunn from converting it into a distillery. Jasper and Olivia are determined to run the cannery but must overcome their own financial difficulties.

When Jasper's infallible fishing rod fails, he takes a job as a banker in Hillsdale to support his family (Jasper apparently had the opportunity to work as a banker in 'Tug of War', but he might have turned it down). Jasper gets into trouble at work while concentrating on inventions that would improve the bank rather than his job as teller.

The interaction between Gus and Felicity when Gus is late for their picnic is really funny. Hetty is outraged to learn that the American Industrialist H.B. Dunn is planning to convert the cannery into a distillery, which he purchased in'Home Movie.' She quickly retaliates by buying the cannery, which is probably the hastiest decision she has ever made.

Realizing that he's too innovative to work at the bank, Jasper jumps at the chance to run the cannery. He uses Ford's concept of the assembly line and the cannery quickly becomes operational again. The investors are reluctant to support the venture however, and Jasper and Olivia have to put Golden Milestone up for collateral.

Olivia is able to acquire lobster cheaply but the King family must help the work effort in order to meet the deadline for distributing the lobster. After working throughout the night, all the lobsters are canned and the Dales are able to repay their investors.

One of the red cannery doors is really just Jasper's workshop door with a net tossed over one of the nearby barrols. This isn't too surprising since the set for Golden Milestone is just the other side of the cannery.

Isn't it funny how Felicity says she's stranded in the Country side, yet she's so close to King Farm and the town?

Did you ever think you would see Hetty canning lobsters?

Did Janet really ask Felicity if she would hang out with Sally Potts?

"Well, ah'm ready to stop imaginin' and start tastin.' Where's the grub?" -Gus Pike (after showing up late for his picnic with Felicity)

"I can't believe that Gus has three jobs. What am I suppose to do all summer? Talk to myself in the looking glass?" -Felicity King

"You can rest assured that I have no intentions of spending the rest of my days canning lobsters, not besides the likes of Lionel Lester." -Hetty King

Felicity whines about being bored without Gus. Jasper and Olivia kiss at the end of the episode.