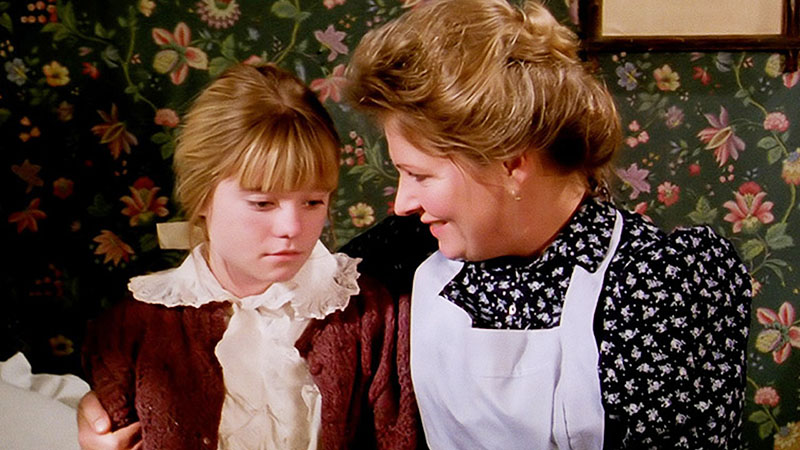 The King family are devastated when Cecily contracts tuberculosis. Alec and Janet must make a painful decision on whether to send Cecily to a sanitarium.

Cecily is constantly coughing and after a diagnosis from Dr. Snow, it is discovered that she has contracted tuberculosis.

The King family is devastated and memories of Ruth are evoked by Cecily's illness.  The town reacts with fear and Simon is forced to release Felix from the hotel.

Felicity decides that she wants to learn more about Cecily's illness and travels to the Charlottetown library with Muriel Stacey to do research. They discover articles written by a prominant doctor and visit her in Summerside.

Felicity is astounded that the doctor is a woman and it inspires her to postpone teachers college and seek a career as a medical doctor. Felicity argues with Janet that Cecily must seek treatment in a sanitarium, but Janet refuses to let Cecily leave King farm.

Janet visits Dr. Jones and eventually learns that Cecily's condition will only improve under the advanced treatment of the sanitarium. In a very memorable moment, Alec sings 'All Through The Night,' which brings temporary comfort to the pain experienced by Cecily's increasingly ill condition.

Janet decides to do whats best for Cecily and accompanies her to a New England sanitarium.

This episode is so sad. Not just because of Cecily's illness, but because it's the final appearance of Harmony Cramp and little was done with her character.  Even in her final episode where Cecily is supposed to be the primary focus, all the attention is shifted back to Felicity and her many career changes.

There is nothing wrong with the story line with Cecily becoming sick. In fact, it is consistent with the Montgomery literature (see notes). The saddest part is that it reminds fans about what could have been.

There were sixty episodes before 'Thursday's Child' where Cecily could have been given a story line or some other role besides staying at home. It's almost too bad that certain special guest stars (cough, Robbie Benson) were given episodes that could have taken away from episodes where Cecily's character could have been more prominantly featured and explored.

Isn't Daniel a bit too old for that crib?

"My future is completely black. I'm doomed! Absolutely none of my clothes are right. I might as well just have 'farm girl' in large letters stitched across my back." -Felicity King

(1) This episode marks the last appearance of Harmony Cramp as Cecily King and for a decade there remained confusion about her inexplicable departure from the series. Harmony appeared at the 2004 Avonlea Convention and explained that the producers decided another actress was needed to further develop Cecily's' character.

This unpopular decision was impacted by key actors leaving or appearing less frequently, requiring that Cecily's character become more dynamic. Shelly's Avonlea reported that during the 2004 convention, Harmony said that she might return to acting when her 5 year-old daughter becomes a little older.

(2) Bobby remembered that during the second AvCon, composer John Welsman mentioned a deleted video scene called "The Raven" from 'Thursday's Child.' Apparently, the scene depicted a sickly Cecily nursing a dying raven back to health. She releases the recovered bird from her hands and it takes flight. Welsman was supposed to compose music for the scene, but the producers told him to cancel the project.

(3) In Chapter 30 of Lucy Montgomery's The Golden Road, it was suggested that Cecily would die after losing her battle against her pending illness. This was demonstrated in the following passage where Beverley, the narrator, is commenting on Sara Stanley's fatalistic knowledge of Cecily's future demise:

"Did she realize in a flash of prescience that there was no earthly future for our sweet Cecily? ...The end was to come while the rainbow still sparkled on her wine of life, ...Long life was before all the others who trysted that night in the old homestead orchard; but Cecily's maiden feet were never to leave the golden road."

Heather Conkie did a really good job of handling this delicate story.