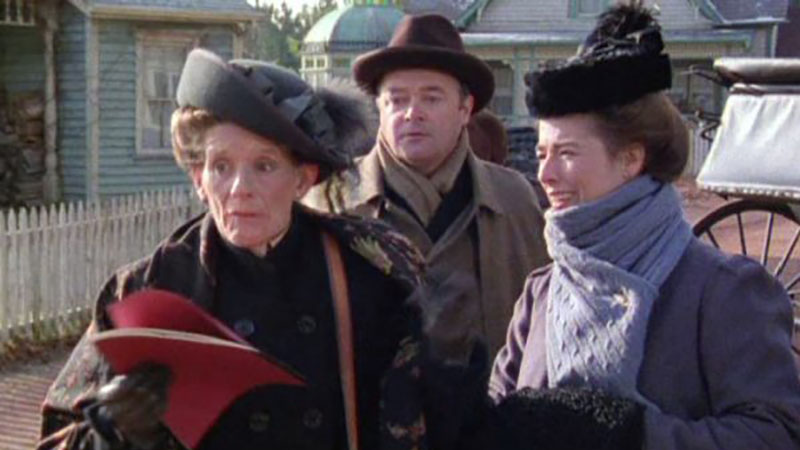 While fretting about who will play the lead role, Hetty and Olivia overhear Janet reciting a scene from the play. Overwhelmed by Janet's acting abilities, Hetty makes Janet the leading lady in her play, 'The seductive Roue.'

The plans change when Hetty discovers that the famous actress, Isabelle Carrington, has arrived in Avonlea. After considerable praise, Carrington agrees to play the leading lady and Janet is dropped from the play.

Carrington's behavior on the set becomes intolerable and Hetty fires the actress. Hetty begs Janet to return to the play and Avonlea wins the competition.

Remember how Hetty was so defiant against acting and dramatics throughout the series? In the episode 'It's Just A Stage', Hetty remarks that "Actors are deceivers. People who pretend to be something else for a living aren't right in the head."

Well if this is the case, then why is Hetty the the director for the Avonlea play? To make matters worse, it's pointed out that she has been the director for many years. Hetty's character is completely inconsistent in respect to her stand against drama and the arts in the first two seasons.

Were you surprised that Avonlea won the drama contest?

"Why should we be made to suffer on account of that miserable Isabelle Carrington." -Hetty King

(1) The Avonlea town hall in this episode was actually a church in the Westfield Heritage Centre in Rockton. The graveyard of this location was used in a scene in 'The Journey Begins,' where Felicity and Felix were tricked into wishing upon magic seeds.

(2) Marilyn Lightstone is not featured as a special guest star.

The huge inconsistency with Hetty's character killed the validity of this episode.