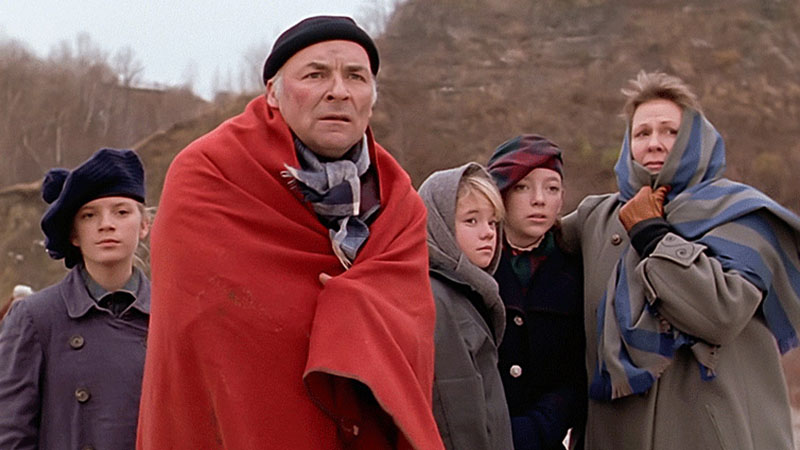 Alec's childhood friend is killed during an offshore explosion, leaving behind his penniless wife, Evelyn. Alec attempts to help Evelyn, but his involvement with the widow causes the town to gossip and puts pressure on his family.

Synopsis: Alec's childhood friend is killed during an offshore explosion, leaving behind his penniless wife, Evelyn. Alec attempts to help Evelyn, but his involvement with the widow causes the town to gossip and puts pressure on his family.

Overworked and exhausted from working two farms, Alec begins to blame himself for Emmett's death. The king family begin to feel pressure from the town gossips about the amount of time that Alec is spending at the Greer farm with the young widow.  Alec meets strong opposition from his family when he suggests that the King family principle be invested on the Grier farm.

The theme concerns letting others become stronger by dealing with problems on their own. This is best exemplified with Gus's encouragement to Alec to allow Evelyn to overcome the grief and financial burdon left in the wake of her husband's death.  Hetty also describes a young Olivia's striving for independence and Janet dropped several hints to Evelyn about teaching her children to manage for themselves.

Evelyn eventually realizes that she must build her own life. She sells the farm and leaves for work at the conservatory in Toronto. Alec is reluctant to accept Evelyn's departure because it means abandoning his committment to the memory of Emmett.

Why didn't Alec want Bert Potts to have his shoes?

Did you see the expression on Felicity's face after she agreed to help Gus clean the stalls?

"You know Hetty King, you are often a remarkable woman." -Janet King

"Ya carry someone elses burdon for 'em... Don't ever expect them to get strong enough to carry on without ya." -Gus Pike

(1) Unlike many of her fellow Disney mandated actors, Meg Tilly, who stars as Evelyn Grier, had an appreciation of L.M. Montgomery's works.  The Chicago Tribune reported:

On Monday, there is a particularly touching episode on "Avonlea." It casts Meg Tilly as a woman who comes to town with her husband, a former resident of the town, and their baby, and soon is steeped in the aftermath of a tragic accident.

Tilly, who grew up in Canada and lives there with her three children, loved the idea of playing a woman who is a whole person.

"I grew up reading Montgomery's books about Avonlea and I secretly identified with her heroines," she said. "I knew the character of Evelyn that I play because I have seen women like that growing up where I did."

Tilly's upbringing was simply wonderful, as she describes it. She could run in the woods with any of her large brood of brothers, sisters and half-brothers and yet enjoy the surge of independence whenever she wished just by going off by herself.

(2) Peter MacNeill, who plays Emmett Grier, performs as two television characters that die within weeks of this episodes' airing.  According to the Toronto Star:

Peter MacNeill, another of Canada's excellent character actors, is not being allowed to live on Canadian TV. He died of cancer on a recent, emotion-charged episode of E.N.G. and last Sunday was blown to bits at sea early in the most dramatic episode yet of Road To Avonlea. In both shows, he vigorously played the lead male actor's best friend, not referred to before, seen in just one episode and then gone forever.

Road to Avonlea beat out ENG for the Sunday night top spot on CBC .