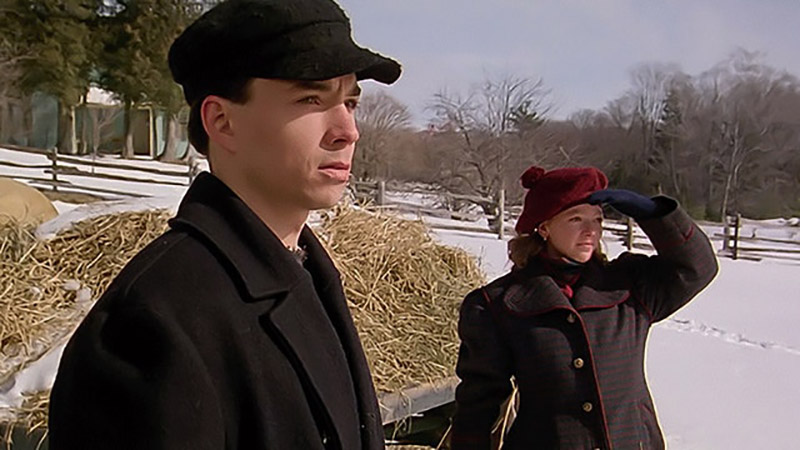 Felicity must choose between Gus and Arthur, as the rivalry between her two suitors intensifies.

Felicity chases Felix yet again after he steals her copy of 'Every Girl's Calendar,' which featured an article on how to find a 'perfect beau.'

Felicity is impressed when Arthur saves the King farm pigs, which naturally makes Gus jealous. Arthur reveals a bizarre interest in mythological sea creatures, which only makes his somber character even stranger.

The rivalry between the two suitors reaches it's peak when Gus and Arthur fight in the barn. This is easily the best fight so far in the series.

Felicity spews out perhaps her most biting remark since the first season when she tells Gus that all he has of worth are a pair of fishing boots. Gus proposes to Felicity with his ruby red ring that he received from Captain Crane (2.9: All That Glitters); but she refuses his proposal, telling him to wait for two years.

When Arthur calls on Felicity, she promptly rejects him as a suitor.

In a weird final scene, Arthur is seen watching Gus and Felicity near the lighthouse in his dark coat and hat. He has a very perturbed and sinister expression on his face, which suggests that the possibility of a continued rivalry is still open for future episodes.

What's even stranger is that the closing credits that follow this somber scene is the Western style happy song that closed 'Moving On.'

Felicity seems most out of character in this episode. She appears to lose her mind during the rivalry and rambles incoherently. Hetty for some reason is attempting to counsel Felicity on relationships, but this is a task her mother would most likely handle. After all, Hetty was the one telling Sara not to get bamboozled by any 'love business.'

Doesn't Arthur look like he's going to go off on someone at the end of this episode?

"Gus Pike, your behaving like a wild savage!" -Felicity King