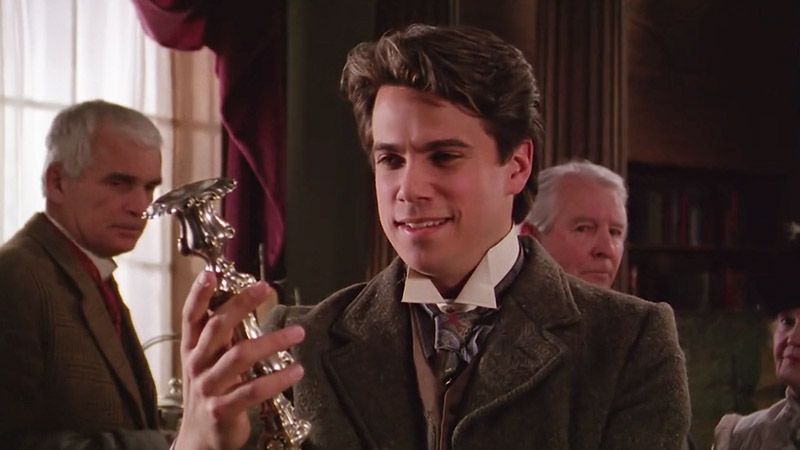 Sara decides that she wants to be a writer and seeks an interview with Gerald Young, an admirer of antiques. She soon discovers that Young has a dual identity and leads an eccentric life.

Sara isn't for certain what to do with her future and is upset when Hetty attempts to plan it for her, including plans for her inheritance. Despite Hetty's plans, Sara decides to become a writer and seeks out an interview with antique dealer, Gerald Young.

The elusive Young is really Jonathan Ravenhurst Blackwell, the nephew of Lady Blackwell. Neither of the Blackwell's get much of an introduction, but it probably doesn't matter anyway.

Blackwell, pretending to be Young, holds an antique restoration meeting in the White Sands, (where he and his Aunt are staying) while he makes estimates of the worth of the villagers' antiques. He obviously has no fear that his Aunt might walk into the high profile gathering.

Ullele Bugle brings in valuable candlesticks and Young requests to observe them. Gus begins to shine them but they fall apart.

Ullele Bugle returns looking for Young, but he has disappeared. Fearing that foul play might be involved with the disappearance, Lady Blackwell calls the Constable.

The Constable searches King Farm, obviously never hearing of a search warrant; and Gus is arrested, yet again, as an accomplice in the disappearance of both Blackwell and Young.

Young hides out at King Farm and Sara keeps his cover, in exchange for an interview. When Sara pries deeper into Young's background, he admits that he is both Blackwell and Young and has an appreciation for antiques.

This episode doesn't make much sense. Some of the episodes where the Disney channel demands American actors appear to be thrown together at the last minute without much thought (i.e. A Dark and Stormy Night).

It's not really explained why Blackwell was compelled to maintain a dual identity in order to appreciate antiques. In an even worse disguise than well, himself, Blackwell masquerades as investigator Doyle E. Reichenback.

Reichenback sports dark John Lennon glasses, a Wyatt Earp mustache, a Bat Masterson hat and speaks with an obnoxious Marvin Martian voice, which manages to be even more annoying than Robby Benson's own slurring voice.

Lady Blackwell really didn't have much of a role in this episode. This is unfortunate, considering Diana Rigg has played prominent roles in many mystery movies and television shows--most notably the quirky 'Emma Peel' from The Avengers.

...And why does Jonathan Ravenhurst Blackwell keep his admiration for antiques a secret again?

Did I miss something with all his incoherent slurring?

Since when did the Constable have such a silly outfit?

Since when did the Constable have an outfit at all?

"I just love all this murder and mysterious mayhem!" -Felix King

(2) Diana Rigg has played in many British spy movies and television shows, including the James Bond movie 'On Her Majesty's Secret Service (1969)', and her role as quirky Emma Peel in the British television series,'The Avengers (1961)'. She was knighted in 1994 for her contributions to British theater and film.

(3) Robby Benson has never been knighted.

I would try to avoid this episode.