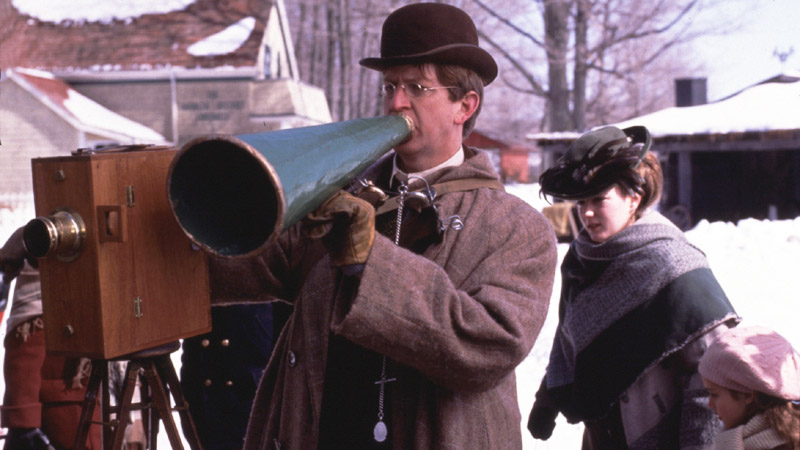 Hetty and Jasper rally to prevent an industrialist from transforming Avonlea into a town of the future.

An American industrialist presents a plan to convert Avonlea into the town of the future by buying the villagers property. The majority of the town supports Dunn's offer, but Hetty stands strongly against it.

Hetty frets about Jasper's financial instability. Jasper obviously didn't take the job at the Markdale bank, which makes me wonder what the purpose of him leaving a pregnant wife at home to search for that job was all about in the first place (4.1: Tug of War).

The topic of change is once again presented and reveals the contrast in the opinions between the family members. Olivia and Janet share the view that the future is inevitable and that you cannot stand in the way of progress. Hetty on the other hand, defies change and stands for tradition.

Jasper describes his plans to improve Edison's motion picture camera to Sara, but is distraught that he doesn't have the funds to conduct the research. Sara makes a phone call, mimicking Hetty's voice, in order to purchase Jasper's camera with her funds; but Ullele Bugle overhears the call and believes that Hetty is planning to buy out land and sell it back to Dunn.

In a powerful scene with Sara and Olivia, Sara mentions that she cannot remember her mother's voice. It must have been painful for Sarah Polley, who lost her own mother, to complete this scene. Jasper listens carefully to the conversation, which will have a significant meaning later, when Jasper realizes the importance of keeping a recording of loved ones for future generations.

Jasper begins research with the camera and begins to film the daily lives of the villagers. When the town confronts Hetty about Sara's phone call, Sara must reveal her scheme. Jasper is devastated and plans to return the camera to the Edison company.

Sara threatens to return to Montreal if Hetty doesn't accept Jasper's experiment and allow him to continue his research. Hetty compromises and realizes that Jasper's motion picture camera can be used to demonstrate how the townspeople lived at the turn of the twentieth century.

Together, Hetty and Jasper show the motion picture to the town and emphasize the importance of community against the rapid change of industrialization. Swayed by the heartfelt images of the film and Hetty's passionate speech supporting tradition, the town unites against Dunn and tears up his offer.

It's ironic how the emergence of technology threatens to destroy Avonlea, but Hetty and Jasper use technology to save the town.

Wasn't it funny how Ullele Bugle suggested bidding between Hetty and Dunn to get a better price?

"In a thousand years from now I suppose, there will be little left to tell of our simple existence; but then, perhaps this moving picture will speak to those who come after of how we P.E. Islanders grew up, lived, married and died at the beginning of the twentieth century... Which is why we have chosen to record for all time our response to Mr. Dunn's offer to buy up our town..."

"So when you look around you, at the homestead lights, at the fields tilled by the dead and gone who loved you, you'll say, 'why I've come home... To this life.'" -Hetty King

(1) Producer Kevin Sullivan commented on the importance of this episode in the original 'Road to Avonlea' website production notes:

"To me, this particular episode in the series was timely, because it made the audience reflect on why they like Avonlea. The fact that it has a certain innocence and nostalgic factor, is because it is a place that can no longer be reached today."

(2) In 1992, Sullivan received a collection of 16mm films that contained Sullivan family images from 1920-1960. This sparked one of the themes for 'Home Movie,' and essentially the series, that "families and communities are the architecture of our society."

(3) During the September 2005 Q/A chat at the Avonlea Message Boards, Kevin Sullivan explained that 'Home Movie' was specifically written so Sarah could mourn her mother. Sarah's mother, Diane Polley, died of cancer in January 1990.

(4) The Disney Channel title for this episode was called 'Jasper's Home Movie.'

Home Movie in many ways defines the series. It reminds us of the villagers strong commitment to community and tradition and cleverly preserves it's moment in time.