Episode 4.2: Lady and the Blade 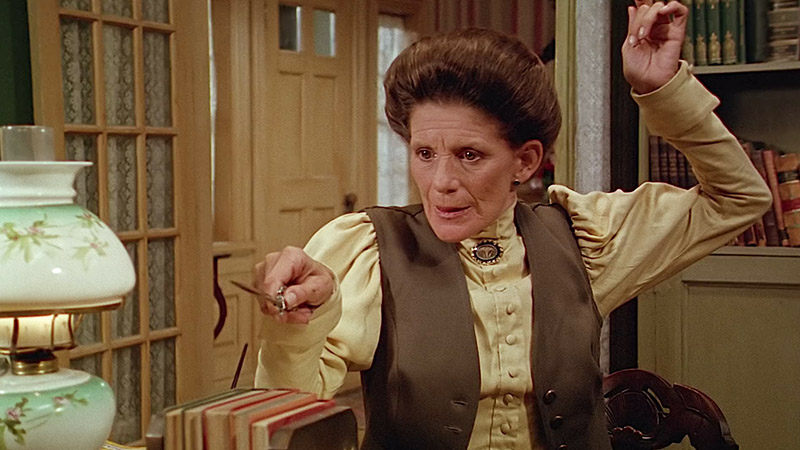 Hetty begins writing a pulp fiction romance and is infuriated when Olivia publishes it at the Chronicle. Clive Pettibone becomes the new school teacher, but his militant methods of teaching become too much for the town to tolerate.

Hetty takes a sabbatical to care for Olivia's baby, leaving her position as school teacher vacant. The school board accepts former military Colonel, Clive Pettibone, to become the new teacher, but they soon realize that his intimidating method of teaching is too strict and militant for the children.

Hetty begins writing a pulp fiction romance called 'The Lady and the Blade' and Olivia secretly publishes her works under the pen name 'H. E. La Roi Esq.' in the Chronicle. Hetty is furious, until she realizes that her works have received international royalties.

During her trip home, Hetty swerves to miss Digger (who has a bad habit of being in the wrong place at the wrong time) and drives off the road. She ventures into the former Tom Galan home for help, and ends up hitting a shadowy figure over the head with an iron skillet.

Hetty discovers that the figure was Clive Pettibone and that he is also the pulp fiction writer 'C. L. Small. After receiving pressure from the schoolboard, Clive becomes lenient in his teaching methods and retains his position as Avonlea school teacher.

The ultimate transformation of Hetty's character takes shape in this episode. Sadly, the Hetty from the first two seasons that shunned dime store novels, considered Olivia's poem 'Season's End' to be rubish, and believed that poetry should only be an act of recitation is gone.

It's implied that Hetty has kept her interest in pulp fiction romances secret, but it doesn't become apparent until this season. It's also unlikely that Hetty would mellow with age, considering that she was still in her forties during the first two seasons and remained sharply cynical and defiant toward the arts.

In essence, Hetty becomes 'The Story Woman' and there is no convincing explanation why this drastic change in her character has occured. The dramatic shift in Hetty's character has a profound effect on Sara's character as well. Hetty's new role as romantic fiction writer strips away the importance of Sara Stanley and her unique qualities as the story girl.

Consequently, Sara no longer is the rebellious free spirit that strives for artistic freedom against a strict domineering Aunt. The former story girl simply stands in the shadow of her artistic Aunt with no obstacles to overcome and an uncertain future.

It's unbelievable that both Hetty and Clive would both be anonymous writers sharing their fame on the bookstand of the general store. This unbelievable type of story line harkens back to Duncan McTavish.

Doesn't Clive remind you of Captain Von Trapp except without the charisma?

What has Digger ever been good for?

"Those that can, do." -Olivia Dale

"I even have a friend-Felix. I socked him in the nose" -Izzy Pettibone

"I'm sorry children. This is entirely my own doing. You may give me demerits." -Clive Pettibone

(1) Clive, Izzy and Morgan Pettibone make their first appearance.  Sullivan urged the importance of the new characters to the Toronto Star:

We wanted to introduce more characters in Avonlea, so that we had more mileage to play off...  Sarah (Sarah Polley) is now pre-adolescent, Felicity (Gema Zamprogna) adolescent, and both are now interested in boys or men. And says Sullivan: "We've now got three age ranges, 16 and 17, with Sarah in the middle and Felix (Zachary Bennett) still a kid... There was a joint decision to add (new) characters to keep the show vibrant and alive. My other big beef is if you can't continue to make it interesting for the audience, if you're stuck in doing the same old mold, then I think the show is in serious trouble.

(2) During AvCon 2007, Ilse Burnley discovered from Ian D. Clark (Simon Tremayne) that Clark was originally considered for the part of Clive Pettibone.

(3) In a Summer 1995 interview for the Avonlea Traditions Chronicle, Heather Brown (Izzy Pettibone) talked about her character's first appearance and how she was shocked to find out how much of her hair they were going to cut off for her tom boy role.

"They said cut it, "Heather recalled, "and I guess it didn't really kick in at the time that they were going to cut it that short... at the beginning they wanted to mistake Izzy for a boy in the first episode and so the first couple of episodes they slicked my hair back with gel and then from there they cut it a bit..."

The story line is a bit unbelievable, but the episode has it's moments.