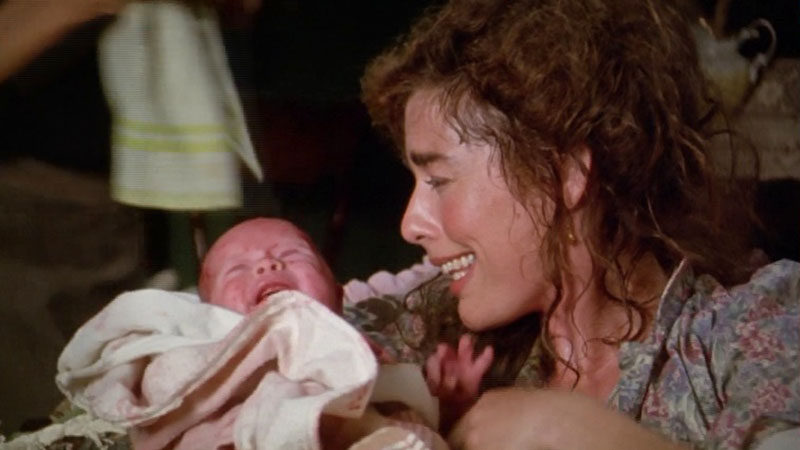 Jasper's obnoxiously wacky relatives arrive and instantly annoy the King family with their eccentric behavior. A conflict erupts between the Kings and the Dales over the name of the new Dale baby.

Jasper's obnoxiously wacky relatives arrive and instantly annoy the King family with their eccentric behavior.  The King family discovers that the Dales intend to remain in Avonlea until Jasper and Olivia's child is born; Although it's unknown why you would need so many individuals, most of whom are self-absorbed with bizarre rituals, to look after a child.

In light of this disturbing news, Hetty requests a sabbatical to become a nursemaid for Olivia (the writers must be thinking of every possible excuse for Hetty to take a sabbatical). Olivia suggests that the baby be called Montgomery, since the name has been in the King family (and it's a great tribute to Lucy Maud of course).  A conflict erupts between the Kings and the Dales over the name of the new Dale baby.

Both Olivia and Jasper disappear during this episode. Jasper goes to Markdale to find a job as a clerk after realizing that he needs a steady income to support his new child. Olivia disappears from King Farm, and in the midst of the King and Dale quarreling, goes into labor.

Jasper eventually finds Olivia at Rose Cottage and helps deliver their baby, but is devastated to find that the infant wasn't breathing. In an excellent dramatic moment, Jasper clears the airway of the infant and Montgomery survives.

It's unfortunate that an ending which is one of the best dramatic moments in the series had to accompany an episode that focused on slapstick humor.

The Dale family are incredibly obnoxious. It's just assumed that since Jasper seems awkward, the rest of the family must be equally as eccentric. This however is not the case. Jasper's mother was described as being quite normal and a bit overpossessive of Jasper, which most likely caused his social awkwardness and anxiety; and not as a result of a mad genius gene as this episode seems to imply.

There was some bad dialogue in this episode, particlarly when Olivia says, "Oh Jasper, everybody likes you. I like you."

How come the writers didn't tell the fans that Olivia was pregnant in the last season? Wouldn't it have made a great ending to the forgetable episode 'After the Honeymoon?'

Did they really need a Hare Krishna Dale to get their point across?

"One is plenty" -Hetty (commenting on accomodating a Dale relative).

(1) Tug of War was shown back-to-back with Lady and the Blade to kick off the CBC Season 4 premier.  The Two hour premier led the ratings with 1,642,00 viewers, defeating E.N.G. with 975,000 (The series that almost replaced Avonlea).1   The Toronto Star erroneously announced that Olivia's baby would be "born on the front steps of Rose Cottage.2"

(2) Sullivan recounted that there was a crisis in the negotiations with Disney before the season started that may have negatively impacted the series:

"This season was the straw that broke the camel's back. The posturing and the tactics of negotiation in the end hurt the show.  It takes a crisis situation for everybody to realize exactly what my biggest problem was. Disney would always leave it to the very 11th hour, to the point where I just said, 'Why posture? This is so stupid. Why are we doing this show?'  The parties in the co-production realized that I was royally fed up, and said they want to work out a longer term." Now, he says with a broad smile, "I can absolutely tell you 100 per cent that there will be at least one more season, if not more. The deals that we're looking at now are for Avonlea to be protected and it can go on for at least a couple more seasons.2"

(3) Mag Ruffman was told about the birth scene shortly before filming Season Four and only had two weeks to prepare. According to Mag:

My favorite episode was when I had to give birth and I didn't know how to do that and I still don't, frankly, because I never had the experience... I was living in Richmond Hill and I went to the Richmond Hill public library and it was great because they had a video called 'emergency birth... The video didn't have sound, only faces during pregnancy.  I knew how to make all the faces but I didn't know how to make whatever the sounds were, so I had a very quiet birth on camera; and I'm sure it wasn't very convincing, but at the time, it was great because they kept putting blush on my face.

(4) Mag considered the birth scene her best acting performance in the series.

(5) Surprisingly, Sullivan and Trudy Grant considered ending the series with the conclusion of season 3.

"We thought last year we'd had it with Lucy Maud and we'd done what we could do," Sullivan says. "But then we do things like a benefit for the (Toronto) Hospital for Sick Kids that Trudy organized last year and we get people lining up at 7 in the morning for an 11:30 tour of the Avonlea sets. We raised about 50 grand in four hours and we were amazed at the number of people dying to get in and going nuts to buy the actors' autographs.  "Those experiences reinforce for us that there's an audience that really wants the show to happen, and we've always felt an obligation to them. As long as there's a willing audience and we can do justice to the material, we don't want to disappoint people.3"

Amusingly, the author of the article was stunned that Road to Avonlea survived four seasons, pondering "who could have guessed there were four seasons' worth of TV episodes in Prince Edward Island?"

(6) Digger is now billed as 'Digger the dog' in the credits.

The ending saved this episode from disaster.