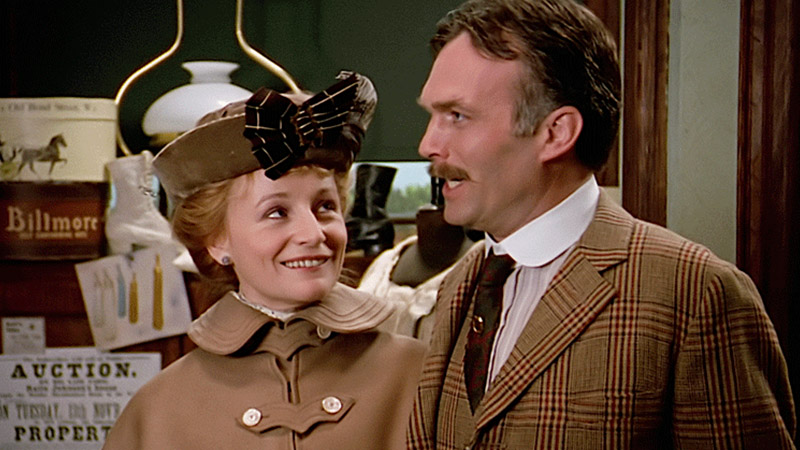 Janet King's spinster sister, Abigail is pursued by a former suitor who has returned from the Yukon a wealthy man.

A misunderstanding between Malcolm and Abigail causes Abigail to turn down her suitor's marriage proposal. The theme that 'money cannot buy happiness' is revived in this episode as Alec learns that his happiness resides not in gold seeking adventures, but with his family at King Farm. Furthermore, Malcolm learns that his money cannot buy Abigail's hand in marriage.

Sara and Felicity ride to the rescue and the Story Girl continues her exaggerated expressions with "it's a matter of life and death!" The reunion between Malcolm and Abigail is highlighted by Sara's remark about Abigail's frantic driving.

Malcolm immediately finding the egg in the haystack, while not implausible, is a bit far fetched.

"Providence knows, it's probably your last chance to throw off the mantle of maidenhood." -Clara Potts (to Abigail)

"I think it's high time that you asserted your authority, Mr. MacEwan." -Felicity King

(1) The current episode was based on the short story 'Aunt Olivia's Beau' from Montgomery's 'Chronicles of Avonlea.' In the book, "dyed-in-the-wool old maid" Olivia Sterling is the representation of Aunt Abigail in the series and Malcolm's last name is MacPherson, not MacEwan (The characters Mary and Peggy are the series equivalents of Sara and Felicity). This episode follows the plot closely, but omits the subplot rivalry between Malcolm and Alec. Another interesting note from the short story is that Malcolm purchases the old Lynde home with the hope of marrying Olivia, but Olivia objects, arguing that she does not want to be uprooted from her home in East Grafton, less than twelve miles from Avonlea.

(3) Alec claims that he is 43 years old. Janet corrects Alec and reminds him that he's 44 years old, which means that Alec was born in 1859 and he was 29 years old when he married Janet.

(4) Gemma from the avonleavillage list noted that the carriage Abigail chases near the end of the episode has a sign on the side that reads 'Dunsmore' coaches. The coach company was most likely named after Rosemary Dunsmore, the actress who plays Abigail MacEwen.

(5) Hetty is not in this episode but Jackie Burroughts receives a credit.

The episode provides insight into Alec's character, his desire for adventure and his eventual realization of the importance of his family.