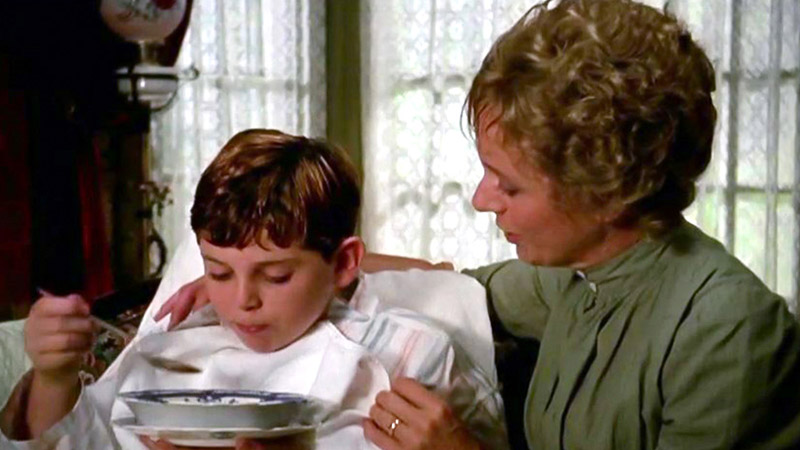 Sara convinces a reluctant Peter Craig to attend church. After enduring taunting from his peers, the King Farm hired boy becomes deathly ill and must rely on the herbal remedies of the estranged Peg Bowen for his survival.

Conversions centers around Peter Craig's alienation from the social functions of the town and Sara's attempt to integrate him into the community. Peter and Peg's status in Avonlea are somewhat similiar as each are considered heathens to some extent.

One of Peg's finest moments involves a scene where a traveling missionary pursuades her to join the congregation. After Peg is rejected by her townspeople, she cleverly reveals the hypocrisy of their so-called Christian charity.

It's hinted in Lucy Maud Montgomery's books that Peter Craig would eventually marry Felicity. The development of Peter Craig in this episode as a wimpy character made this entirely imposible in the series. He would later be replaced by a more dynamic sailor lad.

Peter's attic in Rose Cottage is located on a non-existent third floor. There are only two floors in the impossible floor structure of Rose Cottage. This was most likely overlooked (or ignored) because Rose Cottage was simply a shell and the room scenes were shot in a studio.

"I'd rather be dead than be a Methodist!" -Felicity King

"You can always size a person up by the kind of dog she keeps." -Peg Bowen (to Mrs. Ray)

(1) This episode is based on chapter 5 of Montgomery's The Story Girl, entitled 'Peter Goes to Church.' Peter mentions that his Aunt Jane had a book with the picture of the devil. Chapters 29 and 30 concern Peter's sickness.

(2) Sara fortells a prophesy that Peter will become a minister and that Felicity will marry a minister in Chapter 30 of The Golden Road. This story draws closely from Montgomery's own life and her marriage to a minister. Lucy Maud Montgomery and Reverand Ewen Macdonald were married in 1911, the same year that 'The Story Girl' was released.

(3) In Chapter 8 of The Golden Road, Peg Bowen claims that Peter's father used to be her beau and would walk her home from school.

(4) The Pinesgrove Church in Coppins Corners, east of the Avonlea site, was used as the Avonlea Presbyterian Church in the present episode, as well as the episode The Ties That Bind.

Peg Bowen's character was strongly developed as the Avonlea caretaker and some of the story lines tied well into the LMM books; but by making Peter's character so wimpy, they ruined his future in the series and reduced this episode to a side note.