Episode 1.9: Malcolm and the Baby 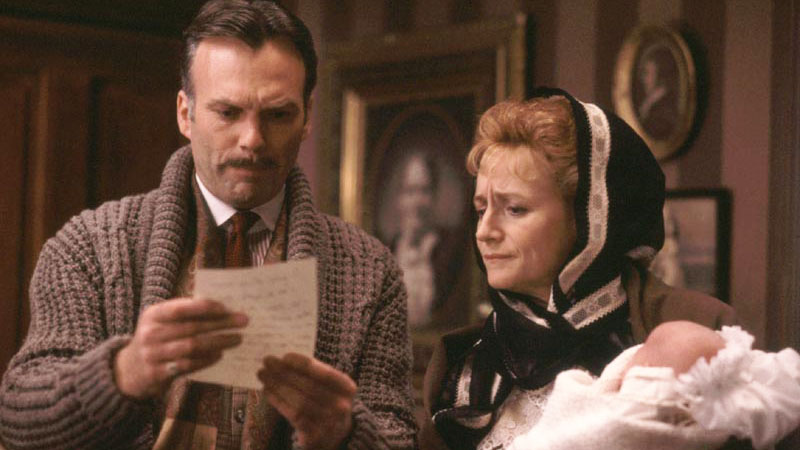 Sara and Felicity find the baby in a cluttered carriage and anonymously deliver him to the recently married Malcolm and Abigail MacEwen.

Sara and Felicity find a baby in a cluttered carriage and anonymously deliver him to the recently married Malcolm and Abigail MacEwen.  Hetty and Rachel quarrel over the adoption of the Morris baby, who's parents recently died from Scarlet Fever.

A long term quarrel between Hetty and Rachel is revealed, which further integrates the Road to Avonlea series with the Anne of Green Gables movies. Hetty claims that Rachel Lynde stole Romney Pemhallow's heart in the seventh grade.

Rachel explains that she is legally obligated to adopt the Morris baby due to the fact that Robert Morris was "Thomas Lynde's cousin's nephew." Essentially, Rachel wants the baby so Hetty cannot have him. Hetty and Rachel are two dynamic and stubourn characters who provide many hilarious moments.

Abigail insists that they are too old to care for a baby, but the 'young at heart' Malcolm disagrees. The baby, originally named Robert Morris Jr, is renamed Lucky MacEwen, after a pup from Malcom's mining company.

It's interesting to note how a tragic twist of fate (the death of the Morris parents) can completely change the identity of an individual. This concept would be explored in the second season episode A Mother's Love.

Rachel mentions that Marilla is visiting Anne and taking care of Anne's new baby. According to 'Anne 3: The Continuing Story,' Anne doesn't marry Gilbert until well over ten years after this episode takes place. This episode clearly reveals the time inconsistencies between the 'Road to Avonlea' series and the Anne movies.

"As I live and breath, you have the nerve of a canal horse!" -Rachel Lynde (to Hetty)

"It will be a fate worse than death!" -Sara Stanley (remarking how horrible it would be if the baby was raised by Rachel Lynde)

(1) In the Disney episode, the scene where Rachel slaps Hetty is edited out.

(2) The white house used for Aunt Abigail's house is located in the tiny hamlet of White Vale (between Cedar Grove and Pickering Township), on the main street across from the library. Only the exterior was used during the filming.

(3) Alec, Janet, Felix and Andrew King are featured in the credits, but do not appear in the episode.

The quarrel between Hetty and Rachel is well presented and sets up the future rivalries and reconciliations between the two women.