Episode 1.6: Proof of the Pudding 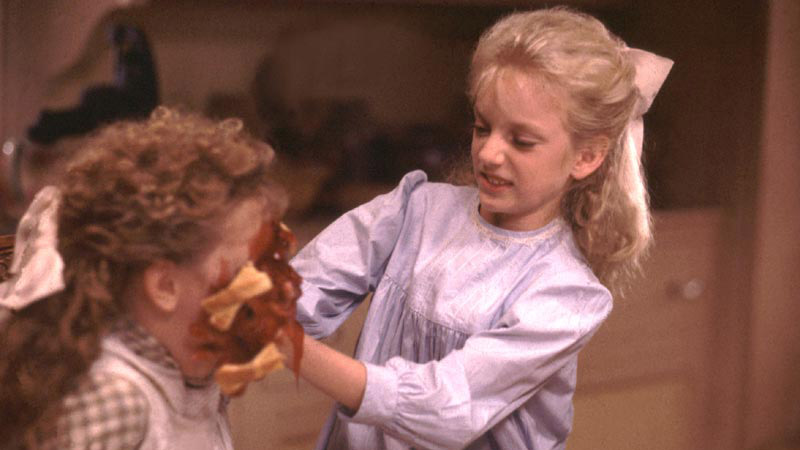 Alec and Janet celebrate their anniversary in Charlottetown and leave Felicity in charge of the King children. Hetty travels to the Governor's office to prevent an over-zealous lawyer from selling the King pond watering rights, leaving Sara under Felicity's authoritative command.

The quarrel between Sara and Felicity that began in the first episode intensifies and produces some of the most hilarious moments in the series. Felicity's bossiness is greeted indifferently by a cherry pie in her face, courtesy of Sara Stanley.

Mishaps ensue, when Felicity mistakingly puts sawdust in her pudding, rather than cornmeal; and the Governess Agnes Leslie, is mistaken for the children's tone deaf Great Aunt Eliza. The conflict between Felicity and Sara is temporarily resolved when Felicity acknowledges her friendship with Sara.

(1) 'Proof of the Pudding' was the title of Chapter 17 of LMM's The Story Girl where the mistaken replacement of cornmeal for sawdust pudding was inspired. The exception was that in the Story Girl, Sara made the mistake, not Felicity.

(2) Alec and Janet celebrate their 15th anniversary in this episode, which means they were married in 1888.

(4) The Avonlea Chronicle discussion list held a tournament to decide the Best Avonlea Episode and ranked 'Proof of the Pudding' as the number one episode.

Arguably the best Avonlea episode ever. No deep plot or significance. Only the simple, funny and wonderful moments that made Avonlea a truly beloved and memorable series.