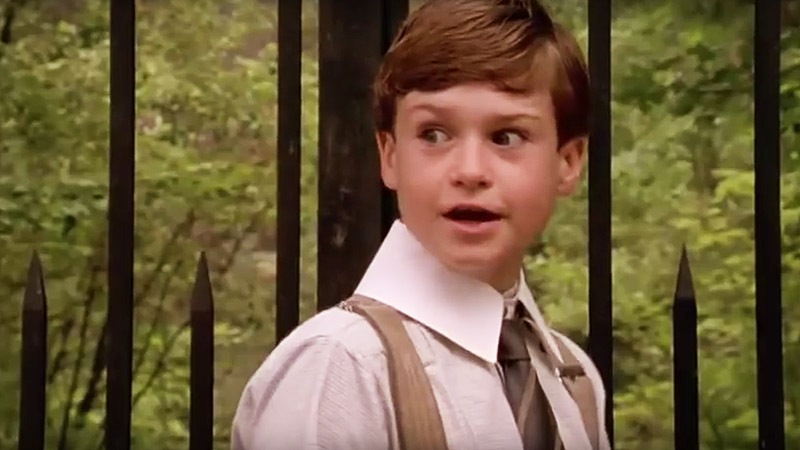 The King cousins venture near the creepy Lloyd estate where Sara encounters Margaret Lloyd, a reclusive old spinster haunted by her past.

Sara's intentions to 'make friends with anyone' continues in this episode as she gets involved in the estranged life of Old Lady Lloyd and the Lloyd curse. Hetty displays disdain when Olivia plays Ruth's piano, which clearly shows how Hetty relates tragic loss with music or musical instruments.

The main theme reveals how pride and self pity tend to separate individuals from family and loved ones.  The "Lloyd curse" prevents Lloyd from meeting Sylvia Gray, the daughter of her former beau Richard Gray.

After Felix makes several remarks directed toward Sara's mother, the Story Girl refuses to speak to him.  The quarrel between Felix and Sara provides insight into Sara's relationship with her departed mother Ruth. Sara's refusal to forgive Felix for his remarks parallels Lloyd's refusal to come to terms with her wealthy cousin Andrew Cameron as well as the tragedy of her family's dwindling inheritence.

In one scene, Peg asks Lloyd about her fascination with Sylvia Gray, as well as questioning the young singer's identity. Later, Peg comments to Sara how both Lloyd and Gray belong together. It's uncertain how Peg is able to make this intuitive leap.

Lloyd remarks that her Grandfather founded Avonlea in 1794. Hetty would later claim that the King family were the first settlers of Avonlea, but she would discover, much to her disdain, that the Ward family were the original founders (4.8: Heirs and Graces).

The giddiness between Olivia and Sylvia Gray is almost too much to bare. Were two renderings of "Have you ever seen a lassie" really necessary?

"Some people think they are too good to walk the same earth as the rest of us, let alone attend the same church." -Hetty King

"There is a divinity that shapes our ends." -Olivia King

(2) The Disney Channel called this episode "Song of the Night."

(3) According to Mag Ruffman at the 2005 Avonlea Convention, the producers originally planned for a romance between Sylvia Gray and Jasper Dale that would lead to marriage. The plan was changed however, after producers noticed the chemistry between Jasper and Olivia during an improv handshake in The Story Girl Earns Her Name (Thanks to Bobby for the lowdown).

(4) The writer of this episode, Fiona McHugh, developed the series from the Montgomery books. In the Storybook 'Song of the Night' also written by McHugh and based on this episode, it's mentioned that Andrew King is fourteen years old (page 31). The validity of this book and it's consistency with the series is questioned however, when it's mentioned that Andrew's father was 'Alan' and not Roger on the following page. In Chapter One of The Story Girl, Alan is mentioned as the father of Beverley and Felix. Roger King is mentioned as Andrew's father in The Journey Begins. Since McHugh developed the series from the books, she must have mistakingly followed the books in regard to the name of the visiting cousins' father, rather than the series.

The scenes with Sara and Felix are insightful but the darker melancholic scenes with Lloyd drag the episode down.