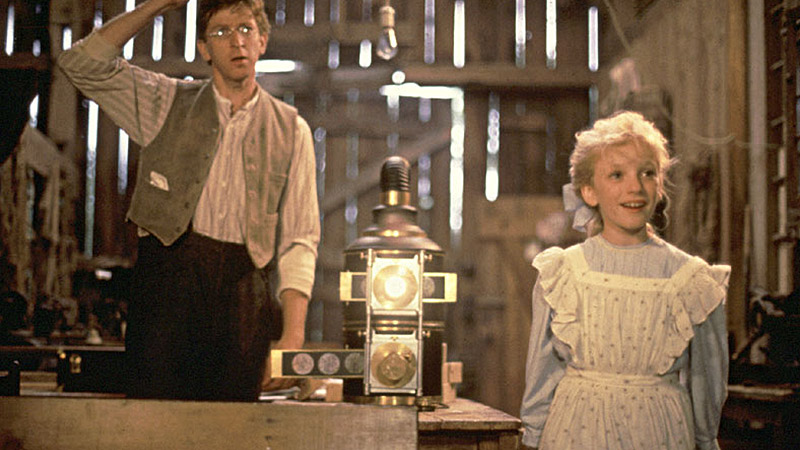 Jasper Dale is harassed by Sara's rival Sally Potts and fellow lackey Jane Spry. The girls' taunting ends in disaster when Jasper fumbles the magic lantern projector, and consequently sets the hall ablaze. Sara and her cousins confront Sally and force her to confess her actions, afterward dropping her into the leech infested school pond.

There appears to be a theme with Fanny Tarnbush that gold digging and money grubbing don't pay; however, it's interesting to note that the thief, Mr. Beedy, escapes and there is no mention that he ever pays for his crime.

At the magic lantern show, Sara renders a presentation of Hans Christian Andersen's "The Little Match Girl." It would have been more appropriate if Sara would have recited a story from the Lucy Maude Montgomery's novels "The Story Girl" or "The Golden Road." Wasn't the point of Montgomery's character to evoke the haunting tales of her ancestry? Presumably, the Andersen story was somewhat related to the subplot concerning wealthy entrepreneur Wellington Campbell's grief over the memories of his deceased mother

"Well Sara Stanley, I have never been so humiliated in all my life!" -Felicity King.

"Next to Sally Potts, Felicity is a saint." -Felix King

"Sara the story girl, what a joke. Tells a tale and it goes up in smoke." -Sally Potts.

(1) This episode features the first appearances of Jasper Dale and Wellington Campbell. Both characters appear in The Story Girl when Sara and the King cousins are asking for donations to build a Carlisle school library. The children encounter Jasper Dale in "Chapter VI: The Mystery of Golden Milestone" and find the "awkward man" to be a gentleman. In the following chapter, "How Betty Sherman Won A Husband," the stingy miser Campbell agrees to contribute to the library fund if Sara can amuse him by telling the story of his Grandmother Betty Sherman. Campbell is satisfied with her story weaving abilities, donates 5 dollars to the fund and peculiarly asks Sara to recite the multipication tables.

(2) In notes for the Road to Avonlea Original Soundtrack, composer John Welsman wrote that "For Sarah's theme, I wanted the music to suggest the kind of freedom of spirit and elegance that the young Sarah Stanley possessed -- her strength and determination as well as her softness. 'The Story Girl' theme was originally composed for scenes of her running freely through the fields near Avonlea in 'The Story Girl Earns Her Name', but after hearing it, Kevin Sullivan chose it for the 'Main Title' music for the series." The soundtrack was a special feature released with theRoad to Avonlea Complete Sixth Volume DVD set.

(3) Throughout the rest of the series, Sara Stanley focuses less on her story weaving skills, and more on her desire to mend the the romantic affairs and lost loves of the Avonlea villagers.

(4) Although they appear in the series, Fanny Tarnbush and Edward Ray are not featured in the credits.

The inclusion of a Sara Stanley tale from "The Story Girl" in place of Andersen's story would have been a nice way to draw more closely from the Montgomery books.