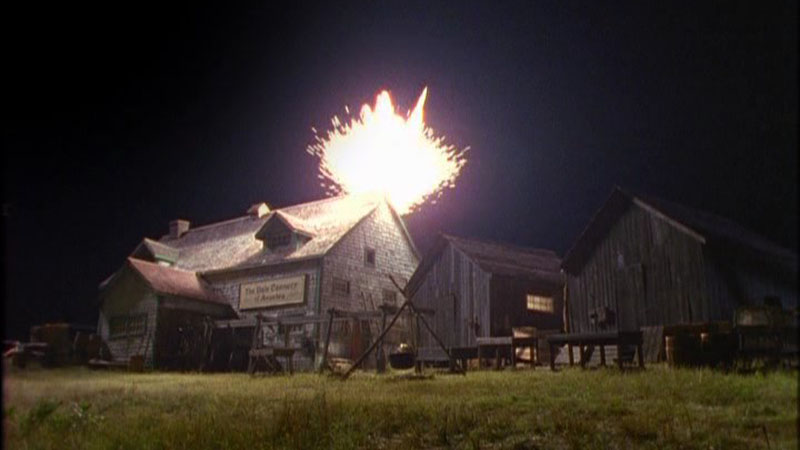 Jasper returns from England and argues against a plan to amalgate Avonlea with Carmody.

Alec helps Olivia mend the cannery's assembly line while they wait for Jasper's return from England. Olivia accepts the work request of cannery worker Lottie Cooper, who was released from the Carmody cannery. She discovers that Lottie has a child and allows them to stay at Golden Milestone.

The King family erupts in protest when Archie Gillis and Eulalie Bugle support a plan for Avonlea to amalgamate with Carmody, in which Carmody would buy out the Avonlea cannery. Jasper returns and gives a moving speech in order to prevent the town from siding with Carmody.

Similiar to Hetty's speech in Home Movie, Jasper argues against material progress in favor of community.  Swayed by Jasper's demonstration, the majority of the town rejects the Carmody proposal.

Triumph turns to tragedy however, when the Dale cannery is hit by lightning and burns to the ground.  With the realization that she will no longer be able to provide for her daughter and that Olivia has great affection for Alecia, Lottie abandons her child to the Dales and leaves Avonlea.

It's refreshing to see Olivia revealing her independent side again when she helps fight the fire and even shouts orders to the other helpers. The fiery destruction of the cannery is a stunningly powerful scene.

During his speech to the town, Jasper comments: "We won't really be having progress if we're railroaded into trading our community for promises of gadgets." This is an ironic remark considering that Jasper frequently tried to get villagers to invest in his own inventions.

Jasper's inventive assembly line techniques of the cannery represent his own desire for scientific and material progress in the Avonlea community. However, his opposition to plans which call for the same progressive measures makes him look like the towns biggest hypocrite.

This defiance of his own principles symbolically results in the ironic twist of events when Jasper's defeat of the Carmody plan coincides with the destruction of the Dale cannery.

Isn't this just like Home Movie without the camera?

So it's okay for Jasper to provide modern gadgetry, but it's not okay for anyone else to do it?

Does the name Alecia really sound like the name of Jasper's strict domineering mother?

Where is the volunteer Avonlea fire chief when you need him?

"Get that horse out of here!" -Olivia Dale

(1) In an interview with Lance E. Ghulum, Mag Ruffman commented that the only time in the series that she requested a change in the script was when the cannery was burning down.

"In the original script, Jasper and Alec ran off to fight the fire while Olivia stood in the farmhouse doorway, looking worried," she recalled. "Now what Victorian woman in her right mind wouldn't go with her husband to help?" When Mag convinced the writers to include Olivia in the scene, she gave a spirited performance. "I just loved running around and heaving water at the fire. I was so concerned about the horse being too close to the flames that it was my own idea to yell, 'Get that horse out of here!'" (The Avonlea Traditions Chronicle; Winter 1997/8 Issue No. 22)

(2) This episode is dedicated to the memory of Barbara Hamilton,who died in May 1997. Barbara plays the hilarious gossip Eulalie Bugle and is the sister of Patricia Hamilton (Rachel Lynde). Road to Avonlea would not be Barbara's only Montgomery influenced work. She also plays Marilla Cuthbert in the 1972 'Anne of Green Gables' mini-series.

This episode is basically Home Movie rehashed, but the consequences of the cannery burning down set up a conflict between the Dales and Hetty that will ultimately be resolved in the final episode.