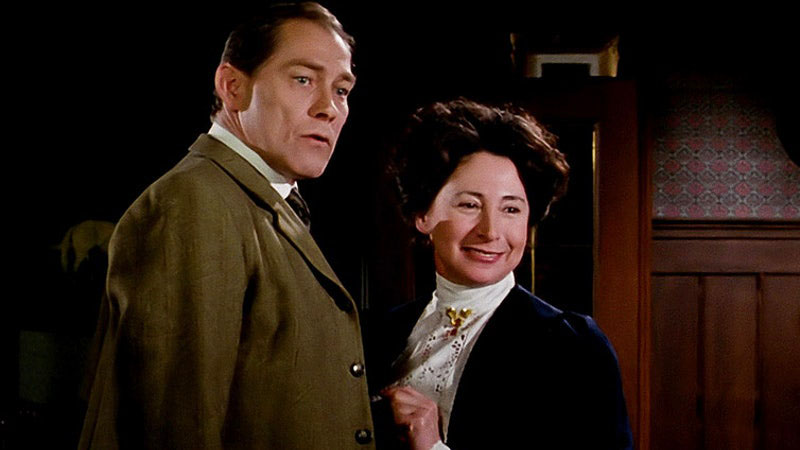 Clive proposes to Muriel, which causes Izzy to feel mixed emotions. The school children plan to buy a wedding present, but plans go wrong when Davy loses the money.

In perhaps the most unromantic moment of the series, Clive asks Muriel to marry him. Muriel accepts and her former rival, Hetty King, insists on arranging the wedding.

Davy, Dora, Izzy and the Lesters attempt to raise money to buy Clive and Muriel a wedding present. Davy encounters two ruffians, Hawk and Quint, who promise him that if he leaves money at the cemetery, the profit will double the next day.

Davy falls for the scheme and steals Dora's funds to increase the possibility of a profit. When he returns the next day with Wiley Lester, they discover that the money was gone (obviously). The Keith children find Hawk and Quint hiding in Gus's former shack and Dora devises a plan to smoke them out.

While Davy is blocking the chimney with rags, he falls through the roof. Somehow, Davy makes it out of the shack with the money unharmed while Hawk and Quint nearly suffocate from the smoke.

Izzy upsets Muriel with a picture of her mother, which causes Muriel to second guess the wedding. Matters are even more complicated when Clive is offered a position as chief attendant of schools, which would take him away from Avonlea for extended periods.  Clive tells Izzy that things will change and Izzy eventually accepts the marriage.

To Hetty's surprise, Clive and Hetty make a hasty decision and marry in Carmody. The children pool together and purchase a pirate cup for Clive and Muriel's wedding present. Clive accepts the job as chief attendant of schools and Hetty once again becomes Avonlea's school teacher.

Wasn't it funny how Clive and Davy swapped pirate books?

Wasn't that an ugly cup?

Did they have to play a variation of the Gilligan's Island theme every time they showed a scene with Hawk and Quint?

"I mean that we were horn swoggled, hoodwinked, bamboozled!" -Wiley Lester

"Then you still want to marry us... I mean father?" -Izzy Pettibone (to Muriel)

Izzy telling her father, "I won't be happy unless your happy."

(1) Have you ever wondered what the weathered building is next to the General Store? According to the Sullivan site map revised during the third season, the building was supposed to be the Ray house (Recall that the Ray house at one time in the first season used to be the Pettibone house). In this episode, you might notice that there is drapery in the windows of the house and there is a soft glow inside. You can also see lawn chairs outside, indicating that it's still a home.