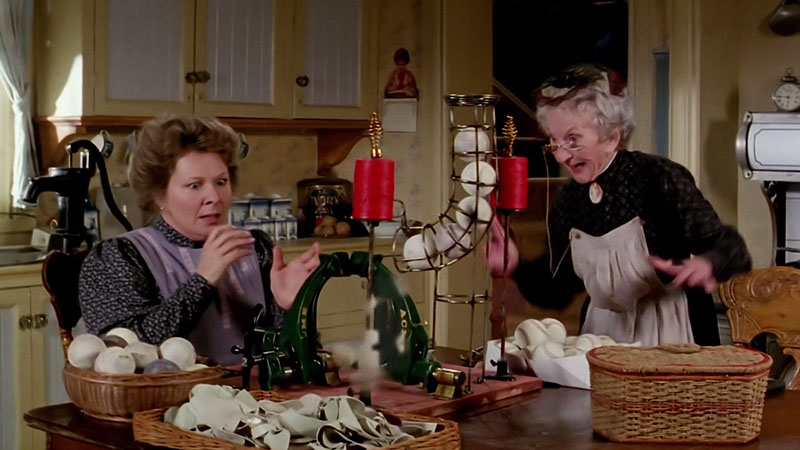 Janet begins working at home for ACME company. She finds out that the company is nothing but a scheming operation and is harassed by the owner.

Daniel takes a trip with Aunt Eliza to visit relatives and Janet suddenly feels alone in the King farm house. In order to escape the boredom, Janet starts a home business with ACME company, while keeping it secret from Alec.

Janet is shocked when she learns that she will have to sew nearly 200 baseballs and soon falls under ridiculous demands from the company owner Heath Hymus. When Digger destroys the material for the baseballs, the company arranges for Janet to pay back her debt by selling 'Bright White' soap.

Janet successfully sells the soap to most of the villagers; but a terrible outbreak of itching occurs at a Daughters of the Dominion meeting in reaction to the soap. In the subplot, Gurney MacDonald encourages Alec to have Felix join an exclusive organization called 'the Knights of P.E.I.'

In a ridiculous scene, Becky Lester overhears a conversation with Heath Hymus and confuses his name for 'his highness.' Hetty becomes convinced that Prince George is arriving Avonlea and sets up a Dominions welcome party, which coincidently interferes with a Knights of the P.E.I. meeting.

Heath Hymus, who happens to be a Knight, harasses Janet in front of Alec and Gurney MacDonald. Hymus is ejected from the Knights and from the White Sands.

Felix is inducted into the Knights.

All the coincidental events with Heath Hymus are too unbelievable. This episode also makes Hetty out to look really naive by believing Becky Lester without verifying that the royalty will be visiting herself.

Wouldn't you have liked to see Janet give Hymus a swift kick?

Unless you want to include Gurney hitting on Hetty.

(1) Felicity is registering for medical school and doesn't appear in this episode.

(2) Gurney comments that Felix is nearly 16.