Episode 6.11: What A Tangled Web We Weave 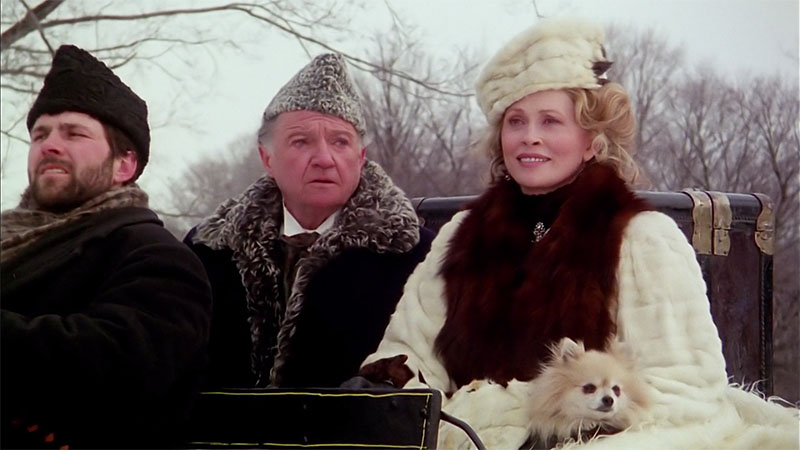 Simon and Hetty prepare for a royal wedding but mishap ensues when Pierre's mother believes that her son owns the hotel.

Reviving their teacher-student conflict from Witch of Avonlea, Hetty informs Felix that his essay is dribble. Felix is devastated when Hetty fails him from school and releases him from his duties at the hotel. Simon however, intends to retain Felix at the hotel and prepares for a royal wedding between Poland's Count Marek and Pierre's sister Adele.

Pierre's mother, Maggie MacPhee, arrives at the hotel and believes that her son is the owner. Pierre admits that he told his mother the falsehood and Simon and Hetty, fearful that they'll lose their head chef before the celebration, reluctantly go along with Pierre's ploy.

Alec convinces Hetty to allow Felix to graduate with his class and she promises to provide tutorial assistance. The groom's mother, Countess Polenska, frets about her families lost inheritence in Europe and their financial peril. The couple get married and both McPhee and Polenska admit that both their families are broke.

Hetty is out of character when she lies about being a McPhee. In fact, most of the characters in this episode are being deceptive, and none of them learn the consequences of their deceptive schemes.

Count Marek and Adele have to be two of the flattest characters in the series. These one dimensional characters suddenly materialize without a proper introduction and ramble on about their wedding plans, without giving the fans a chance to digest who they are.

The biggest problem is that this episode, and many like it that uses American actors, takes away from the chance to explore the Avonlea characters that people really care about. Special guest stars should be used as supporting characters, not the main focus. Recall that Michael York, who played Ezekiel Crane, was an effective supporting character for Gus Pike's story, which was a story that gradually develops throughout the series.

It makes little sense to make special guest stars the main focus point of a story line when they will never appear again in the series. Fans are more likely to accept special guest stars as realistic characters if they contribute to the development of the already existing Avonlea characters.

"Why can't I do anything fun? Like Pierre and Mr. Tremayne?" -Felix King

"Hetty King, have you lost your..." -Simon Tremayne

The pre-marriage sentiments between Count Marek and Adele are colder than stone.

(1) For years, the current episode was referred to as "The Daring Deception of Maggie MacPhee," but nobody knew when or how this title originated.  Apparently, this elusive title appeared in an early press release before the episode was completed, distributed through various news outlets including the Gazette, Ottawa Citizen, and the Vancouver Sun:

It's uncertain why the producers opted to change the title to the unoriginal "What A Tangled Web We Weave," unless they were trying to continue the string of unimaginative cliche titles like the previous episodes "Home is Where the Heart Is" and "The More Things Change."

(2) A so-called "funny tidbit" was featured regarding Oscar winning actress Fay Dunaway (Countess Polenska) in the 'From the Horses Mouth' section of the former official Road to Avonlea website:

"After a heavy shopping day at a popular downtown Toronto clothing store (Roots), Faye Dunaway and her driver got into a head on collision with another car at Bloor and Younge. Not wanting to deal with the incident, she jumped out of the car, hardly able to carry her massive number of parcels and ran through the streets frantically searching for her hotel while her bloody driver yelled frantically for her to come back."

(3) The eccentric actress also left an impression on Road to Avonlea cast members. In a 1995 article for The Hamilton Spectator, it was mentioned that Gema Zamprogna (Felicity King) and Tara Meyer (Sally Potts) would joke about an $18 bottle of hairspray that Faye Dunaway used the week before her guest appearance.

(4) The episode title was derived from Montgomery's novel, which in turn was derived from the famous Sir Walter Scott poem. The novel is otherwise unrelated to this episode, but it's funny to note how the book title came about.  In Montgomery's June 1, 1931 journal entry, she mentioned that publishers wanted to call the novel "Aunt Becky." Montgomery later recalled "This was absurd because "Aunt Becky" dies in the first section and the book is not about her at all." (Quote from the Selected Journals of L.M. Montgomery, Volume IV, 1929-1935," edited by Mary H. Rubio and Elizabeth Waterston, Oxford University Press, 1998).

The flat characters are a distraction from the regular Avonlea characters and their existing story lines.