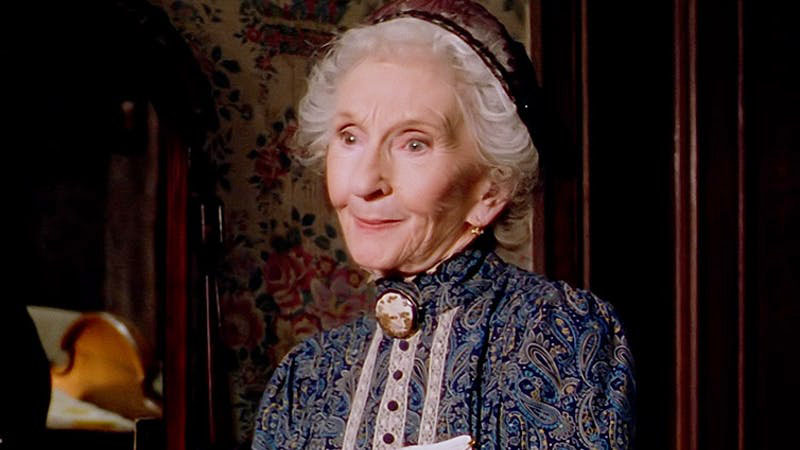 The King family celebrates Eliza Ward's 90th birthday. Eliza's cousin Winifred visits and holds a bitter secret to the past.

The King family and Abigail MacEwan celebrate Lucky MacEwan's birthday and realize that Eliza Ward will soon be celebrating her 90th birthday. The sibling antagonism between Janet and Abigail continues when Abigail criticizes Janet's plans for Eliza's party.

Eliza's cousin Winifred visits King farm in order to attend the celebration. In a role reversal of sorts, Winifred becomes the demanding nuisance that Eliza became when she arrived at King farm in How Kissing Was Discovered and Hearth and Home.

Eliza speaks of yet another beau (see criticism), Owen Bryer, who rode away to war and never returned. A bitter rivalry is revealed between the cousins over the love of the soldier, which provides evidence that while Eliza's other beaus may be speculative, Owen Bryer did indeed exist.

Winifred begins to ramble incoherently and expresses that she wants to return to England. She reveals a silver chest from Owen Bryer and tries to give it to her cousin, but Eliza refuses.

In a delusional state, Winifred believes that scrap collector Donny Lester is Owen Bryer and gives him the silver keepsake chest. When Felix investigates the loss, he becomes skeptical when Donny claims he sent the chest to the scrapyard. Molly Lester discovers her sons deceit and returns the chest to Winifred.

Dying, Winifred explains that the chest and several unopened letters inside were meant for Eliza, but was too proud to admit that Owen loved Eliza. Winifred dies soon afterward. In keeping a promise to her cousin, Eliza brings Winifred's body to England for burial.

This episode features too many rehashed stories from previous episodes. The story of the melancholic Winifred, who is too proud to admit her disappointing past, harkens back to the bitterly depressing interludes of Old Lady Lloyd. The story of the keepsake chest that hides a mysterious and tragic past is simply a rehashing of the much better told and more relevant story in The Hope Chest of Arabella King.  Furthermore, the scene where Winifred gets lost in the snow rehashes Eliza's 'lost in the snow' incident in Hearth and Home.

This episode gives credence to Kevin Sullivan's claim that the series should end because story lines were becoming exhausted. Nevertheless, it is the writers responsibility to develop new and exciting story lines, rather than scavenging through the chest of previous episode plots and attempting to mimic their contents.

The most infuriating rehashing concerns Eliza's multiple stories of lost loves and beaus. In How Kissing Was Discovered, Eliza's one true love was Timothy Cotton. In Hearth and Home, Eliza tells Felicity that her first love was a union soldier, Lyle Prescott. To complicate matters further, Eliza tells Felicity in Otherwise Engaged the following: "You may recall... I once kept a beau in waiting." For some strange reason, Eliza suspiciously changes the beau in question's name from Lyle Prescott to Romney Binscott!

This changing of stories would lose anyone, but this leads us to the current episode. Eliza's one love interest now shifts from Timothy Cotton to Lyle Prescott to Romney Binscott and now to Owen Bryer. The most current change to Bryer occurs most likely because the story line has to change to accompany this episode.

Eliza is clearly not senile and no one ever corrects or questions her on these inconsistencies, which suggests that there is a lack of continuity between the writers. It's also possible that this is an inside joke among the writers, but it seems unlikely that a joke would be the plot basis of an entire episode.

Unfortunately, this is the last time we will see Eliza in the series. Jan from Avonlea.tv: remembering Avonlea with Jan remarked that Eliza's trip to England is a terrible way to write her out of the series and it's unfortunate that she will not appear in the final episode.

How many characters now have been lost in the snow?

Isn't Eliza on a record to beat Amanda Wingfield's (from 'The Glass Menagerie') tall tale of seventeen gentlemen callers?

"When you've lived as long as I have, you'll know how precious and short this life is. Far too short for petty bickering." -Eliza Ward

(1) In an early unpublished script for this episode called "The Last Will of Eliza Ward," Eliza Ward was supposed to die instead of Winifred Ward.  The script was changed after Kay Tremblay persuaded Kevin Sullivan not to kill off Eliza Ward.

(2) The premise for this episode is strikingly similar to Montgomery's short story The Old Chest at Wyther Grange from Waverly Magazine, September 1903. The narrator recalls a childhood memory with her Aunt Winifred and a tale of lost love discovered in an old chest containing love letters that belonged to her Grandmother Eliza. Montgomery later recreates this story of a curious blue chest holding haunting secrets to the past in The Opening of the Blue Chest from the The Story Girl, which became The Hope Chest of Arabella King in the series.

(3) Lucky was 7 and a half years old in Secrets and Sacrifices. This birthday in December marks his 8th birthday.

(4) Malcolm was managing a silver mine and was unable to attend Lucky's birthday.

(5) Olivia gets the top billing in the closing credits.

The inconsistencies about Eliza's past with previous episodes makes this story difficult to believe.