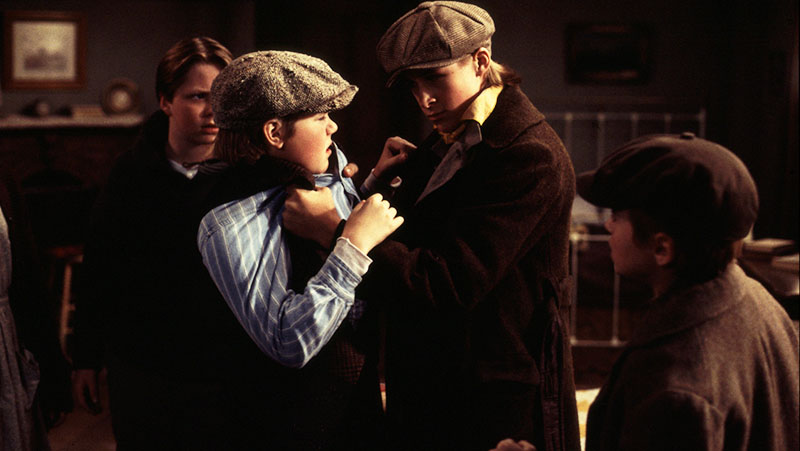 Davy befriends two english orphans, Bret and Ian McNulty, and together they pull pranks on the town.

Davy gets one month's wages for working at the blacksmith shop. He wants to buy a microscope, but laments when Hetty buys him a set of encyclopedias instead.

Janet brings two British orphans, Bret and Ian McNulty, from Charlottetown to stay at the foundling home. Davy gets into a fight with Bret but soon joins the McNulties in pulling pranks and petty robberies on the town.

Hetty punishes the McNulties and brings the ruffians to the hotel to paint the boiler room. The McNulties rig the boiler to malfunction so that they can get out of work.

Davy catches Bret stealing Hetty's emergency money from the Rose Cottage piano. Bret informs Davy that he and Ian need the money to find his brother Jim, who was arrested in Halifax. Davy steals Hetty's money and helps the McNulties find their brother.

In a scenario that makes no sense, Davy and the brothers discover that Jim McNulty was protecting the wife of a print shop owner and so the owner threw Jim in jail. The Mcnulties reunite and leave for Britain while Davy is scorned by Hetty and forced to shovel snow late at night.

Bret remarked that "if you people really wanted to help us, you'd send us back to England on the next boat." Why stop there? Please, send them far away from Avonlea as humanly possible!

It makes absolutely no sense why Davy would want to help the McNulty brothers after they were fighting with him, dumping paint on him, and treating him like a whipping boy. According to this logic, Davy's could steal Janet King's wedding ring, pawn the money, and give it all to his Uncle Willy for rejecting him and Dora.

Does Davy learn a lesson about stealing from Hetty? No, he tells Hetty that he would do it all over again. Does this mean he's willing to suffer being the McNulty's punching bag again too? Perhaps they can give him a few lashings across his back before he willingly forks over more dough.

I understand that Davy could relate to the McNulty's predicament of being orphans, but I don't believe he would be willing to award them for their abusive behavior. Rachel and Dora would usually be the ones who would straighten Davy out, but unfortunately, they play only a very small role in this episode.

Will somebody please bring the real Rachel Lynde charging back please?

Wouldn't it have been great if Gurney MacDonald had tanned the mischievous brothers' hides and gotten medieval on their english arses?

Isn't this just like 'Oliver,' except with a bad script and no likable characters?

"I don't need to save money Miss King. I'm going to spend it. That's why I saved it in the first place." -Davy Keith

"I always smell trouble a foot when boys congregate in a horde like that." -Gurney MacDonald

The McNulties reunite with their brother.

(1) Writer Laurie Pearson and director Stefan Scaini, the duo that brought us this travesty of an episode, also collaborated on the disastrous 'Anne 3: The Continuing Story.' To add insult to injury, Scaini also directed the abysmal Happy Christmas Miss King.

(2) Felicity is staying in Charlottetown. Do you blame her?

(3) The Avonlea Chronicle discussion list held a tournament to determine the Worst Avonlea Episode and ranked 'From Away' as the worst Road to Avonlea episode ever.

Fans watch Avonlea because we care about the characters. This episode gives us nobody to care about, except for perhaps Hetty because she got robbed.