Episode 6.1: The Return of Gus Pike 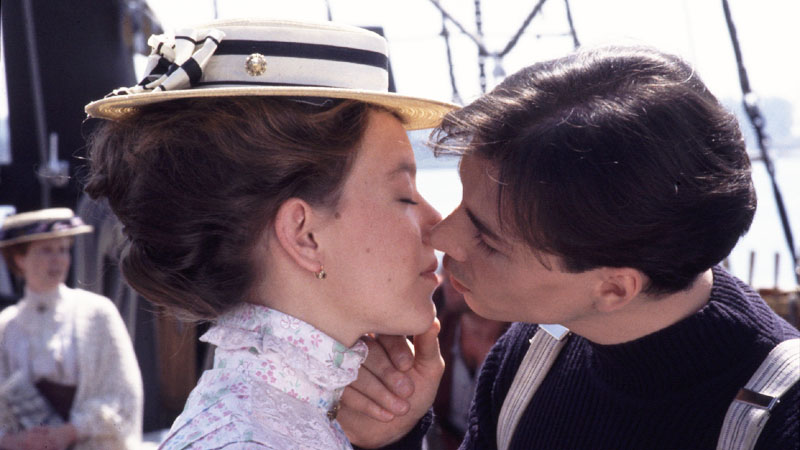 Gus and Felicity reunite after a misunderstanding and encounter a mysterious woman that holds a secret to Gus's past.

Felix helps Felicity move while she is attending pre-med school in Halifax. They spot Gus Pike talking to a woman near the ports and Felicity instantly becomes jealous.

She tracks Gus down to the residence on Brisko street and is alarmed to find that he is with the woman they previously saw him with, Charlotte Aims. Infuriated, Felicity returns Gus's ruby red ring and refuses to speak with him.

Gus finally tells Felicity that Charlotte Aims is married to the captain of his ship and that he is boarding with the couple. After a reconciliation, Gus and Felicity find a strange woman who is singing 'She's Like a Swallow.'

Gus is astounded when the woman identifies his ruby ring and associates it with Ezekiel Crane. He convinces a reluctant Felicity to take the woman back to her room, where she can avoid the harsh night storm.

After a dream in which he relives the tragedy of his mother being taken away from him, Gus becomes convinced that the woman is his mother, Eliza Pike. Felicity agrees to travel back to Avonlea with the woman and help Gus search for his past.

Shockingly, Gus and Felix dig up Eliza Pikes grave and discover that it contains nothing but rocks. The mysterious woman begins to suspiciously stack her tea cups in the shape of the 'pulpit' or 'devil's stone' from 'All That Glitters'. When she disappears, Gus recognizes the symbol and searches the coast line.

Gus finds the woman digging up a box at the pulpit stone. Inside the box is a wedding picture of Abe and Eliza Pike and another picture of Ezekiel Crane. Gus suspects that Captain Crane was his true father.  He further believed that Abe Pike discovered this and sent his mother to an asylum, claiming that she was dead.

Gus decides to journey to Jamaica with the woman and search for the elusive sea ghost, his good friend, Captain Ezekiel Crane. Before he departs, Gus slips his ring back on Felicity's finger and proposes again. Felicity tells Gus that she will always be his.

Hetty informs Gus that Abe and Eliza used to live on a farm past Pat Frewen's place, but in Aunt Hetty's Ordeal, she is completely unaware of Abe Pike's history.

When Gus, Felicity and Eliza arrive back in Avonlea, the pulpit stone is shown with no trees surrounding it. Later, when Eliza uncovers the mystery box, there are suddenly trees that magically appear around the pulpit stone.

Gus tells Eliza "I'm here now and I'm here to stay." However, Gus somehow loses his mother between now and 'Return to Me' and there is never an explanation for what happened to Eliza on their trip to Jamaica (see notes). I can understand keeping Gus's background unknown because it makes the character more mysterious, but this story line and the events that follow in 'Return To Me' are confusing from a story line perspective.

It seems odd that Gus would not mention what happened to his mother or with Crane in Bermuda in his letter to Felicity in 'Homecoming.'  By failing to acknowledge the events that occurred with Gus, Eliza and Crane in future episodes, it diminishes the importance of this episode significantly.

A Flower girl? Singing in the street? Are you sure this isn't Eliza Doolittle, instead of Eliza Pike?

How funny would it be if Henry Higgins showed up to give Eliza speaking lessons?

"She practically threw herself at him. Right there in public. It was the most outrageous display of bad manners." -Felicity King

"Yer ah part of me Felicity. I don't have no past. Meetin' you and yer family is when my life started." -Gus Pike

"It's like when ya smell the sea and ya hear the wind howling. The skies still clear, but ya know in yer bones ah storm's brewin." -Gus Pike

Felicity tells Gus "I've always been yours Gus. I'll be yours forever." This is followed by a kiss.

(1) In a September 1994 interview with Jackie Burroughs, Alexandra Heilbron revealed publicity materials to Jackie for the upcoming events of season six. One of the events provided a startling revelation:

"There's something here about Gus being with another woman; about him coming back to Avonlea with his new fiancé."

Apparently, this episode was originally going to feature Gus returning to Avonlea engaged to Charlotte Aims, despite giving his ring to Felicity in Otherwise Engaged and pledging his committed devotion.

(2) In a July 2000 interview with Kevin Sullivan at Yahoo chat, Jan from Avonlea.tv, asked the producer about what happened to Gus, Eliza and Captain Crane. Sullivan said that Crane was probably killed and that there was no intention to develop the Crane character any further on screen (Ezekiel Crane's probable death however, doesn't explain how he tried to contact Felicity by telephone in 'Homecoming').

(3) In a September 2005 Q/A chat at the Avonlea Message Board, Sullivan revealed that he fully intended for Ezekiel Crane to be Gus's father and that Michael Mahonen and Michael York played their characters with this knowledge in mind. If this is the case, it could be speculated that Captain Crane withheld this information from Gus so he could keep the treasure (with the exception of the ruby red ring) to himself.

(4) 'The Return of Gus Pike' was shown back to back with the next episode, Lonely Hearts for the CBC season six premier.