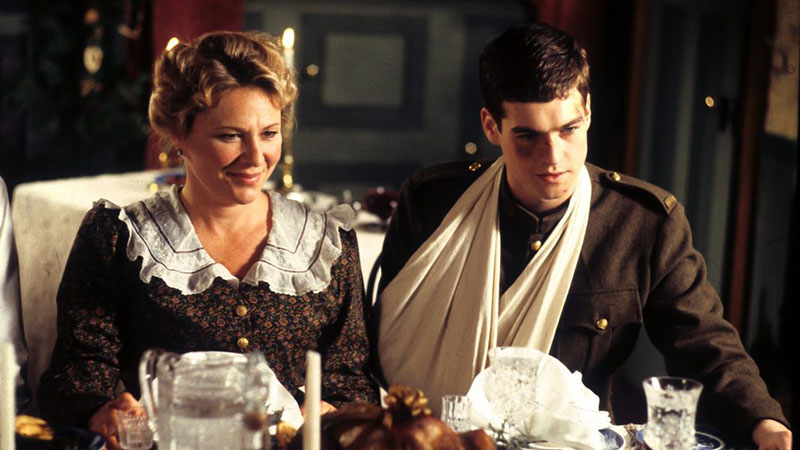 Janet is devastated to learn that Felix is missing in action and her growing resentment of the war conflicts with Hetty's patriotic fervor. While Hetty attempts to persuade a former student to perform in the Avonlea Christmas musical, she injures her back and must undergo surgery.

Turning around to see the entrance of the cave a few feet back, Josie let out an ear-piercing shriek and grabbed onto Stan's arm tightly when she saw Old Pops standing directly behind her.

Borden swung around and put his hand in his coat, "Explain yourself! What are you doing here?"

"I was jus' gonna git an eagle eye view of what you were fixin' ta do," Old Pops told him frankly.

"I know exactly what you wanted to get an eagle eye view on," he retorted as he noticed Old Pops's toothless grin as his eyes were transfixed on Josie. Borden moved Josie behind him away from the old sea pirate. "Now be off with you!" Captain Borden turned back to the cave entrance and led Josie, Belle, Gus and Charlie up the wet red sludge of the hillside as they approached the entrance.

Edward, Felicity, and Sara, were watching the curious event from down the cliff side out of the view of Captain Borden.

"Oh great," Edward whispered as a dejected old Pops hobbled down the hill, "the old timer is trying to give us away. Wait here, I'll go check it out first and when it's safe, I'll signal you." When the Captain and his group disappeared into the cave, Edward slowly crept up the hill and went inside the cave.

Sara watched nervously below as they all waited anxiously for any sort of of signal from Edward. Why was he taking so long? She shivered as the rain continued to fall and tried to keep her gaze towards the open cave.

Edward walked out and signaled to Felicity and Sara near the base of the hill. He stepped down the steep incline. "I found them and I know where they are going. Come on, follow me..."

Sara grinned as she began trying to climb the steep hill. This adventure was becoming more exciting by the moment! The rain had created a slick, muddy surface on the sharp embankment, and as much as she tried to keep a steady footing, she found herself reaching out towards a nearby tree branch to help herself remain upright. While she regained her footing, her eyes fell upon Edward, who seemed a little too smug while offering Felicity a helping hand. Suddenly, Sara felt her branch begin to bend. It was going to break! She quickly let go of it and scrambled the rest of the way up the hill, splashing only a little bit of mud on Felicity and Edward in the process. Only when she was safely at the top, did she gaze back towards the pair, and a small wave of elation swept over her as she saw their disgruntled looks.

Shortly inside, the cavern was tall and little light could get in. A cool breeze poured into the cave and could be heard whistling through the stone walls in the distance. Edward lit a match and followed the trail, arriving at a cart full of black cole. "It's a mining cart," Edward whispered. "Pioneers must have been searching for this treasure as well. Gus and Captain Borden are below..." From behind the cart, they could not be seen by the Captain. A soft glow glimmered below from Borden's torch. They heard Gus's voice...

"So Capt'n, what is this big surprise you were tellin' me about."

Captain Borden removed his watched that was attached to a gold chain, snapping it open. "He should be here shortly, if all goes as planned."

"Aye, I'm here," a voice resounded across the walls as a shadowy figure came into view.

Gus instantly knew the voice. It was as if a foggy specter from his past had suddenly become visible. As visible as the clearest blue waters of the sea... "Capt... Captain Crane!" Gus exclaimed.

"Aye it is me boy." Crane said while stepping forward and appearing in the fiery glow of the lantern light. Crane glared at Borden. "So Borden... Ya have stooped so low as ta kidnap ah lad, just to take back the treasure..."

"Capt'n Crane?" Gus said and then looked with surprise at Borden. "ya mean ta tell me that ya brought me here ta take Captain Crane's treasure?"

Edward shuddered from behind the cart. "Ezekiel Crane? I should have known he was in on this," he whispered to Sara and Felicity.

"I knew Captain Borden had devious intentions from the first moment I saw him back in Avonlea!" Sara whispered in return.

Borden took out a gun and grabbed Gus. He glanced toward Annabella and Josie. "You ladies stay back. This Crane fellow isn't sane. He's obviously bewitched Mr. Pike."

As Borden took out the gun, Annabella shrieked. "What are you doing? Have you gone mad? This wasn't part of the deal, once my father hears about this you'll be sorry. My father got you the job of Constable, he certainly can take it away...now stop all this...please, there's young children here," Annabella said as she pointed over towards Charlie and Josie. "This young boy doesn't need to see this. The only one here who isn't sane is you, he has had nothing to do with Gus, you're the one filling his head with lies."Annabella held tightly to Gus's hand not wanting to let him go.

"This was all ah set up," Gus said while bravely standing in front of Belle. "Ya tried ta take advantage of Belle's generosity just fer ah lousy treasure."

"Of course it was a set up," Borden implored. "I was just using you and this foolish boy to get what I wanted, the treasure Crane swindled me for the last time! Did you think that I would actually care for either of you?" Captain Borden cocked his head back for a hearty laugh. "Now get the jewels boy, I don't have all day!" He commanded while waving the gun at Gus and Ezekiel.

Josie quickly took a few steps backwards, her eyes wide as she looked at the gun he was holding. She looked over at Annabella. She could tell the girl didn't like her, but had no idea why...she had never done anything to her. She wanted to speak to her, but was more interested in what was happening between Gus, Borden, and Ezekiel.

Stan pointed the gun at Captain Crane. "Now, I believe we have an unsettled score Crane..."

"Ya don't want the boy Borden. Ya want the treasure!" He took out a light brown bag and pulled out a handful of glimmering doubloons and rubies. "It's all here! Ah promised the boy's mother that ah would look out fer him. Now ya remember the deal... The treasure for the boy. If the treasure's that important to you then ah'll make yer trade, and I hope you choke on it!" He tossed the treasure and it landed on a ledge between them.

"Mr. Pike, remember what I told you about Ezekiel Crane. He is nothing more than a madman, liar and a cheat. Now, go take the treasure from him and bring it back to me..."

Gus was apprehensive. He remembered trying to save Captain Crane on a ghost ship in flames and it was the last thing he remembered before everything went dark. He nodded quietly and slowly walked toward the treasure, making eye contact with Ezekiel...