The Dream of Spring

"I DO like a road, because you can be always wondering what is at the end of it." -Sara Stanley

Kevin Sullivan drove down several rural Uxbridge roads in 1984 searching for the setting that would become the maritime village of Avonlea for his production Anne of Green Gables. While looking out the corner of his car window, Sullivan spotted the Robert Nesbitt farm and found that its “sweeping landscape” resembled the “story book beauty of PEI” (Complete First Season).

The Meaning of Avonlea
Montgomery’s Avonlea has been considered an anagram for “Avalon,” meaning “island of apples” in the Celtic traditions. The most famous setting for Avalon is in the Arthurian legend, where a wounded King Arthur is carried by three queens to heal after his battle with Mordred (The Annontated Anne.., 30).

The Nesbitt farm was located on the 6th Concession of Uxbridge, only a dozen miles from Sullivan's Toronto studio. The farm and barns were filmed in reverse angles for the Anne of Green gables mini-series. The property was also filmed in Lantern Hill and painted blue when it became the King Farm house for Road to Avonlea.

Sullivan initially received criticism for not filming his Avonlea based productions on Prince Edward Island. The curator of the Uxbridge-Scott Historical Society, Allan McGillivray, defended Sullivan's decision in a 1990 letter to the Toronto Star. "L.M. Montgomery started her career in Prince Edward Island, but let's not forget that she lived her last 30 years in Ontario" (Avonlea Stories: E.4).

The novels that inspired Road to Avonlea-The Story Girl and The Golden Road-were based on memories from Montgomery's childhood. It is from Montgomery's life that we gain a greater understanding of the origin of Sara Stanley, the King family, and their imaginative world. 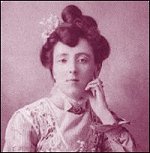 Lucy Maud Montgomery was born November 30, 1874 in Clifton (New London), Prince Edward Island to parents Clara (Macneill) and Hugh John Montgomery. When Maud was 21 months old, her mother died of tuberculosis and her grief stricken father sent her to live with her strict grandparents Alexander and Lucy Woolner Macneill in Cavendish. Maud felt isolated and would often create imaginary friends to cope with her loneliness. She read widely and began writing poems and stories that consisted of characters and locations from her imaginary world.

Evelyn Nesbit
The Face of Anne
Montgomery modeled Anne Shirley after a photograph of a young girl from the Metropolitan Magazine. The girl was later identified as American model and Gibson Girl Evelyn Nesbit. The beauty icon was entangled in scandal when her husband, Harry Kendall Thaw, murdered her ex-lover, architect Stanford White.

By the age of fifteen, Maud’s first poem was published in the Charlottetown Daily Patriot. In 1893, she attended Prince of Wales College in Charlottetown and obtained her teaching certificate. After studying literature at Dalhousie University in Halifax, Maud worked as a teacher in a one-room school in Bideford and began to have her short stories published in magazines and newspapers.

In Spring 1905, Montgomery read a faded entry in her notebook: "Elderly couple apply to orphan asylum for a boy. By mistake, a girl is sent to them." The entry inspired her to write Anne of Green Gables, the classic tale of the imaginative red-haired orphan Anne Shirley who is sent to live with Mathew and Marilla Cuthbert. The setting of Avonlea and Green Gables was loosely based on locations in Cavendish.

Published in June 1908, Anne of Green Gables was an instant success, selling 19,000 copies in its first six months. “I candidly confess that it was to me a proud and wonderful and thrilling moment,” Montgomery wrote in her journal after receiving her first copy. “There, in my hand, lay material realization of all the dreams and hopes and ambitions of my whole conscious existence."

Following her grandmother’s death, Montgomery married Presbyterian Minister Ewan Macdonald and moved to Leaskdale Ontario where Ewan accepted the position of a parish minister. Montgomery wrote eleven of her novels at the Leaskdale home, including The Story Girl and The Golden Road.

"I consider The Story Girl the best piece of work I have yet done. It may not be popular as Anne--somehow I don't fancy it will. But from a literary point of view it is far ahead of it." -L.M. Montgomery

Many of the tales in The Story Girl are derived from Montgomery's own family stories and childhood experiences. She relished interweaving these memories into the narrative of The Story Girl and held a great fondness for the work. In a November 29, 1910 journal entry, Montgomery wrote:

I had just finished my book The Story Girl. I was sorry to finish it. Never, not even when I finished with Anne, had I laid down my pen and taken farewell of my characters with more regret. I consider The Story Girl the best piece of work I have yet done. It may not be popular as Anne--somehow I don't fancy it will. But from a literary point of view it is far ahead of it. It is an idyl of childhood on an old P.E. Island farm during one summer. I have written it from sheer love of it and revised it painstakingly--up there by the window of my dear white room. (SJ 2: 20).

Days of Dreams and Laughter
Montgomery dedicated The Story Girl to her cousin Frederica Campbell of Park Corner, "In Remembrance of Old Days, Old Dreams, And Old Laughter." They knew each other in childhood and were best friends as adults. Maud was grief-stricken when Frederica died in 1919 of the Spanish Flu. Rilla of Ingleside (1921) was dedicated to her memory.

The Story Girl's interactions with her King Cousins may have been influenced by Montgomery's own childhood remembrances. According to Jennie Macneill of Cavendish, Felicity and Cecily may have been modeled after Maud's cousins who lived on her Uncle John Macneill's "neighboring farm": The beautiful Lucy Macneill resembled Felicity and delicate Kate Macneill resembled Cecily who similarly died in childhood (Wiggins, 111).

Elizabeth Epperly contends that these interactions are more "closely modeled than her diaries or letters will show on actual episodes with her 'merry cousins' at Park Corner and with Well and Dave Nelson, the two little boys that boarded with the Macneills in Cavendish" (231). 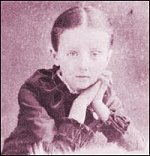 Maud at age 8, around the time of the
'Ghostly Bell' incident.

In her autobiography, The Alpine Path, Montgomery described delightful memories with Dave and Wellington, as they "ranged happily through fields and orchards or in the long winter evenings by the fire." One memory in particular sparked the creation of Peg Bowen, the only character Montgomery admitted creating from life.

The origin of Peg Bowen was derived from Mag Laird, a Cavendish eccentric who scared an eight year old Maud, Wellington and Dave. Montgomery described Mag as a "harmless creature who wandered begging over the country side, and was the bugbear of children in general and Dave in particular." Montgomery recreated a scary childhood experience regarding Mag Laird in "The Ghostly Bell" from The Story Girl, where Peg Bowen represents the frightening Mag Laird character that spooks the King children.

The Golden Road picks up where The Story Girl ends, but the tone and atmosphere is different between the two novels, “suggesting the contrast between recreation and nostalgia.” Epperly observed that in “The Story Girl we witness life; in The Golden Road we hear Bev remembering... Would we really rather read his sweetly melancholy memories of springs long past than feel the active, eager chafe of the spirits he is supposedly trying to capture? (232-233)”

Golden Road Woes
Montgomery further hinted at her disappointment with the novel in a December 1919 journal entry. While attending a concert to aid the Zephyr Library, scholars performed a play derived from "Great Aunt Eliza's Visit" from The Golden Road. She enjoyed the play and remarked that it had a "freshness" that the "printed page lacks."

At the time The Golden Road was written, Montgomery became exhausted balancing the social obligations of a minister's wife with motherhood and the constant demands by her publisher to produce novels. The Golden Road was "written in odds and ends of time and left a disagreeable impression of unfinishedness" in Maud's mind. In a letter to George MacMillan she wrote that the book was written "in a hurry and turmoil (MacMillan)."

Montgomery died on April 24, 1942 and was buried in the Cavendish cemetary. As she predicted, The Story Girl never achieved the popular and critical success of Anne of Green Gables. The stories of Sara Stanley and her King Cousins would remain in relative obscurity for decades, until they were rediscovered by Sullivan.

"If you looked at villages from the turn of the century in Prince Edward Island this one would very much resemble the classic P.E.I. village." -Kevin Sullivan

In summer 1989, Sullivan's production designer Perri Gorrara was transforming the Coppins Corner property into a representation of Montgomery's early 20th century P.E.I. village. "If you looked at villages from the turn of the century in Prince Edward Island this one would very much resemble the classic P.E.I. village," said Sullivan. "Unfortunately, those places don't really exist on the island any more (Wagner, B.1)."

Leaskdale Manse
Montgomery's Leaskdale Manse was designated as a national historic site of Canada in 1994. The Uxbridge manse marked a productive period of her literary career when she wrote 11 of the 22 published works during her lifetime, including The Story Girl and The Golden Road."

Guarding this area was a 24-hour security guard, hired to prevent vandalism. Any visitors able to get past the secured gate and unfamiliar with the series would notice the peculiar setting; skeletal buildings of an imaginary early 20th century village and a lighthouse surrounded by a farmer's field with no water for miles. The rocks were spray painted red and red bricks were crushed and scattered on the roads to reflect the red roads of Prince Edward Island. The bridge was set on wheels so it could be moved for passing vehicles.

While most of the set buildings were shells, the interior sets used for filming were located in Sullivan’s Eastern Ave. Toronto studio. The exception was the schoolhouse with an interior used for filming. Footage of P.E.I. was interwoven into the scenes for authenticity.

With the stage set, Sullivan was about to embark on the most expensive television production in Canadian history. This was quite a gamble for a series based on a largely unknown and untested Montgomery heroine that received little attention outside Montgomery literary circles. It took nearly eighty years since the author penned her novel, but the long wait for recognition might be best reflected by the The Story Girl's hopeful narrator and his dream of spring:

Rich were we in the memory of those opulent months that had gone from us--richer than we then knew or suspected. And before us was the dream of spring. It is always safe to dream of spring. For it is sure to come; and if it be not just as we have pictured it, it will be infinitely sweeter.

Montgomery's vision of an "idyl of childhood on an old P.E. Island farm" was about to finally be cherished the world over.