Episode 7.3: Davey and the Mermaid 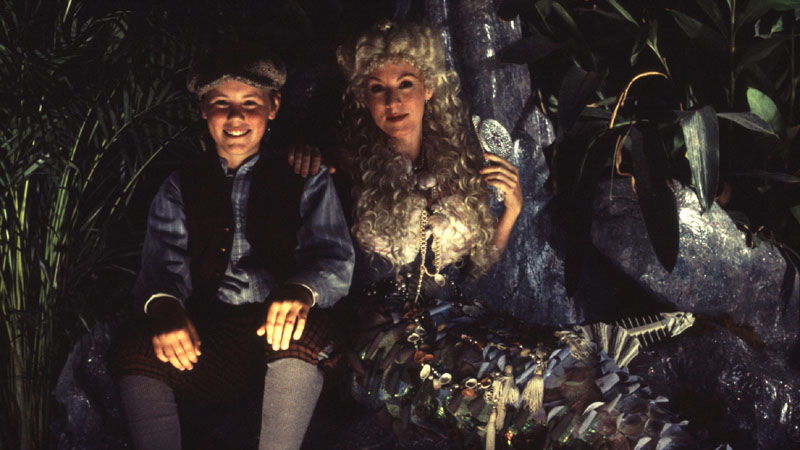 A travelling Midway comes to Avonlea and Davey falls under the spell of the beautiful mermaid, Melusina.

Davey makes Becky pull a trick on Dora and gives her a scare inside the lighthouse. They all receive a scare of their own when they see Rachel descending from the lighthouse dark staircase.

'Snibb's World Renowned Travelling Midway' arrives in Avonlea and Davey becomes infatuated by the mermaid Melusina. Donny makes fun of Davey for his bewitchment and yet becomes interested in the Midway assistant Trissy (who happens to be the mermaid of Davey's affections).

Davey is caught sneaking around the Midway, but insists on returning to see Melusina. It's funny how Davey yells out the window at Becky later that night, telling her that he's going back to the Midway. You would think he would have waken up the entire household, informing them of his scheme!

Trissy cons Donny into forking over money and Hannah leaves in disgust. Donny and Davey eventually discover that they have been conned and that Melusina and Trissy are really the same person. Hetty and Rachel rush to the rescue with the constable and irate townspeople, who arrest Snibbs for his schemes.

In a conversation concerning Davey, Rachel comments that "wouldn't it be terrible if he lost the imagination that made him want a mermaid to be real." Since when did Rachel Lynde adopt such an idealistic view? I know she had a stroke that would have given most anyone a new outlook on life, but it shouldn't have changed her into Anne Shirley! It's bad lines like this that make me want the real Rachel to return and put Davey in his place!

In one of the most unbelievable scenes, Hetty slowly swings at Goliath with her umbrella and drops him to the ground. I actually like a lot of the tongue in cheek humor of this episode, but it's too much to ask to believe that Hetty could actually lay a wrestler out flat cold with her umbrella. This was the same guy that slammed Donny with an airplane spin maneuver.

After the ordeal with the Midway carnies, Hetty and Davey go to the lighthouse for a really pointless conversation. There is no clear explanation why they are at the lighthouse, except it gives Hetty another ridiculous reason to act completely out of character.

The message for this episode seems to be that the imagination should be explored freely and that rationality often prevents the imagination from flourishing; However, it was Davey's imagination that made him gullible enough to believe in the con-artists schemes in the first place. In fact, the message completely contradicts the characters' behaviors at the end when they rallied against the corrupts carnies.

Shouldn't Hetty have at least lectured Davey on the dangers of trusting strangers at the carnival? You would think so, considering the panic she underwent when Sara was kidnapped by Isis and Leo in Sara's Homecoming. There is nothing in this episode which suggests that having an imagination is a good thing, since it makes you vulnerable to schemes and corruption.

Isn't it strange seeing Blair Stanley's picture on the wall of Rose Cottage, considering his heated rivalry with Hetty?

"Don't you speak to me you flossy flirt." -Hetty King (to Trissy)

Rachel swoons that "life is a wonder," in regard to Davey seeing the mermaid. Rachel Lynde was soaking herself in sap in this episode while trying to do her best Anne Shirley imitation.

Donny was pretty funny, but this episode really needed the old Rachel Lynde to put it in perspective.